Beyond the PDF Trip Report

A couple of weeks ago I was in San Diego, USA for the Beyond the PDF meeting. Other parts of the country were a bit snowed under, but in San Diego it was like a Brisbane winter, with students at UCSD getting around in shorts and ugg boots. The trip was paid for by my employer, USQ, although I was handed a reimbursement form for some of the expenses so we may be able to claim some of it back.

In this post I'll look at the goals of the meeting what I contributed, what I thought of it and what might happen next.

The goal of the workshop was not to produce a white paper! Rather it was to identify a set of requirements, and a group of willing participants to develop a mandate, open source code and a set of deliverables to be used by scholars to accelerate data and knowledge sharing and discovery . Our starting point, and the only prerequisite to participating, was the belief that we need to move Beyond the PDF (meant to capture a common philosophy, not necessarily to be taken literally).

In a heady moment we might also describe our efforts as the desire to contribute to the development of a free and open digital printing press for the 21st century. A platform, when utilized, moves us beyond a static and disparate data and knowledge representation to a rich integrated content which grows and changes the more we learn. A system (content plus platform) from which a scholar can interact and once evaluated shows improved understanding and interest.

I said on the list before the conference what my aims were:

1. What at the end of three days do you want to have achieved by attending the workshop?

I'd like to see (a) some progress in defining at least one re-engineered scholarly process for data-supported research publication, which will meet the current needs of researchers for recognition via traditional metrics and have a clear business model (in the broad sense) as well as show the way to the future of data-integrated, reproducible research, and (b) properly resourced projects to begin implementing at least one such model.

I hope the workshop can assist us with prioritizing and planning the various strands of our open source work on authoring tools, annotation and multi-format repositories. I note that one of the most useful signals for such prioritization would be funding that meets the goals in 1.

I think we made some progress on (1), and there is some hope for (2) – we have a demonstration system that my team is putting together now, and we can see if that can be used as a platform for funding applications, and as a way to generate feature requests from the Beyond the PDF community.

I put in an long abstract for a presentation which covered how I think the suite of systems built by my team can contribute to open, data-supported research and publication process. The presentation slots were only 15 minutes, though, with just ten for the presentation part so I tried to look more at some of the issues and try to start some discussion, and assume that people would read the presentation and get a sense of the scope of the tools we have built. Not sure that approach really worked. I think I might have been better off doing a demo – as I got a much better reaction from the demo I did to the writing tools group late in the conference than I did to my talk. You can watch on YouTube if you really want to, but I recommend reading over listening to me rush through the stuff I wanted to say, going 'ah, um' a lot in workshop thinking on feet mode.

I have attached my presentation to this post using our the ReDBox research data management system that we'll be using as a demonstrator – the PowerPoint has been ironed out into a series of pictures, imagine the same for spreadsheets and other data in the research artefact of the future.

I tried to hit important themes rather than specifics. One point I wanted to make was that we can't assume that if you build it, they will come. That is, we can make what we think are nice commodious systems for researchers but nice is not enough. I used the analogy of a chook house (that's chicken coop to you non-antipodeans) – I showed a picture of one my family built for our chooks to live in, so they don't get eaten by someone's dog and so the eggs get laid in the right place. But this summer we have had a trio of young pullets who went a bit feral. We didn't have time to teach them to live in the house with the old girls before we went on holidays, and they ended up sleeping in trees, and laying eggs under the house, and lately the trampoline, and maybe other places. This is soluble, we (think) we know how to manage the flock, and teach them to live happily in their chook house, but the point is that the chooks didn't use the purpose built chook facility just because we built it. The repository crowd will know what I'm talking about.

In a similar vein Phil Bourne, the workshop organiser kept reminding us to consider reward mechanisms, it's no use building 'better' systems that don't suit the researchers, we need to give them reason to use them. In the case of scholarly communications, though, this is BIG change and there are very entrenched players and processes so change is slow and hard. I know from reading and hanging around with Peter Murray-Rust just how hard this change is proving to be in chemistry, but there are success stories like the Public Library of Science where Open Access publishing has started to catch on. There was some talk of build Beyond the PDF stuff on the PLOS platform.

The workshop was a lot to take in, like most conferences, but this one was very focussed. Still, trying to follow both the in-room discussion and try to assimilate all the new and challenging stuff and the twitter-fall was very challenging. I can't hope to capture all of it.

Short talks (see program, webcasts, twitterfeed and twitter archive) were followed by discussion and the major issues identified leading to a La Jolla Manifesto (under review) and a set of deliverables to move us towards common goals. One major goal is to use our tools to have some positive impact on the understanding and treatment of spinal muscular atrophy (SMA).

The workshop has spawned a series of working parties looking at different issues.

The two I have paid the most attention to, and the two which have content on the web site at the breakout session page are:

There were some people at the workshop who are very interested in being able to represent scientific claims as formal RDF statements (nanopublications), the idea being that we will have machine readable, and perhaps machine understandable science (it was all science – hardly a mention of the humanities that I heard). My opinion is that formal semantics are almost certainly useful at the level of statements like “Peter Sefton wrote this document” and may prove to be useful in some of the hard sciences. I keep arguing that one of the places we should start to build semantic web or nanopublication experience in metadata where we have known, identifiable (but as yet not consistently identified) parties (researchers, publishers etc) and identifiable versionable products (papers, data sets, pictures etc) that can be related to each other with formal statements. These are universal to all research and scholarship. If we can start to reason just at the level of who wrote what, and what data sets belong where then that's a good start. But that's a big if – metadata is hard enough without adding RDF to the mix.

I want to start with metadata, then maybe we can move on to dealing with how to get machines to reason about statements like “Mosquitoes transmit maleria”; where the arguments get pretty complicated pretty quickly.

These are the things I will be working on with my team: 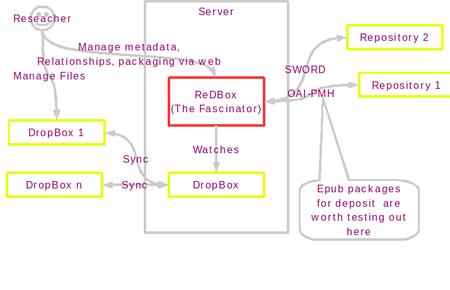 The work we're doing on on the using ReDBox to manage files on a shared drive will:

Bringing the web to the researcher 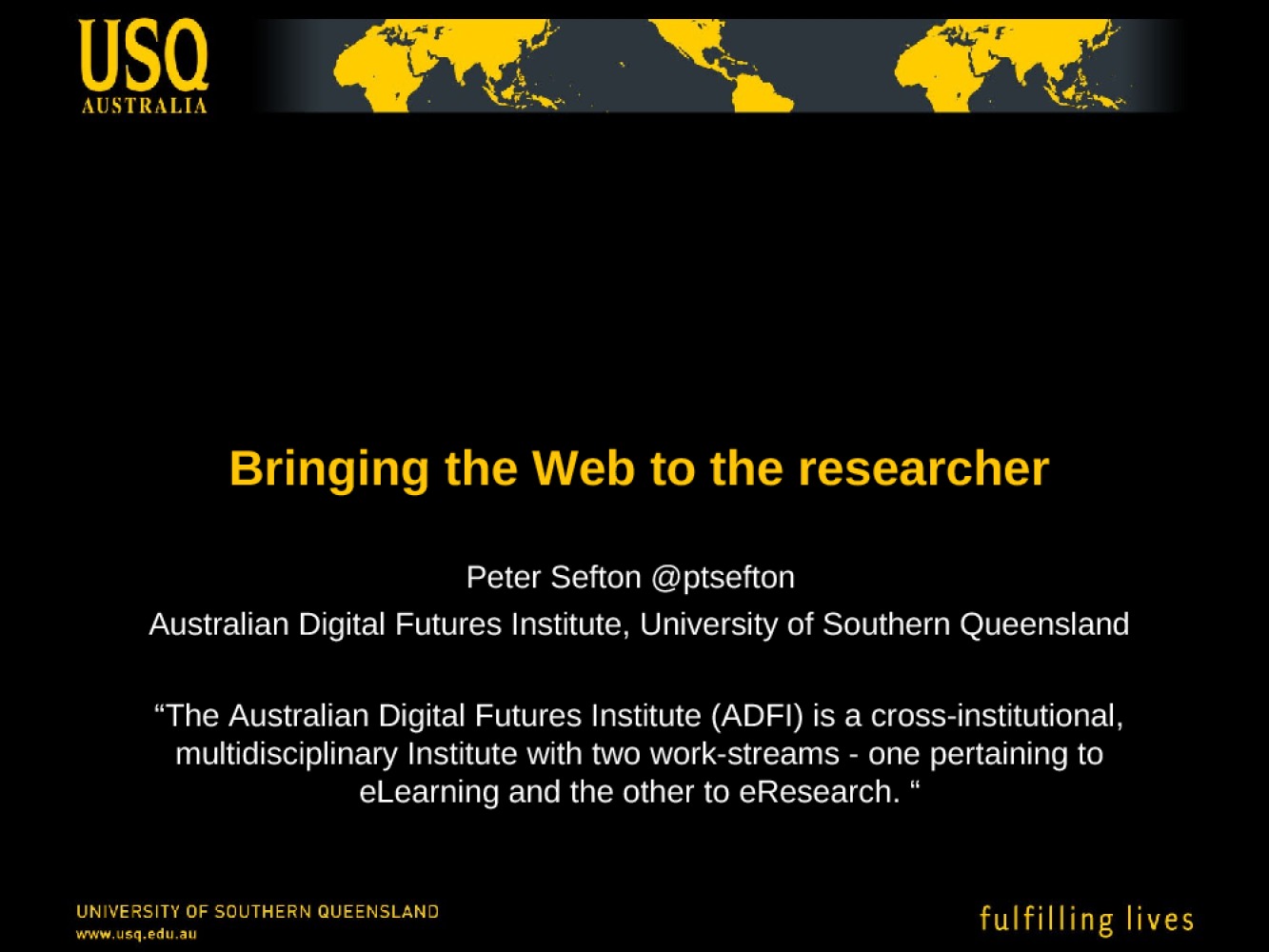 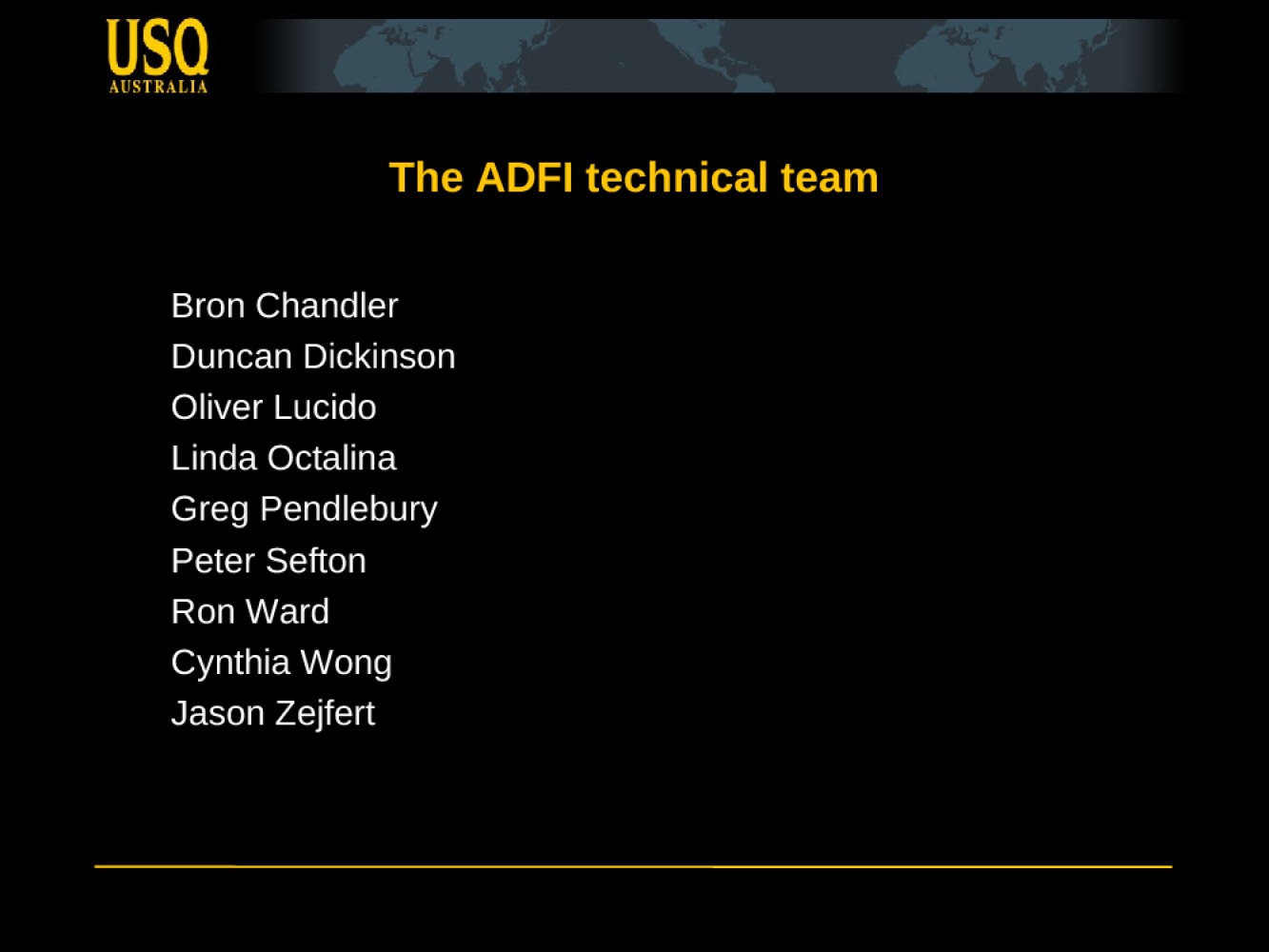 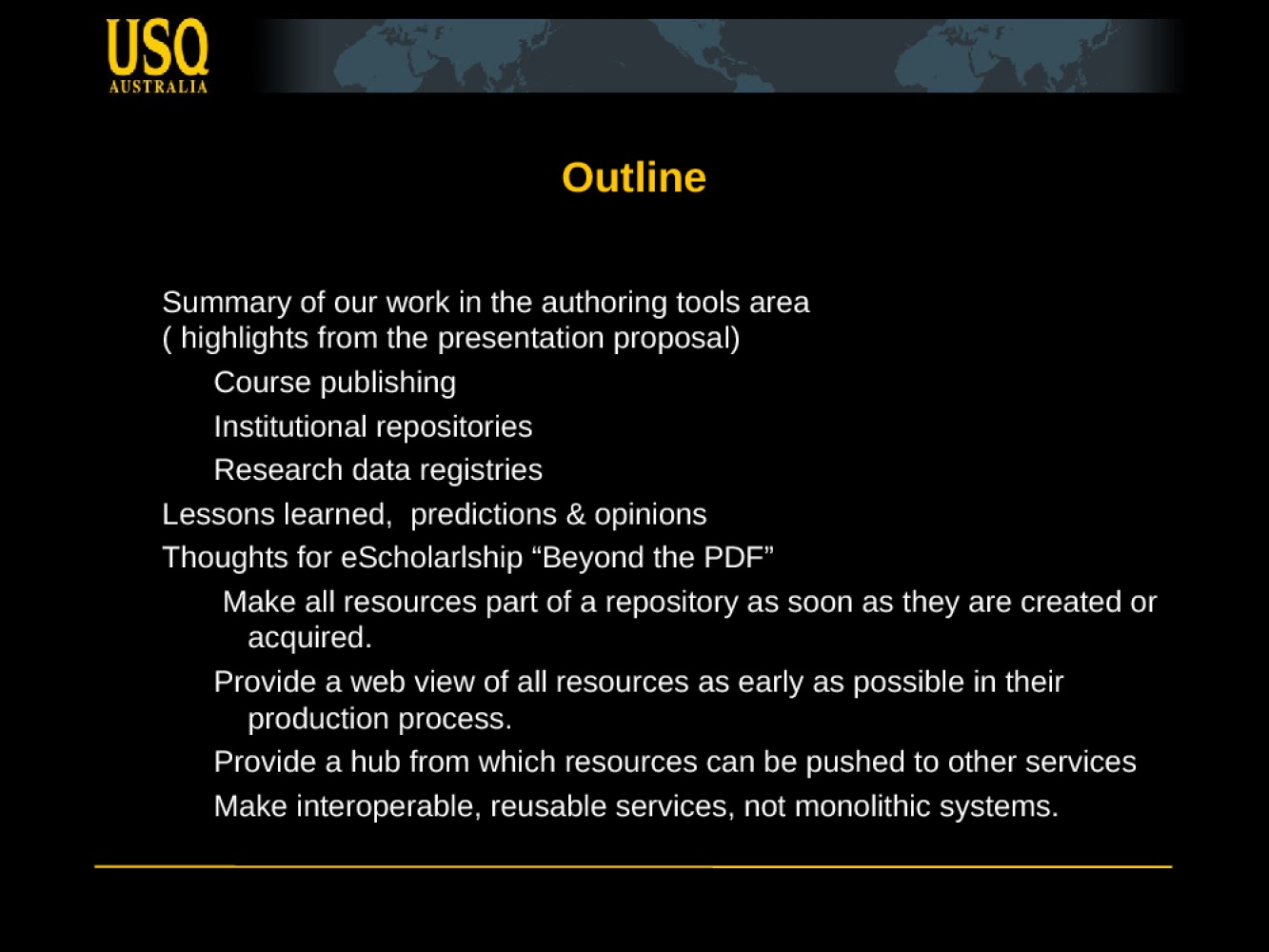 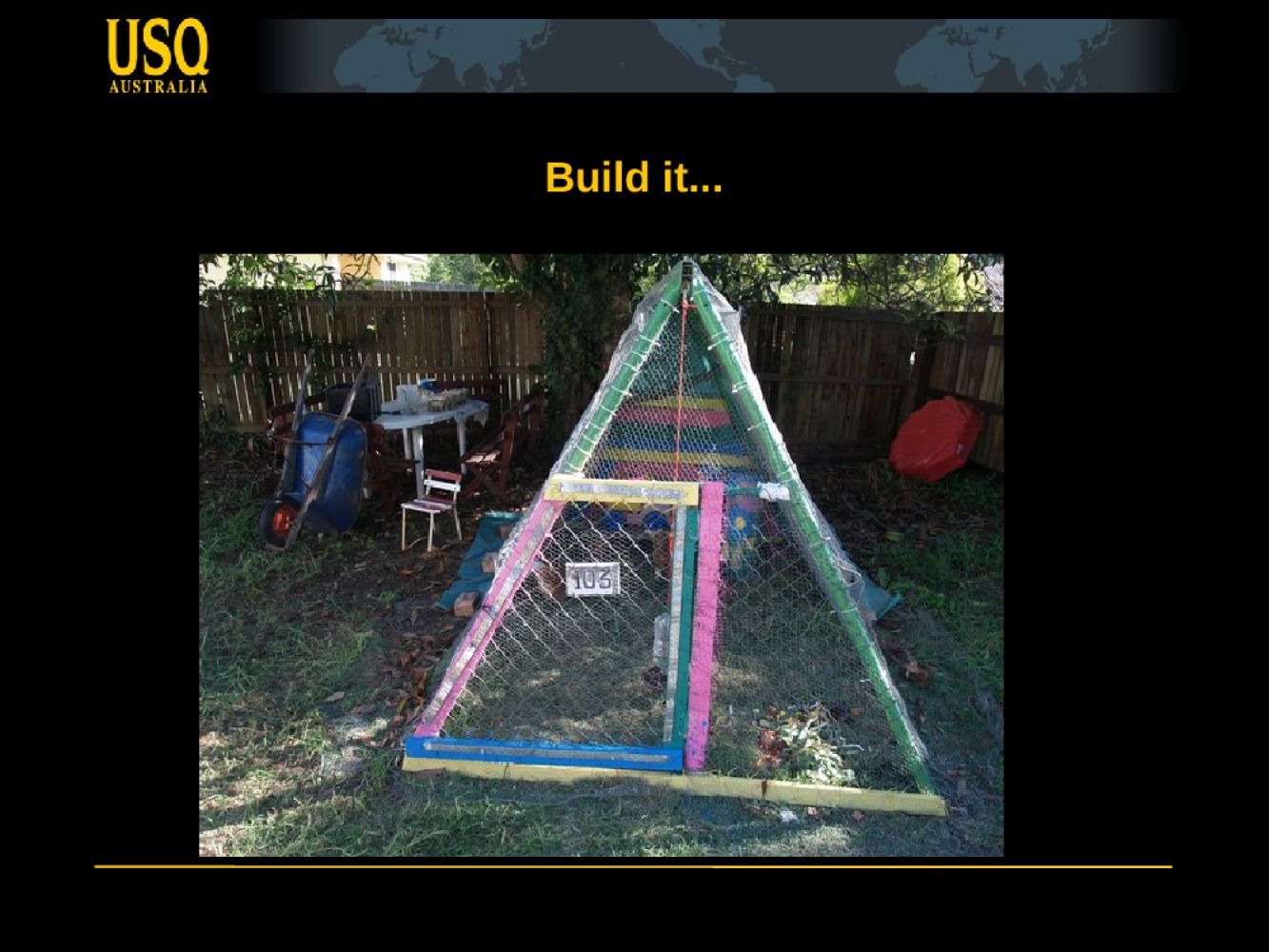 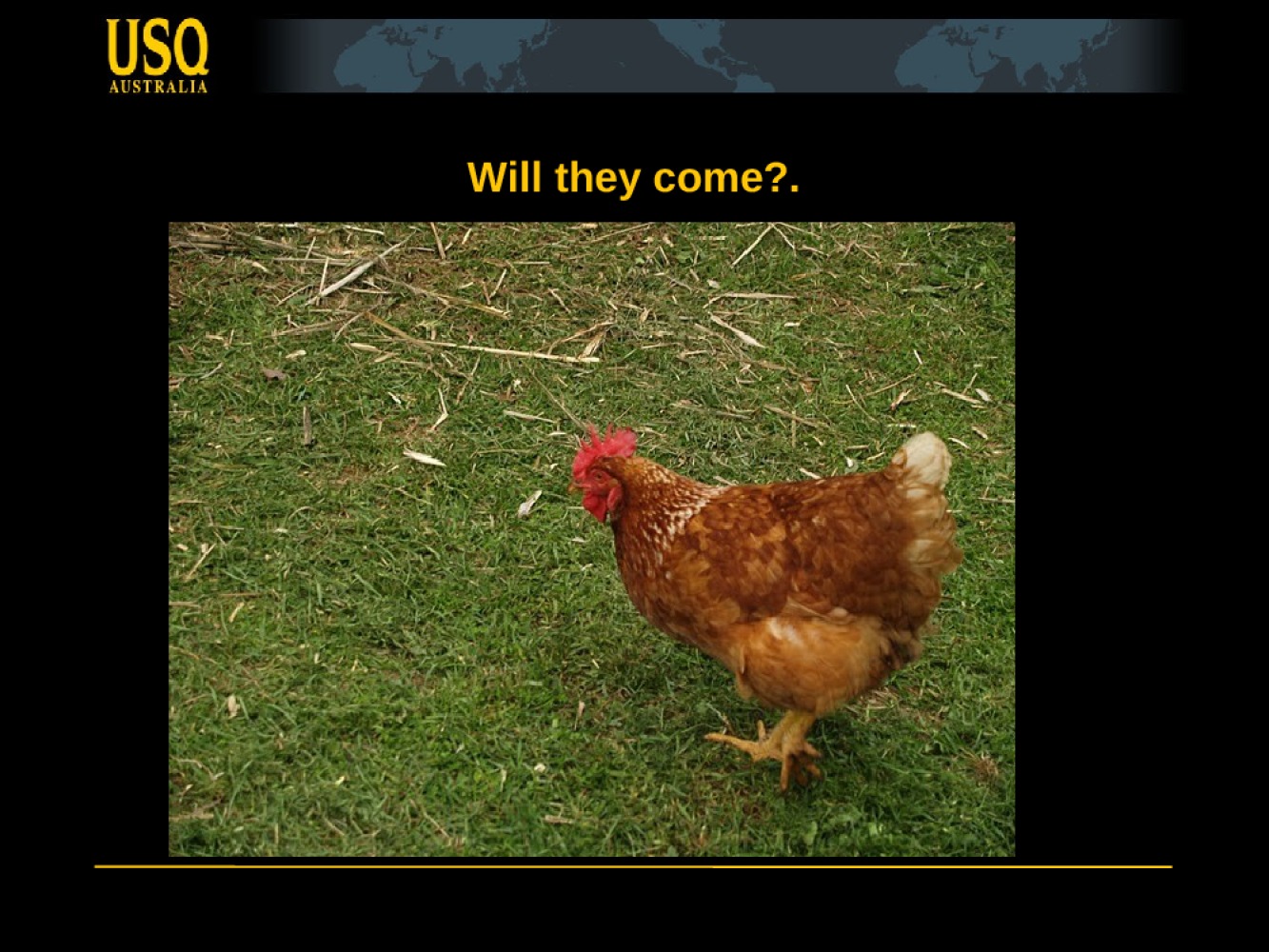 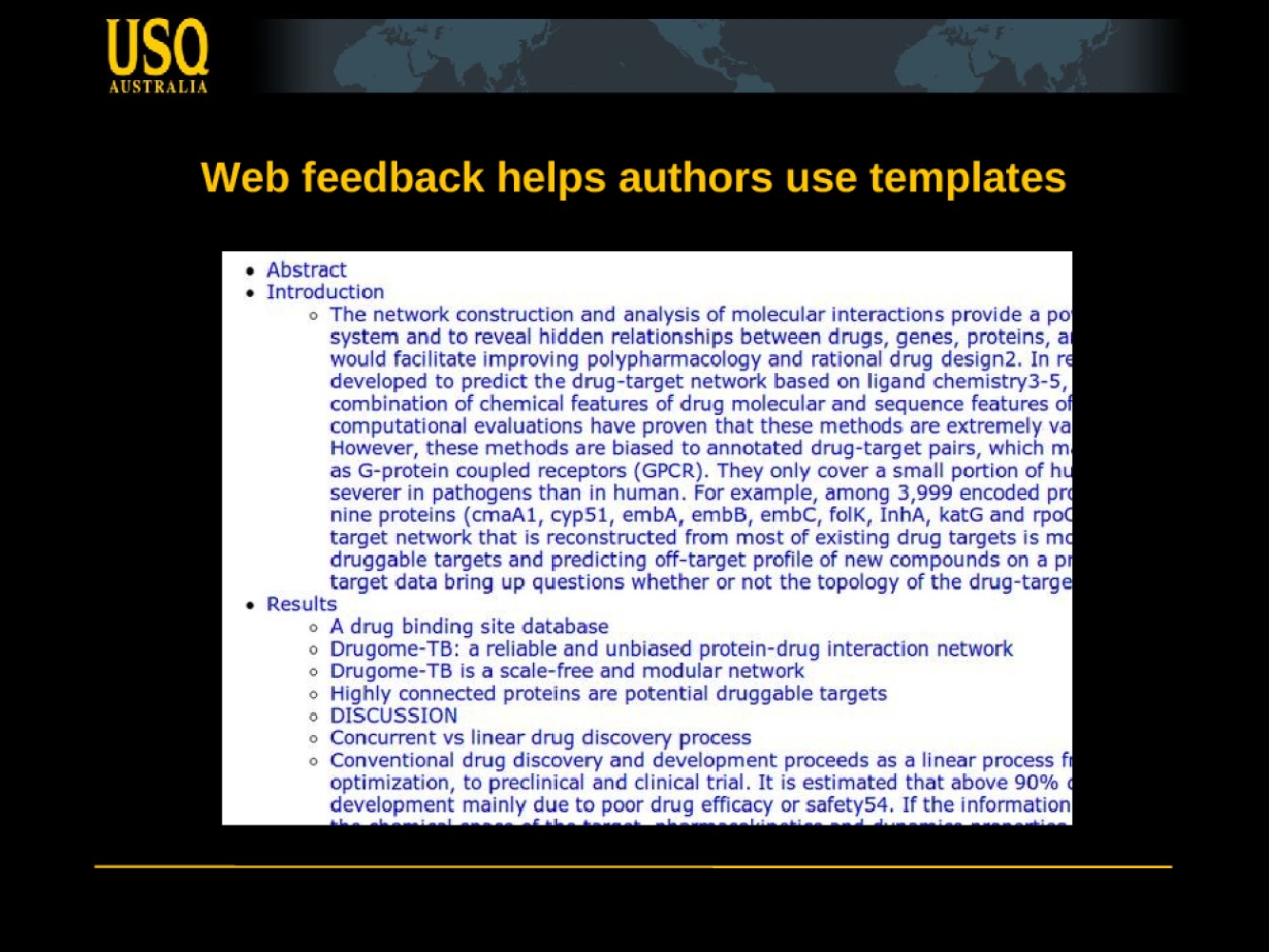 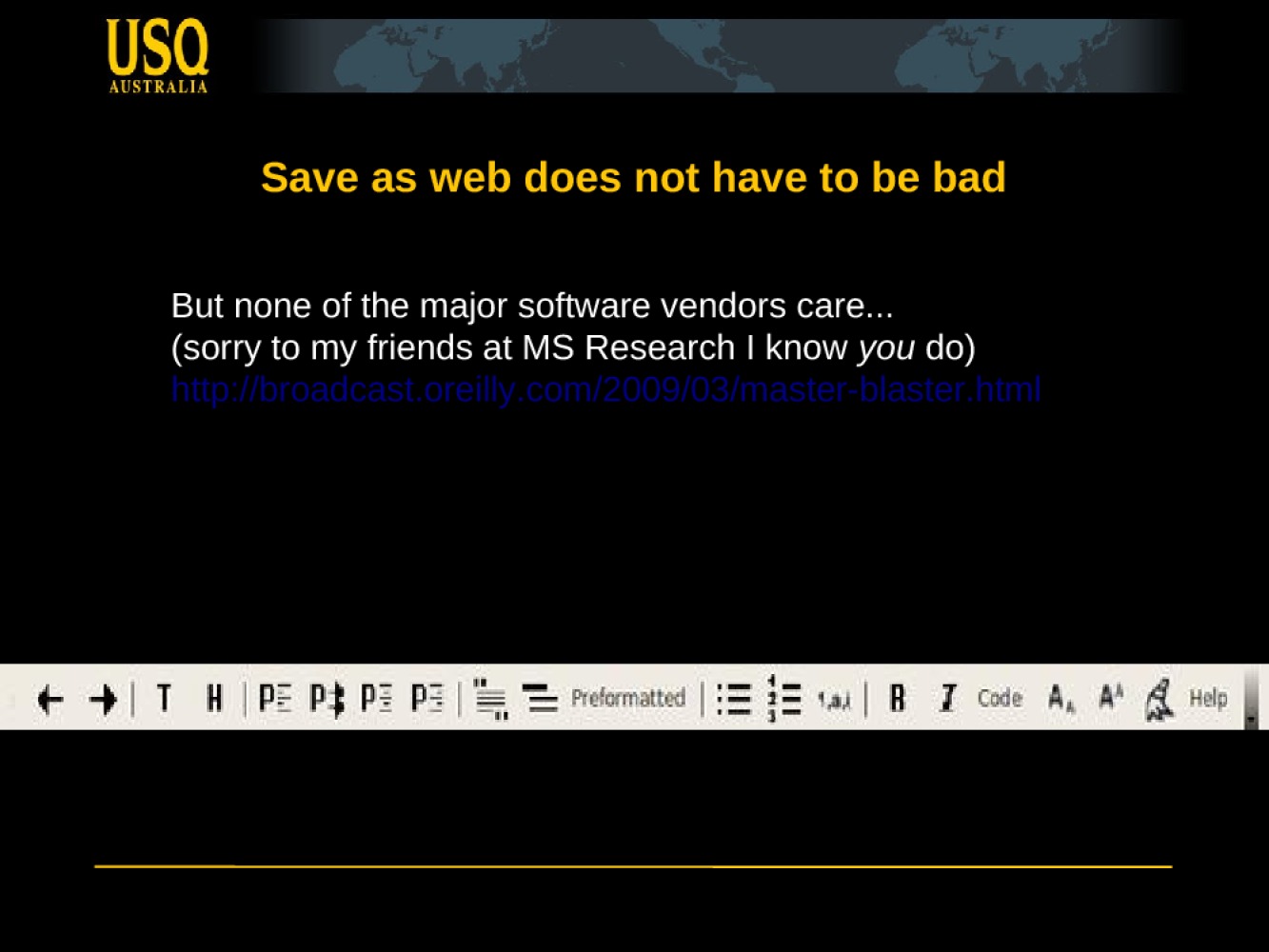 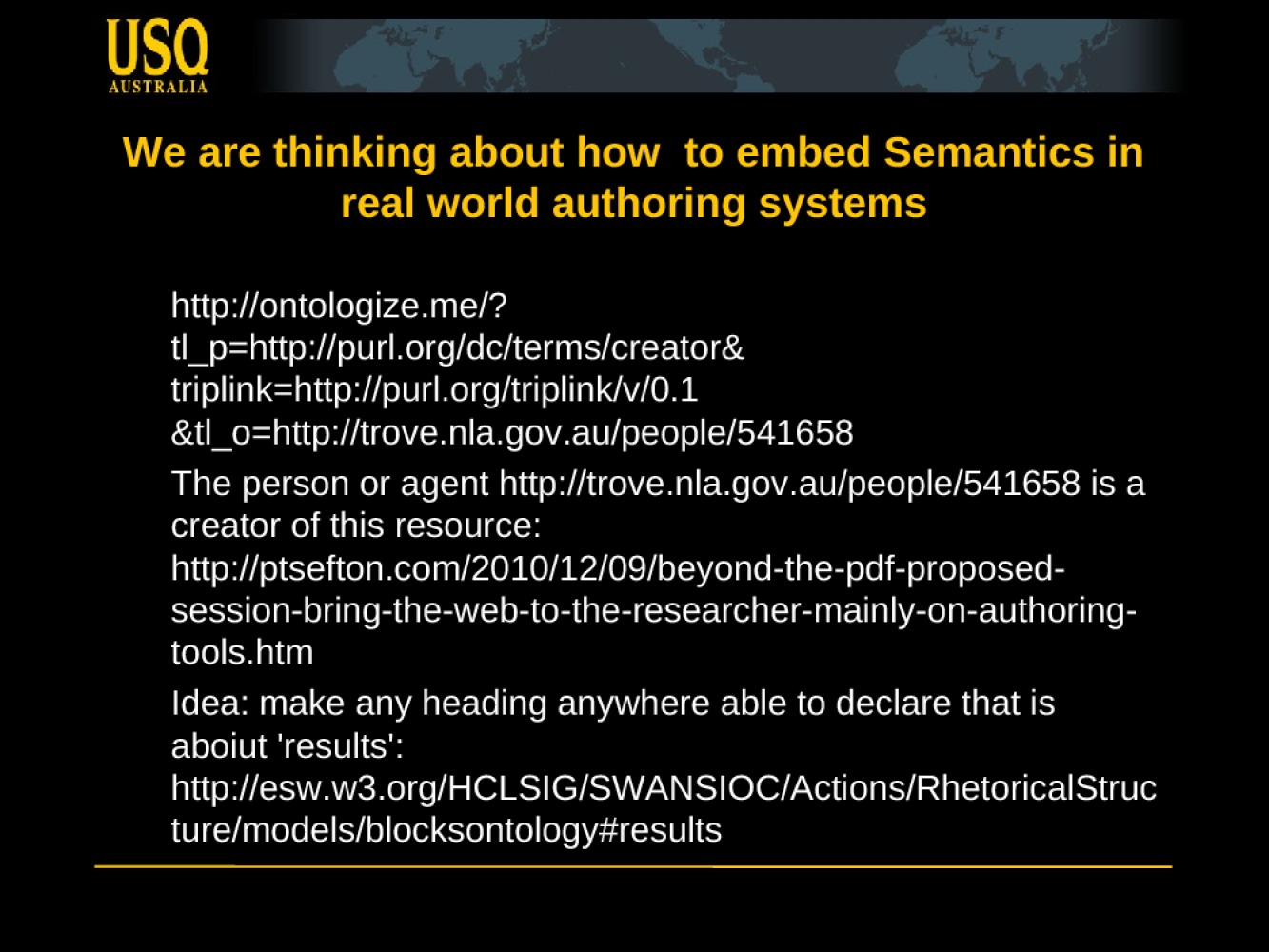 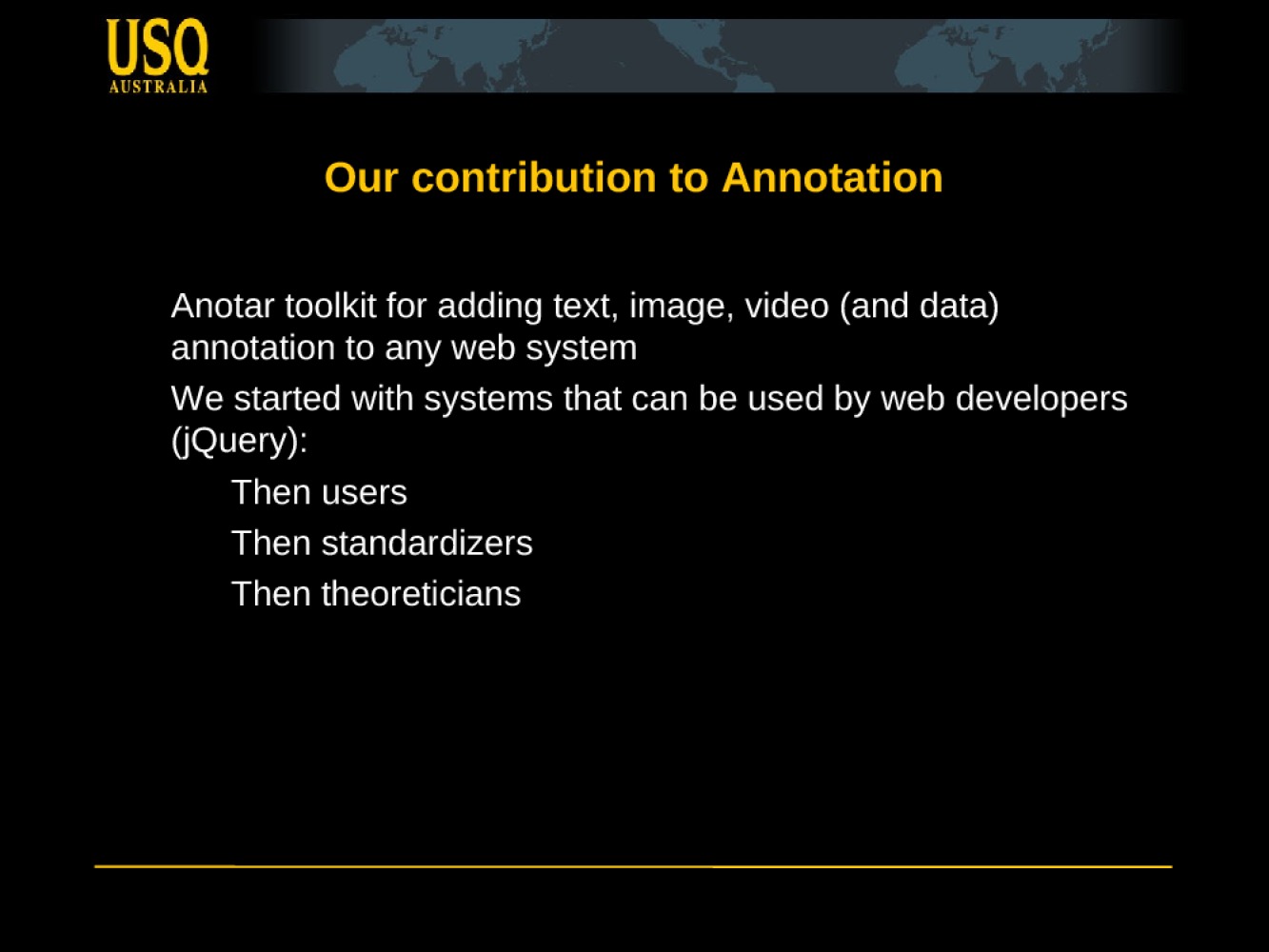 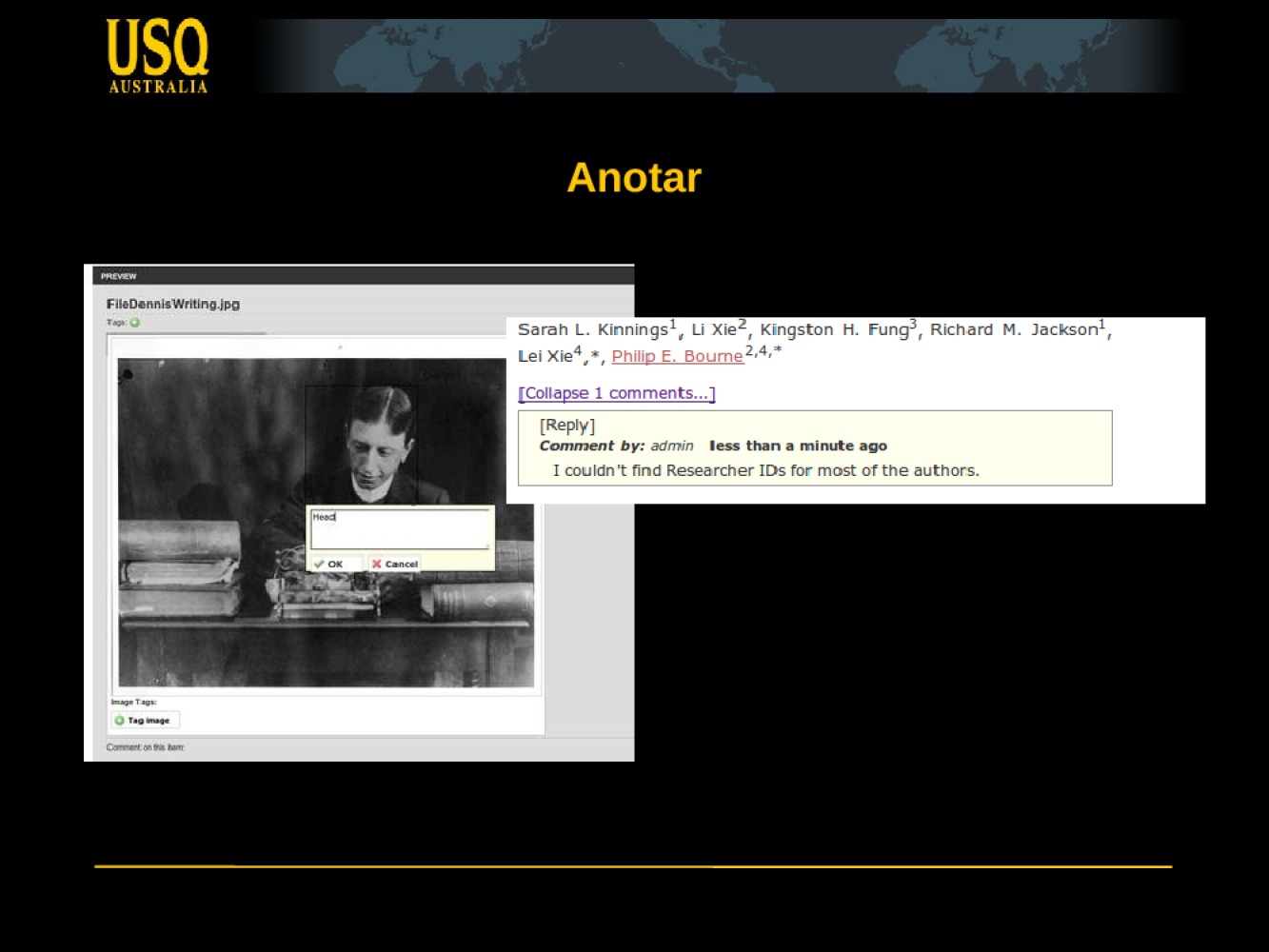 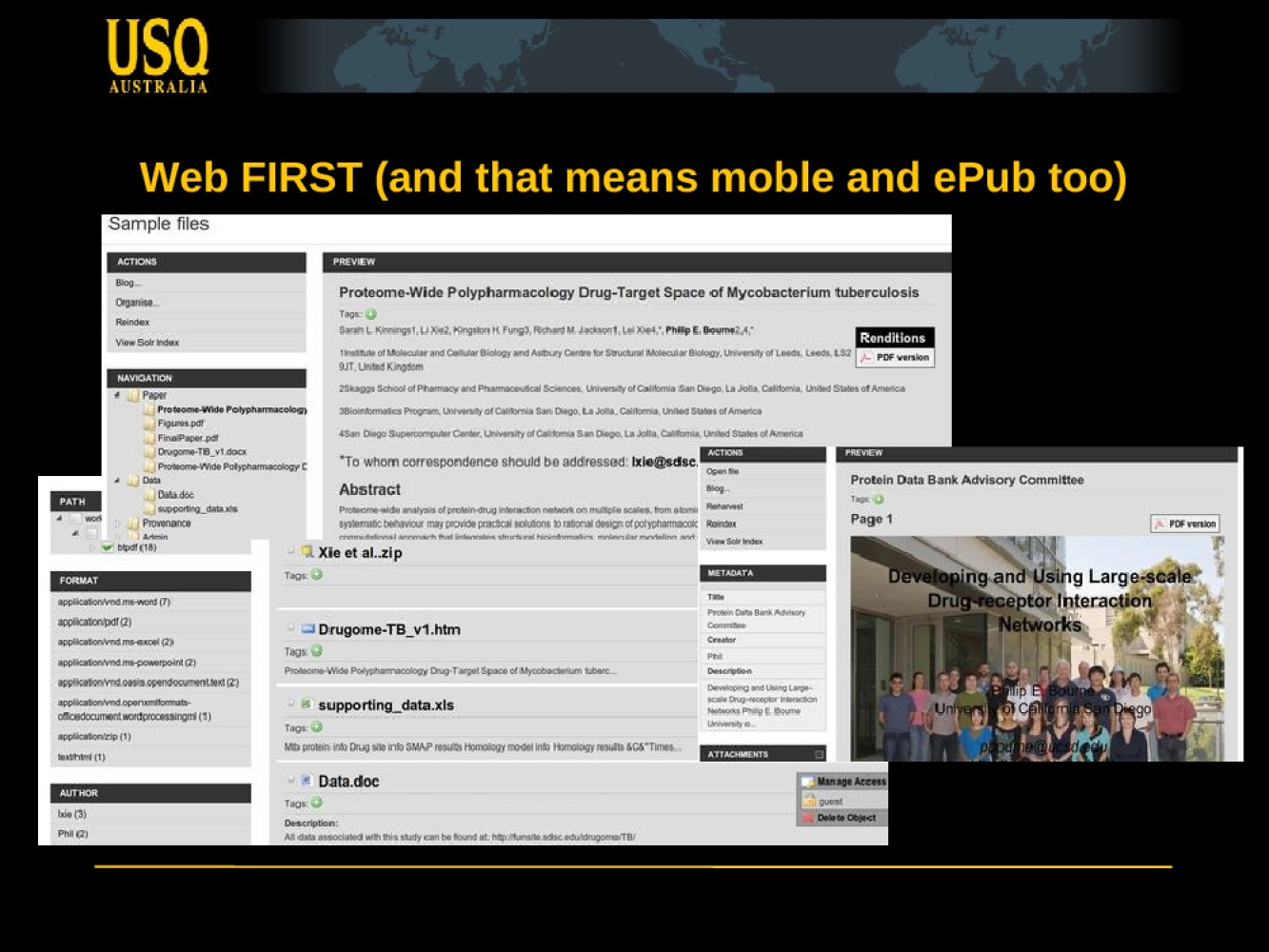 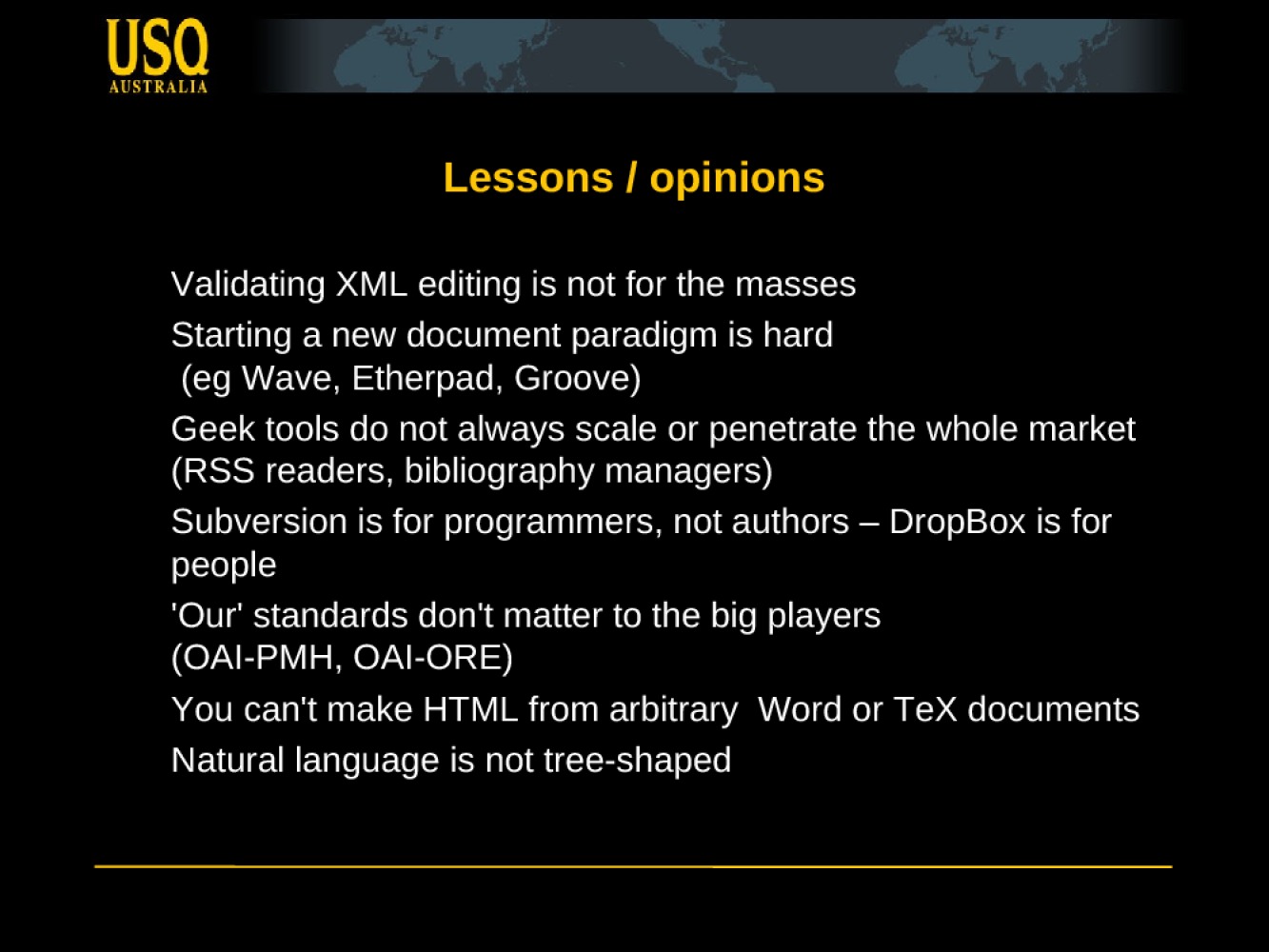 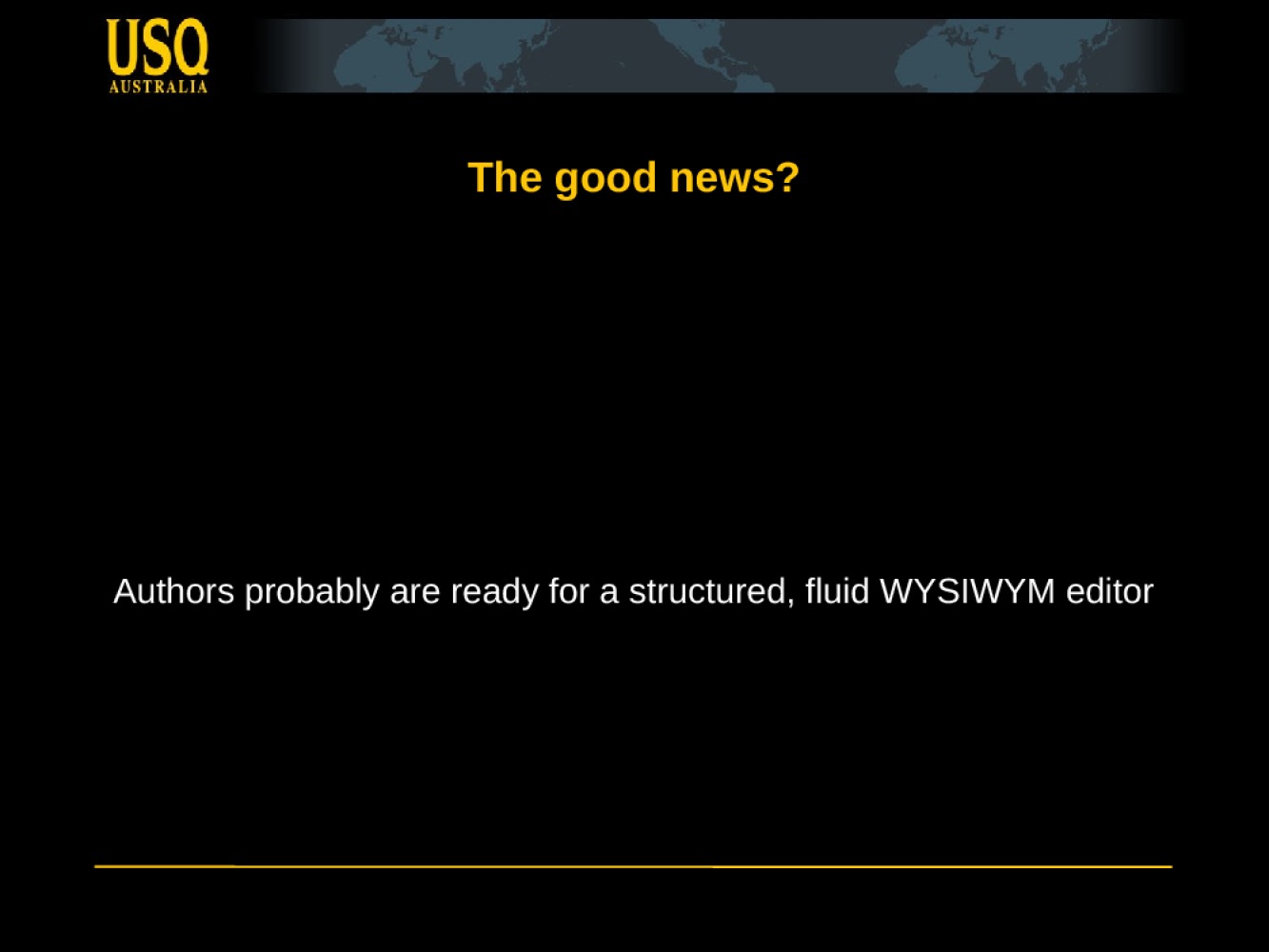 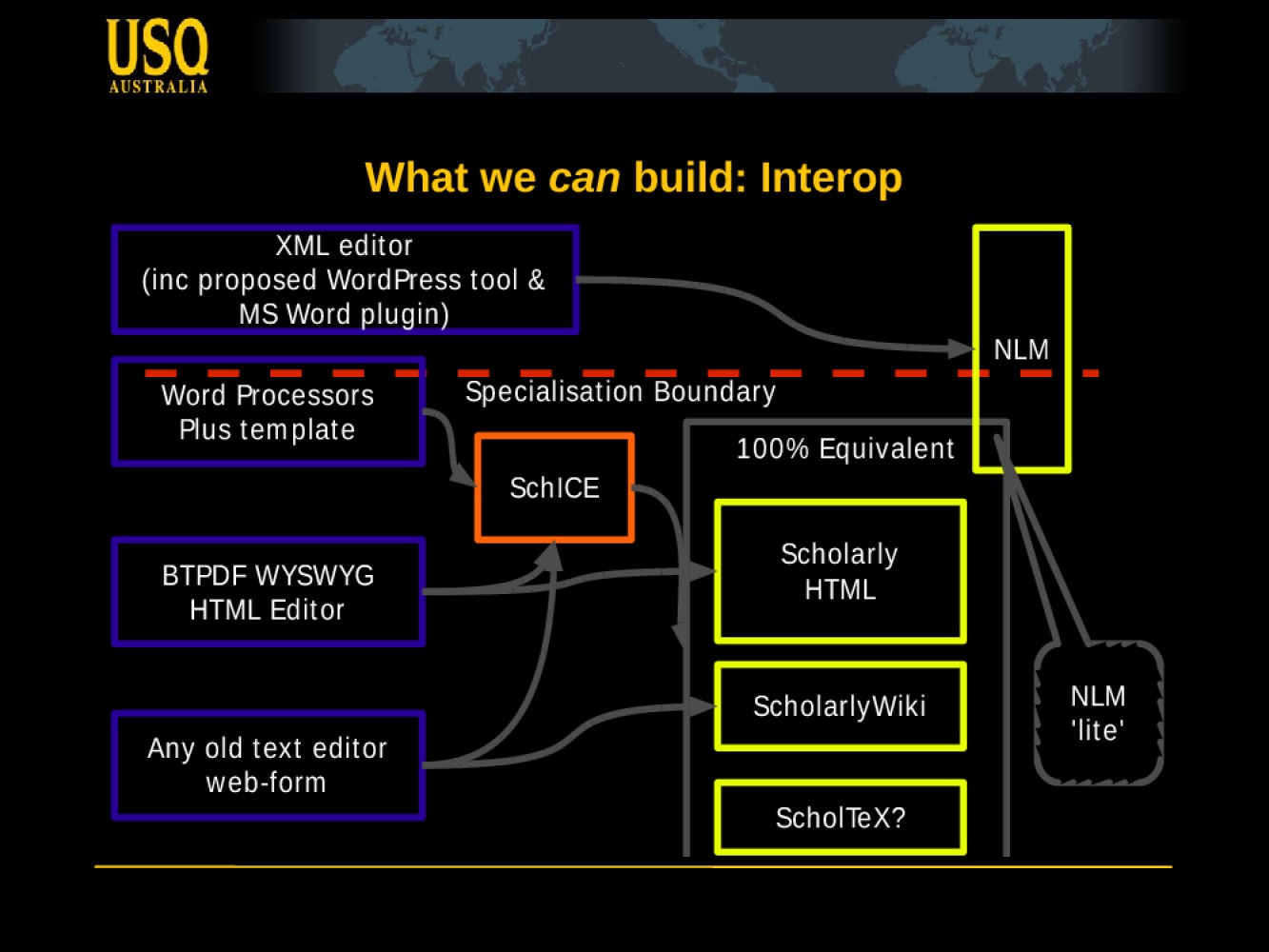 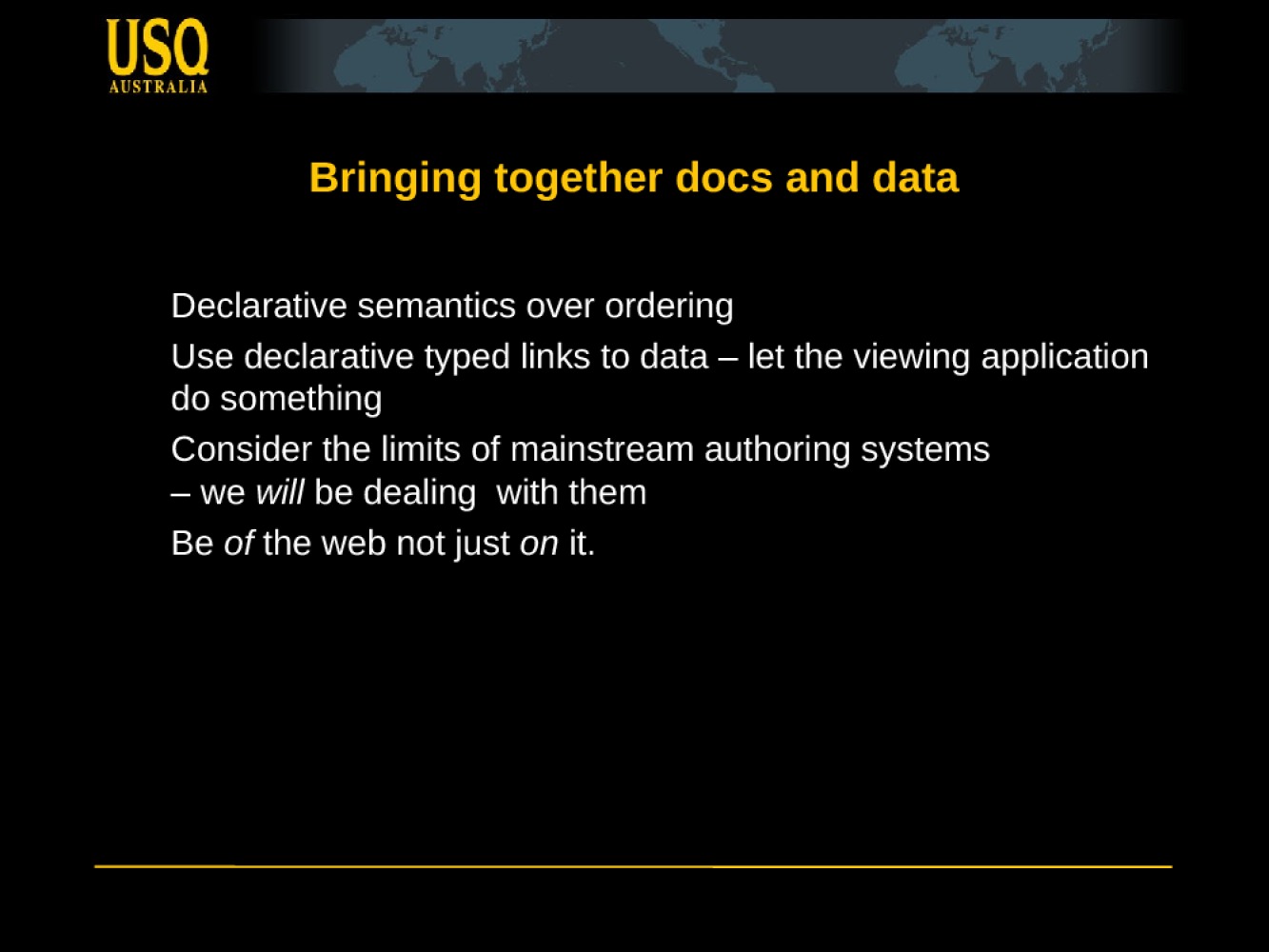 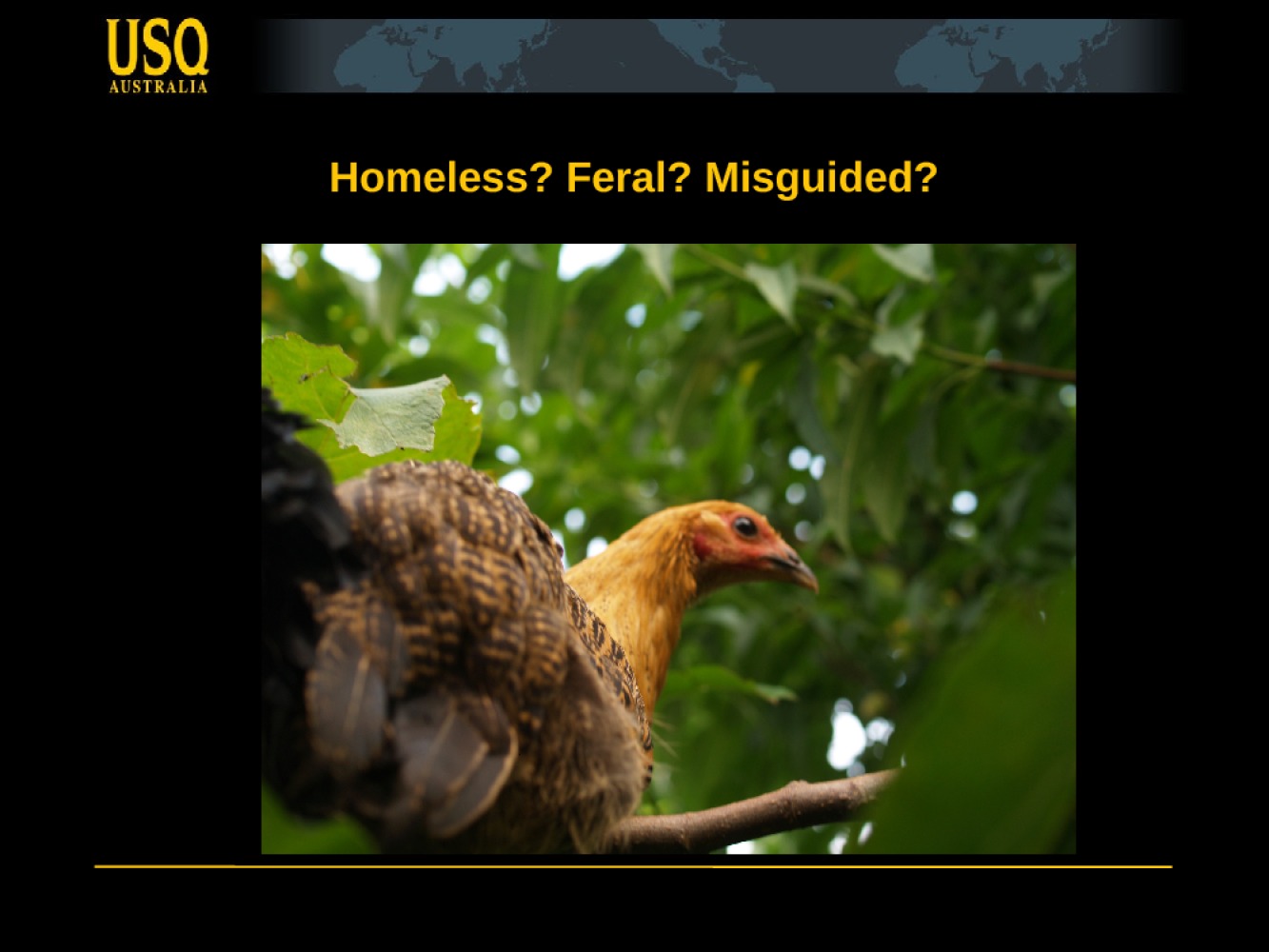 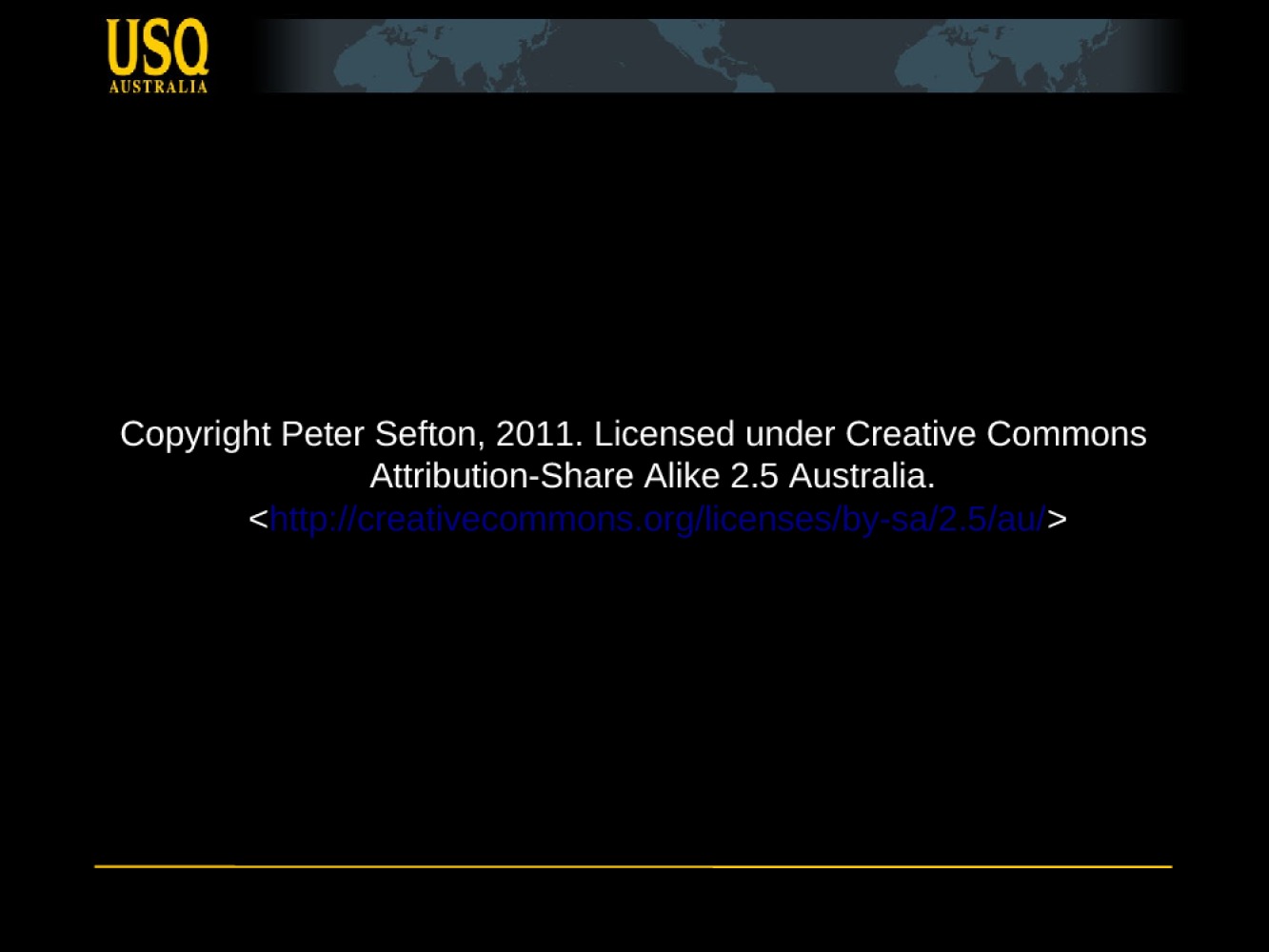