On Wednesday 5^th^ Dec I (Peter) visited the Japanese Digital Repository Federation at their invitation and expense, to talk about how our respective repository communities are organised.  I’d like to thank the DRF for this opportunity to make the brief trip to Tokyo. Caroline was invited but was unable to make it. The DRF folks have put up a summary of the meeting, in Japanese. Note that while my comments on that page are listed as “CAIRSS” I was not representing CAIRSS (the CAUL (Council of Australian University Librarians) Institutional Repository Support Service), I attended as a member of the Australian/Australasian repository community. I also attended the DRF international conference in 2009 on a similar basis, when I did happen to be associated with CAIRSS, so the organisers knew me. I did talk a fair bit about CAIRSS, in the context of other projects in Australia.

Before I went I polled the CAIRSS-list to find out if there were any questions people would like answered – more on that below.

First, a bit about me and repositories:

Shigeki SUGITA started off proceedings with a presentation about the activities of the Digital Repository Federation.

Perhaps the most striking thing from an Australasian point of view is a staffing issue; talented repository managers are required by management to rotate through a variety of library jobs meaning that there is constant turnover and a lack of opportunity to specialise. There are similar pressures at play in our libraries I guess, with a need to train new repository staff, and significant turnover but not to the same extent.

Japanese repositories are very much driven by an Open Access agenda, which is quite different from the situation in Australia where two different government measurement schemes collecting information about publications and push repositories in another direction, more on that below.

Another interesting dimension to the Japanese scene is that they have a number of consortial-repositories where a number of institutions share a repository. This is an idea that came up in Australia in the mid-to-late 00’s several times, but never got off the ground. It might be worth revisiting some time both for institutional publications repositories

I presented from an earlier version of the ‘slides’ below – I have added some notes from the discussion and clarifying material.

The Australian government made significant investments in institutional repositories via programs such as:

These projects and other investments in the repository world were via these funding streams (for which the websites have disappeared):

We talked in some detail about how these funding schemes have influenced the establishment of repositories; while the initial driver for Australian repositories was open access, the Excellence in Research for Australia (ERA) measurement exercise and its failed predecessor stalled the Open Access movement to some extent, by requiring universities to collect non-open access materials in complicated ways.

Coming out of the investments outline above, CAIRSS was established on  March 16, 2009:

The first CAUL service was funded for two years, with the approval of Department of Innovation (DIISR), with monies remaining from the successful ARROW project, supplemented by CAUL member subscriptions. 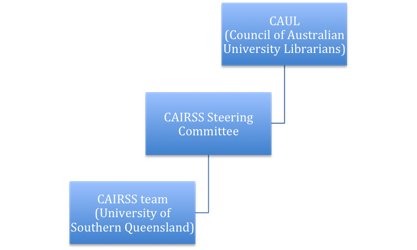 This version of the CAIRSS service covered Australian universities, and was staffed with:

The second version of CAIRSS was funded from member subscriptions and expanded to include New Zealand:

This version of CAIRSS had a reduced team in the central office at USQ.

From 2013 CAIRSS will no longer exist – it is being replaced with a new service know as CRAC.  I gather that the feeling of CAUL was that the community is now mature enough to be self-sustaining.

(will undertake some of the work carried out by CAIRSSAC and COSIAC, from 2013)

There is a new Open Access group in Australia which is not part of the CAUL/CAIRSS family.

The Australian Open Access Support Group (AOASG) was launched during Open Access Week in 2012. It is a consortium of six universities with open access policies  - QUT, ANU, Macquarie University, Newcastle University, Charles Sturt University and Victoria University. The group aims to provide support, lobbying and advocacy for open access in Australia. Membership will be extended to other research institutions and affiliates during 2013.

http://www.aoasg.org.au [NOTE the website is currently being built – may not be live yet]

The repository community is well established and members of the community run their own investigations into repository matters. These range from asking questions on the list about repository practices, to running formal surveys. An example from the broader CAUL community of which CAIRSS is a part is the IR / Open Access Funding Survey by Danny Kingsley and Vicki Picasso.

It would be interesting for CRAC to consider something similar to the DRF model  - eg at the beginning of each two year period, to meet and consider what projects could be done in the space, within Australia / NZ. Then perhaps a call could be put to institutions who could then (according to their strengths) be assigned to do that project in a collaborative model, using their own funds. I’m not sure if it would work here, given the big physical distances, but I think it's a good model in a scenario where there's limited funding.

I’m sure CRAC will consider this.
#### April event in Tasmania

An event is being organised in Tasmania in April around the following themes. Regional participating would be most welcome.

From David Flanders at ANDS:

## Questions (with my notes)

Natasha Simons at Griffith University had three questions that provided a great structure for the discussion part of the meeting. I tried to take notes (included below) as well as talk.

In January 2012 – DRF heard there were repo managers in the UK, they invited a rep from Repositories Support Project (RSP) in the UK.  Jackie Whickam came to snowy Hokkaido, where they found out that RDF and RSP carried out similar activities – eg the re-enactment of online discussions wearing masks.  After the meeting found out that there were many more things to share. Eg in the UK they carry out residential workshops. Meeting with JW was about operational things between repo manager communities in UK and JP. Wanted to do more on activities to do with individual repositories.

Most important objective of MoU is to send representatives to counterpart meeting to share more specifics. Since signed the MoU they have not done so much. First thing was to invite a rep from UK to national workshop. UK rep was asked to give a presentation about how they promote activities inside universities.

The MoU says they will sponsor trips for each other (but the Brits have not done their bit … yet :). RSP has just come to the end of its funding cycle. DRF hopes that even though there is uncertainly about funding the collaboration can continue. Funding is restricted to long term planning is difficult.

Sharing of results at June meeting, not much more than that.  Some projects with strong outreach will be well known. Out of 20 – some projects faded out without much impact.

Some projects that have done well:

3. Are they ways we can communicate better with them? Do they hold any webinars on topics that would be of interest to us? If so, how do they tell people about them? Could they tell us? I see they post to the JISC list every now and then (usually well-deserved achievement boasts). Should we have a 'guest' from DRF join our CAIRSS e-list or could they email you and then you post to our e-list?

Don’t do webinars and they do everything in Japanese so that’s a challenge. Does anyone on the CAIRSS list have good Japanese? The DRF would like to have a member on the CAIRSS/CRAC list.

Future of DRF not clear.

NO OA mandates from JP govt – rules being revised now so that theses can go through IR or must? Policy reads like must but we don’t know. May open the door for theses to publicised thru network. If this is realised there will be more possibilities – need to think about metadata standards and talking to national library. )

Once again, thanks to the DRF for having me – I am following up with CAUL on how we might be able to collaborate further. Now that we are in the CRAC era, Caroline’s suggestion of having a ‘call for projects’ that then get implemented at the member institutions sounds like it might be a way forward, and an ongoing relationship with the DRF (and the UK RSP) would be helpful, as they’ve been down this road before.