I have been working with others on ways to embed simple PowerPoint-like overhead slide presentations in longer documents for years. I like to combine an essay or blog post with the presentation in one source document, to give some context to the slides.

I also find it much easier to develop some kinds of presentations if I write them out essay-style at the same time I am developing the slides.

BTW: Did you know that the latest versions of PowerPoint don’t even have a Save As HTML option! Sure you can link to a presentation in Microsoft’s cloud, just like you can with Google, but do you trust that to be around forever?

This week, I’ve put together a demo of how to merge presentation and explanation using declarative Scholarly HTML. The resulting presentations are not as slick as PowerPoint, don’t have transitions or slide-building point by point, but they’re light and portable. But apart from the slides this **declarative Scholarly HTML technique** I’m talking about is a really important part of how we publish, present and preserve scholarship.
## The declarative Slide format

First, lets look at the HTML that drives this, then I’ll come back to how you author it, and how you get it to display, and why this matters.

In an HTML document mark up any block level (container) element you’d like treated as a slide to say “This is a slide”, by referring to The Bibliographic Ontology.

*RDFa 1.1 would also work, I don’t care which format wins even though I know there are good arguments why one should care.

This is like the approach used in the venerable Slidy, and several other HTML based slide show systems, although most of them use a microformat convention such as \
rather than one of the standard mechanisms for HTML semantics, and as far as I know none are designed to mix slides with other content.
##### What’s wrong with \
?

* Feel free to start a debate in the comments about whether it says that really says this is a slide or is about a slide. You can refer to this, which will make everything much clearer.

My aim is to produce documents that are independent of the systems used to store, serve and process them, hence the declarative approach. You can drop one of these documents into any CMS or processing tool and it will behave as normal HTML. But a system which is aware of the semantics can do something special with the content. To demonstrate this I have written a very small WordPress plugin which you should be able to see in action here in this post, and in my previous post, [on collaboration around research data](http://ptsefton.com/2012/09/12/virtual-infrastructure-and-research-support-fostering-collaboration-across-institutions.htm).
##### Slidyfy Wordpress plugin; initial, crude modus operandi
## Authoring Workflow Separating content from delivery

How would someone use this? Well, they’d reach for their Scholarly HTML editing environment. This might be a text editor, where they’d make HTML documents by hand, or they might work in Word or Open Office Writer, or PowerPoint or a combination of both (more on that later) via WordDown. Or, if they were prepared to do a little work coding they could use something like Markdown, which is one of the family of Wiki-like markup languages. Asciidoc is another. Or, this could be done in an online content management system like WordPress or SharePoint or something. None of these are really that convenient for many users, but then strangely there is no really convenient way to make good HTML.

The important part is to separate content from the delivery mechanism.

Right now, if you want to make a presentation for the web, it’s pretty hard to beat Pandoc. It takes Markdown format or HTML and makes slideshows. This is not quite what I want in my use case, but it’s on the right track. Pandoc automates taking plain-old content and making it into a slideshow using your choice of HTML-based slideshow systems. Most of these systems require you to author not just a specially formatted HTML document but to include one or more scripts and CSS stylesheets, and Pandoc takes all the hard work out of that. You just can just give it either Markdown or HTML with headings and you’re away.

But, the result is still useful only for stand-alone documents for people who are prepared to use command line tools and have access to a web server, or run the slides from their local machine. It would be next to impossible to post the result as a WordPress post for example. And it doesn’t allow mixing free-form document content with embedded slides.

##### The Pandoc approach – full marks for separation of content from presentation\* 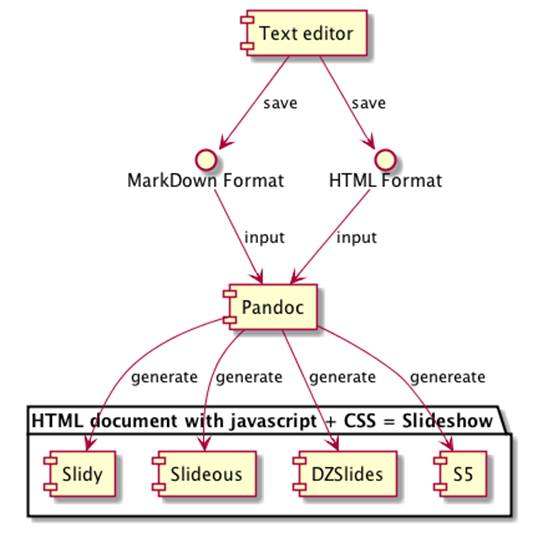 As far as I know, though Pandoc and the Markdown format it supports don’t recognise embedded semantics via RDFa 1.1 or Microdata. That’s something to look into, and I’ll be exploring that in work we’re doing at the University of Western Sydney on embedding references to data in publications, because we want to be able to refer to data sets and code etc in research articles and README files, and a text-based markup language may well be ideal for authoring those.

Anyway, Pandoc’s nice but it’s not what we’re after here, which is something that runs in the content management system, or at time of viewing. 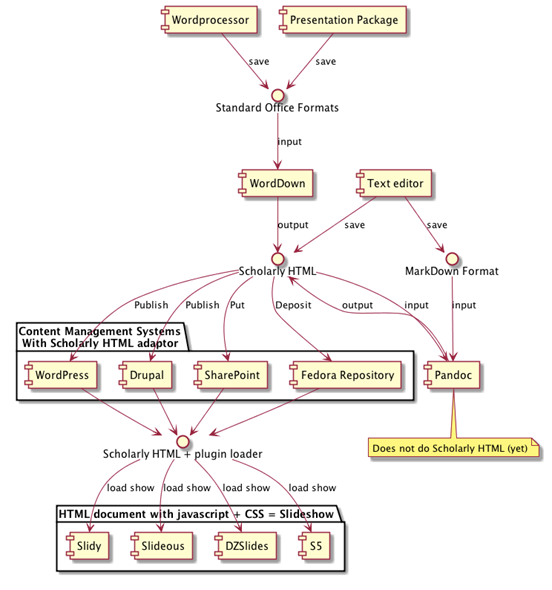 This is not just about one person’s hopefully harmless fetish for mixing up blog posts with slides; there are lots of things that go on the scholarly web where embedding semantics is important.

One example I have looked at before is chemistry – to embed a visualisation of a molecule you don’t want to have to hand-code the code to load, say, the JMOL molecule viewer applet into a page, and leave it on the web – JMOL will get updated, and may be obsoleted, it would be better to try to use a more future-proof declarative markup.

To illustrate this see a previous post of mine with a plugin to show a 3D molecule. When I started writing this something had broken in that plugin caused (I think) by a new version of  the jQuery library, so the page just showed a link to a CML file instead of the molecule viewer. This is the whole point of using declarative markup. The pretty part broke but the science didn’t.

Another example which I don’t think anyone has yet done in HTML + Semantic markup would be to format a research article into its parts. Instead of slides, you’d be marking up Method, Abstract, and Results et al.

##### Reasons this kind of technique is important

This allows us to:

*Even if we don’t believe in it

If this kind of cheap web stunt appeals, then you can get it from the UWS eResearch Google Code repository. You’d need to check this out into your WordPress plugins directory, so at this stage only for those of you who know what that means.