Today I am at the National Library, at the “Names Round Table”. I'm part of the ARDCPIPAG, which stands for “Australian Research Data Commons Party Identifier Advisory Group”. We're advising a team at the library who are building party-identifier services for researchers and research institutions in Australia.

At my work, at ADFI we're working on developing specifications for Metadata stores for ANDS. The first cab off the rank is an application architecture developed with The University of Newcastle and Swinburne University. I posted about this earlier this year. ANDS agreed that it would be a good idea to take a linked data approach to the design of the application. Linked Data is a non-threatening way of talking about the The Semantic Web, which is definitely coming real soon now. No, really, 2010 will be the year, or at the very outside 2012.

1. Use URIs as names for things

2. Use HTTP URIs so that people can look up those names.

3. When someone looks up a URI, provide useful information, using the standards (RDF, SPARQL)

4. Include links to other URIs. so that they can discover more things.

Simple.  In fact, though, a surprising amount of data isn't linked in 2006, because of problems with one or more of the steps.  This article discusses solutions to these problems, details of implementation, and factors affecting choices about how you publish your data.

Our metadata stores work is covered in blog posts here.

My presentation today focussed on the name-authority part of the architecture and looked at the process of establishing name-identities at an institutional level before joining in a broader federation. I asked the audience, what is the name we should use for this class of service? (We're still looking for a name for the metadata-stores app as well, something better than “The Fascinator, Research Metadata Store Edition, Pro” or the current working title of “Ingect”. 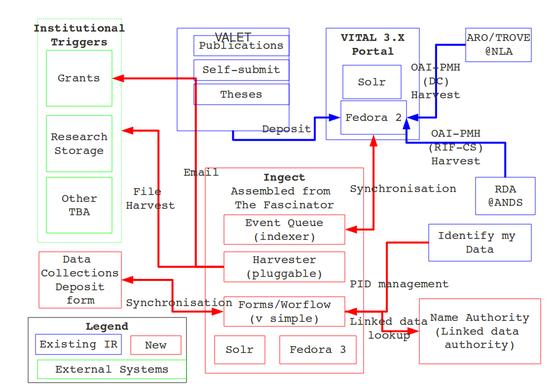 What does a Linked Data Approach mean for a metadata stores project?

In our forthcoming collaboration with the UoX we wanted to make sure that when we named the things in the institution with the role of 'research' or 'owner' of data we used URIs. In ANDS speak, these things are 'parties'. Some of the are people, some are institutions, organisations, or organisational units.

Goal: Establish URIs for person-parties at UoX before we start

So, a simple matter of:

We considered these options.

Build a name-authority server inspired by and informed by the NicNames work.

This new module, which is called, um … will:

(And this bit is not ANDS funded)

We want to make it possible to encode and decode web-semantics in a URI. Eg:

I can use this to assert that “ptsefton” is the author of this resource.

Would ANDS and/or the NLA consider supporting services like this?

Oh, and nobody at the ARDCPIP round table had an answer for me about what we call this class of name-authority linked-data-endpoint-factory application.