Here's another post about the ANDS metadata store work I've been doing. I was at the university of Newcastle last week working with Vicki Picasso and Dave Huthnance, with calls to Teula Morgan at Swinburne. Together we fleshed-out a model for how Newcastle might run a data-registry alongside their VITAL repository.

I want to use this blog post to expand on the last blog post and refine the details of what will become an ANDS project plan for someone to develop this stuff. I'm going to talk about the diagram from the last post, in particular the application which has become known as “The Red Box”. 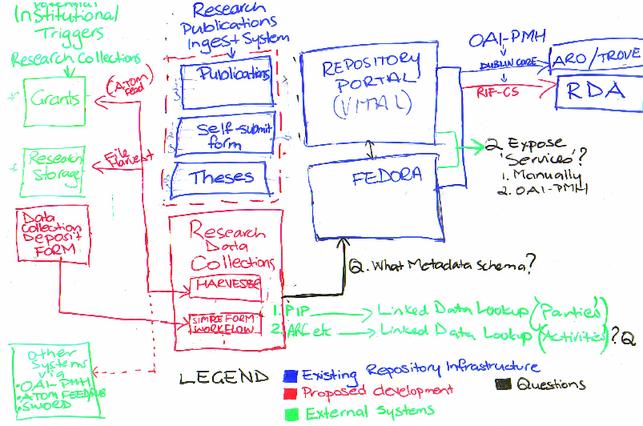 The main requirements for this system, as collected from the stakeholders are that it:

Caroline Drury the CAIRSS/ANDS liaison person pointed out that we should discuss how these requirements go beyond encouraging people to register data via the ANDS 'register my data' service for Research Data Australia. The big things are:

The deliverable for the work we're doing at USQ for ANDS is an ANDS project plan. That makes sense, as it makes starting up the next phase of work straightforward. But to put forward a complete plan, we need to make some assumptions about the design, mainly in what technologies we would use. So here's a proposed broad-brush architecture for a metadata stores solution work with VITAL. Remember this is only a proposal an the reason it's up on this blog is so you can comment on it.

The large-scale assumptions are:

I'll take a brief look at some of the components in turn.

The Fascinator already has the basis for a batch-change tool. The Fascinator, whether it is sitting on top of Fedora or our simple file back-end has indexer component which can either watch a queue for changes in a repository or do a complete re-index.

This indexer has an extensible set of rules which are small scripts that can be fired off to deal with various kinds of content. In our desktop work we use this for things like generating web-ready versions of video content and HTML versions of documents, but it could also be used to transform datastreams in the repository to make bulk changes.

Here's an example of how it might be used. I talked previously about setting up a system with the NLA or locally using NicNames to assign unique IDs to researchers before we start the major part of this project. Once we had a set of name identities, they could be put back into the repository by writing an 'indexing' rule that for each document does a look up to the name authority system and puts it back into the MARCXML datastream in an appropriate field. Then you tell the system to re-index.

For a batch edit, you'd back everything up, then set this up and run it on a copy of the repository and swap in the new data and test thoroughly with VITAL, before either running the process on the live repository or swapping in a new Fedora database underneath.

One of the key deliverables for this project is to get data flowing to Research Data Australia. Part of the project scope will be to make sure that we have fully-functional OAI-PMH feeds, complete with support for deletions, working from both VITAL's copy of Fedora and from the RedBox itself to meet the requirement that the system is able to run in “headless” mode. Xiaobin Shen from ANDS in Melbourne has been working with OAI-PMH providers, so we don't expect this part to be hard., just a matter of careful selection, configuration and testing.

One of the major tasks is to create customisations for VITAL to display metadata records about data and make sure that the result fits in to the rest of the VITAL repository portal.

While we're not proposing to use the Squire forms interface sponsored by ARROW directly, the code we will be using is based on and informed by the same VALET model. This system consists of:

The University of Newcastle has a research storage facility (a SAN) and policies are under development which will likely see lots of RDA-ready data made available on the facility. One of the features of the RedBox application will be to he able to harvest metadata about such files; at the very least, file-paths, sizes and dates, and any other metadata that can be automatically extracted. For data that's on the storage facility the idea is that researchers can add it to the metadata store by finding the data files themselves and clicking “Describe this data” to fill out a form.

The Fascinator has a number of features in this area such as the ability to generate thumbnail versions of files and web-ready renditions of various formats, which is of peripheral interest to the metadata stores activity.

The harvester system is highly configurable, so it could be set up to index, or watch other kinds of storage service; one that Newcastle require is the ability to harvest an email account with messages from the grants database about grant completions; which are events that should trigger a metadata librarian to chase-up data from researchers.

There will be a detailed risk assessment for ANDS, but here are some notes about the main risks:

1 I'm not convinced that using the ANDS handle infrastructure is a good idea. Firstly, ANDS is only funded for a short time and while ANDS staff express their aspirations for keeping things going there are no guarantees, secondly, data has to have URL pointing to where it is stored, and that has to be maintained as well, with redirects and so when things change. In a lot of use-cases I think that using Handles just increases complexity, cost and risk.