Suggestions for collaboration based on hard-won experience

On Tuesday last week I took to the stage at the University of the Sunshine Coast Innovation Centre for the CAIRSS community day, I talked about seven things we're doing wrong in the world of repositories. Negative? Maybe, but there's no point in spending all our time patting ourselves on the back; I thought I might spark some discussion, and it seemed to work. My talk was in the session on software, so most of what I had to say was to do with technology, but some of it was policy and governance. That presentation will be posted on the CAIRSS site soon with commentary on the CAIRSS blog.

By Friday I was in Tokyo, at the Tokyo Institute of Technology in a building rejoicing in the name “Tokyo Tech Front”, another nice new venue. This time I was presenting a similar but more positive and less technically oriented list that I put together with Kate Watson, my CAIRSS colleague. The theme of the conference was Open Access now and in the future, from the global and Asia-Pacific points of view so we put together a summary of where we think Australian university Institutional Repositories are up to from an on-the-ground perspective, with some suggestions for future collaboration based on our own experience of four years or so of IR development in Australia.

There was a lot of emphasis on the Open Access movement at this conference, along with discussion of how to recruit repository deposits. I think the first lot of Australian IRs were mostly motivated by Open Access, but Katie and I note that while this is still a concern, the biggest driver for an Australian university to have a repository is the good old ERA: The Excellence in Research for Australia Initiative. Open Access might get you cited, extend the reach of your research and chip away at rationalising the scholarly communications process, but the ERA will get government cash. I think that the ERA is having a galvanising effect on populating repositories in Australia, at least with metadata and 'dark' publisher's versions of articles, maybe at the cost of openness, for now.

I won't try to summarise everything on the program, but Alicia López Medina  of COAR/UNED had a strong thread about OA running through her talk, as did Salvatore Mele from CERN, which is unsurprising given that those physicists are very OA, using ArXiv as they do. Salvatore also talked about SCOAP^^3^^. As the site says a “A consortium facilitates Open Access publishing in High Energy Physics by re-directing subscription money.” (Alicia pointed out that the percentage of literature covered by SCOAP3 is very small so we should not relax our efforts to recruit deposits just yet).

On the recruitment side, David Shulenburger (Association of Public and Land-grant Universities) talked a lot about repository deposit mandates. The chair, Syun Tutiya asked me to comment on the state of repository mandates in Australia, and I said that I think that the whole open access thing has gone off the boil a bit in Australia, probably because of the ERA, especially since some of the requirements for the ERA are the opposite of OA, people have been figuring out how to limit, rather than promote access to some content. But I couldn't help noting that we have mandatory income tax in Australia, and some people go to great lengths to avoid it, (that's why I think we need to re-brand it as 'sharing' which we are all taught from an early age is a good thing, an idea that resonates with the success of services like slideshare in academia).

This was my first time presenting with a translator, so I was glad that the presentation was relatively simple; I took it one point at a time and paused for the Japanese version. The talk following mine, by Hideki Uchijima (Kanazawa University) summarised the state of play in Japan; I hope the presentation turns up online, as I have lost my printed proceedings. From memory about a quarter of circa 800 (!) universities have repositories, although that sounds better if you look at unis that award PhDs; and while there are metadata standards to which most repositories adhere, I gather that the Japanese experience of harvesting multiple repositories is like ours in Australia 'some normalisation required' via 'crosswalks'.

I was interested to see Susan Gibbons presenting on the outcome of University of Rochester's approach of Studying Users to Design a Better Repository, resulting in their new IR+ software, written by Nathan Sarr, which Tim McCallum is installing in our CAIRSS sandbox so Australian IR people can kick the tyres.

Mikiko Tanifuji of the National Institute for Materials Science pointed out to me in a break that the situation in Japan is like Australia in that we have CAIRSS which is for universities, and they have the Digital Repository Federation which is likewise focussed, and wouldn't it be nice if we could be a bit more inclusive. Sounds like a good idea to me. Anybody care to fund it?

The slides follow below, thanks to a new feature in The Fascinator that allows blog posts (and soon repository deposits) to be composed of more than one digital item. 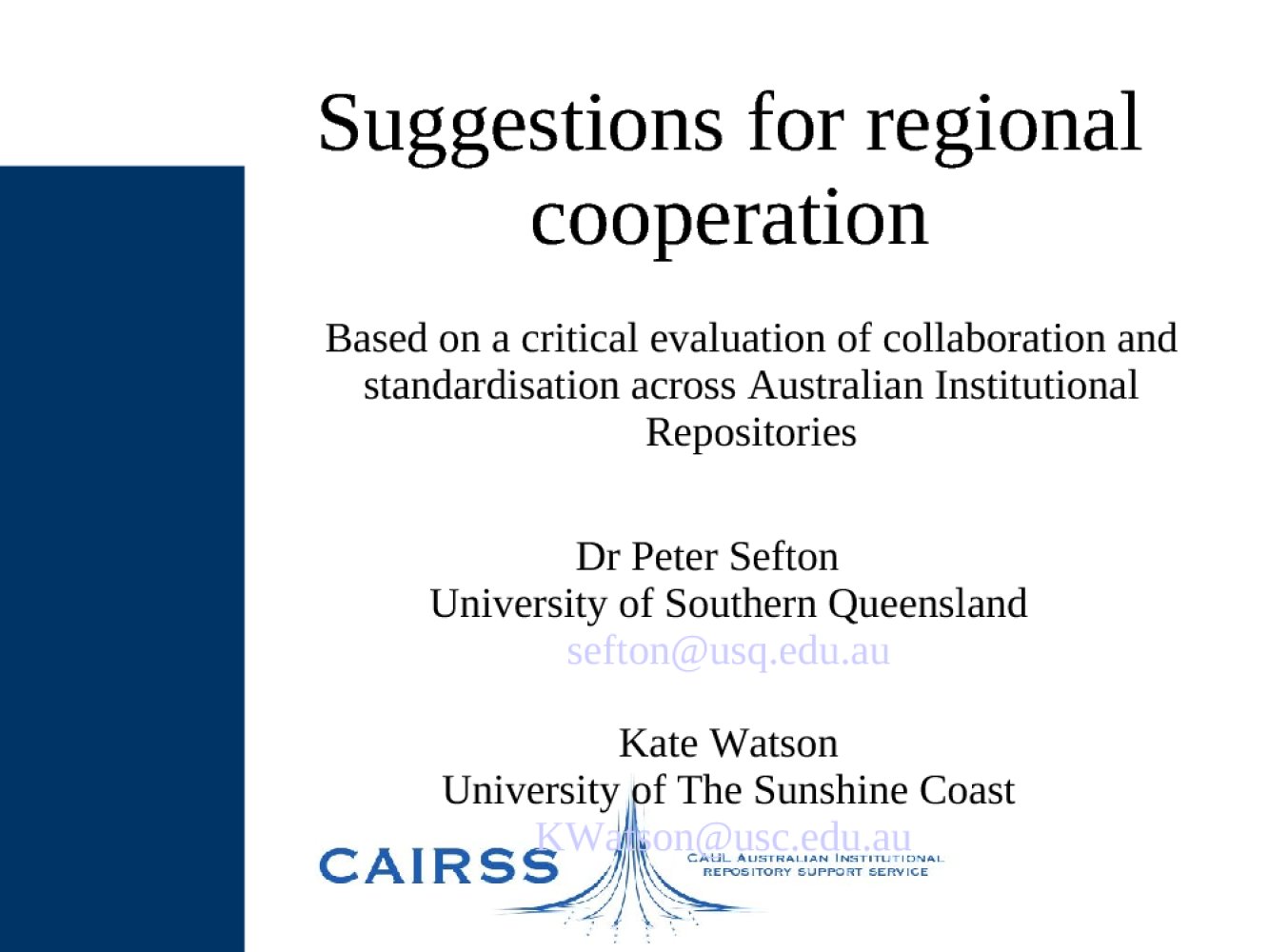 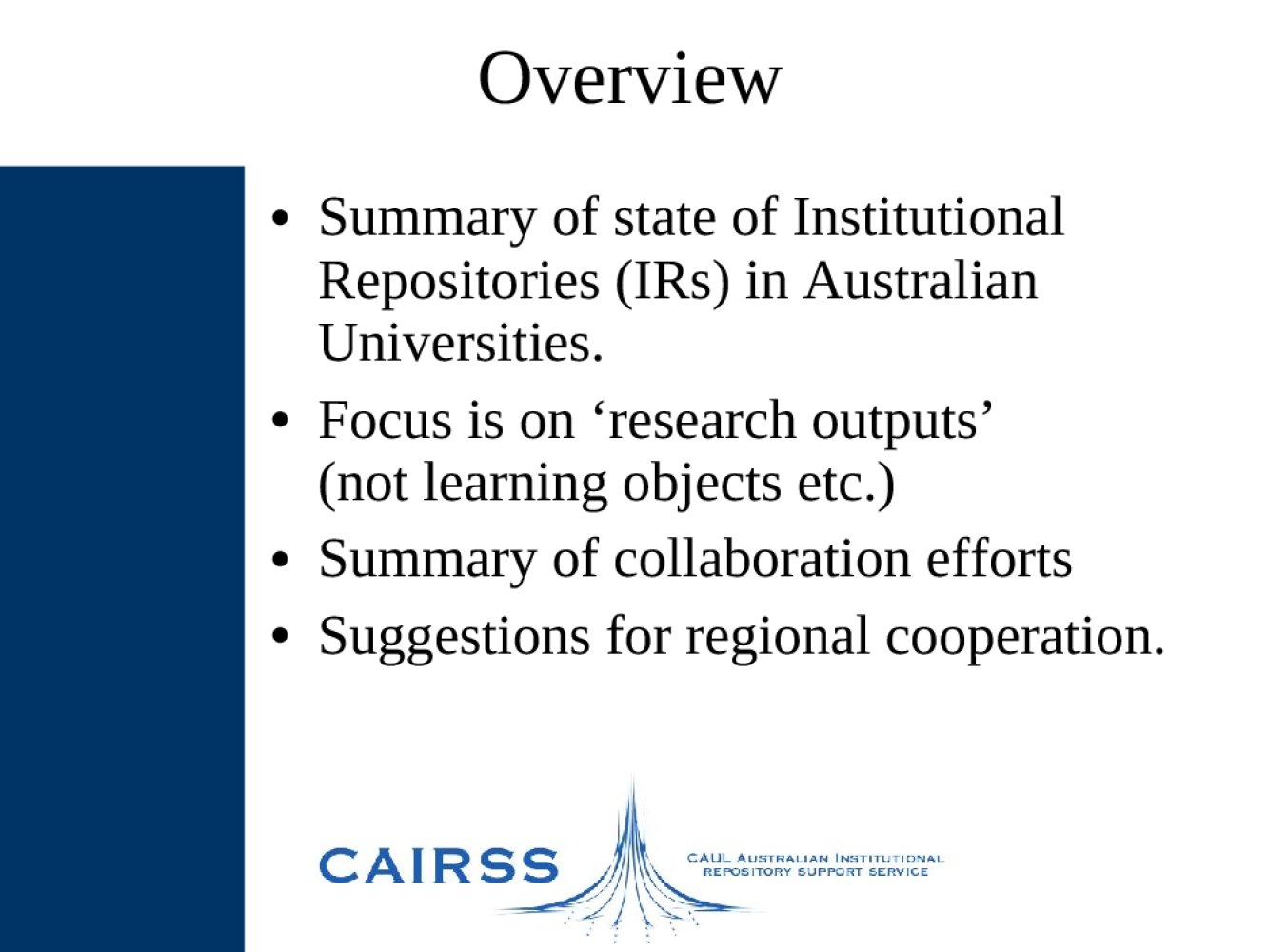 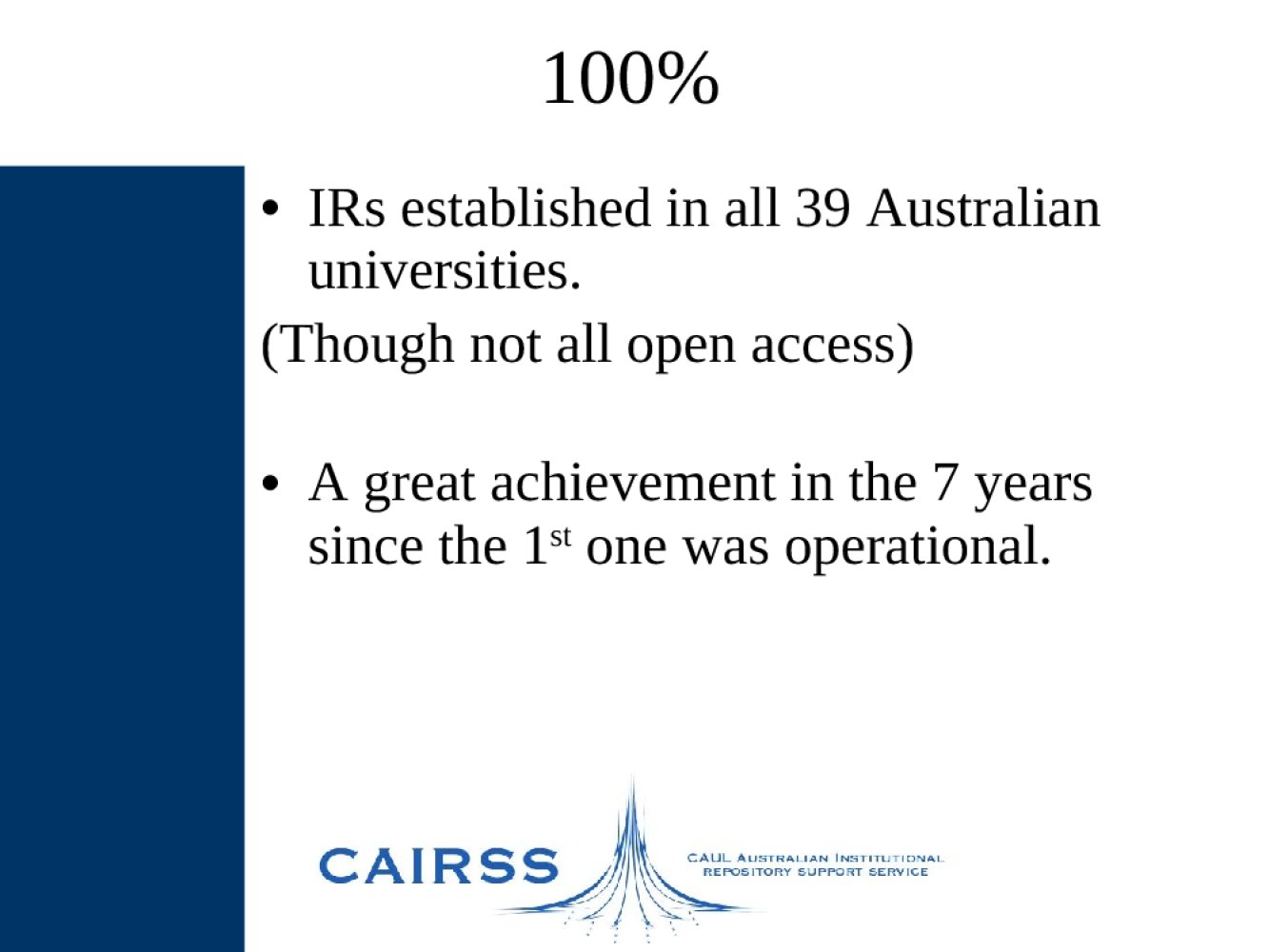 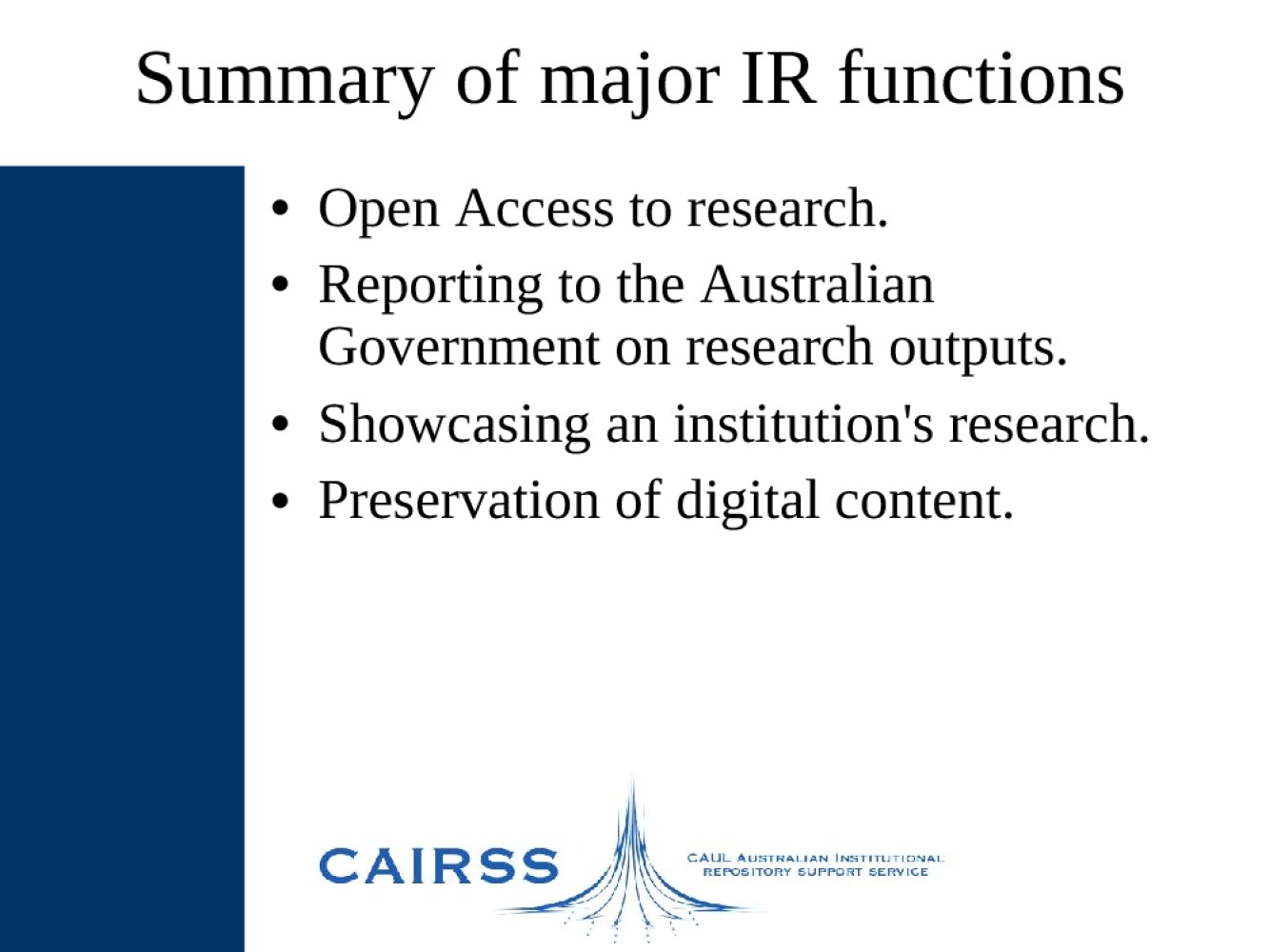 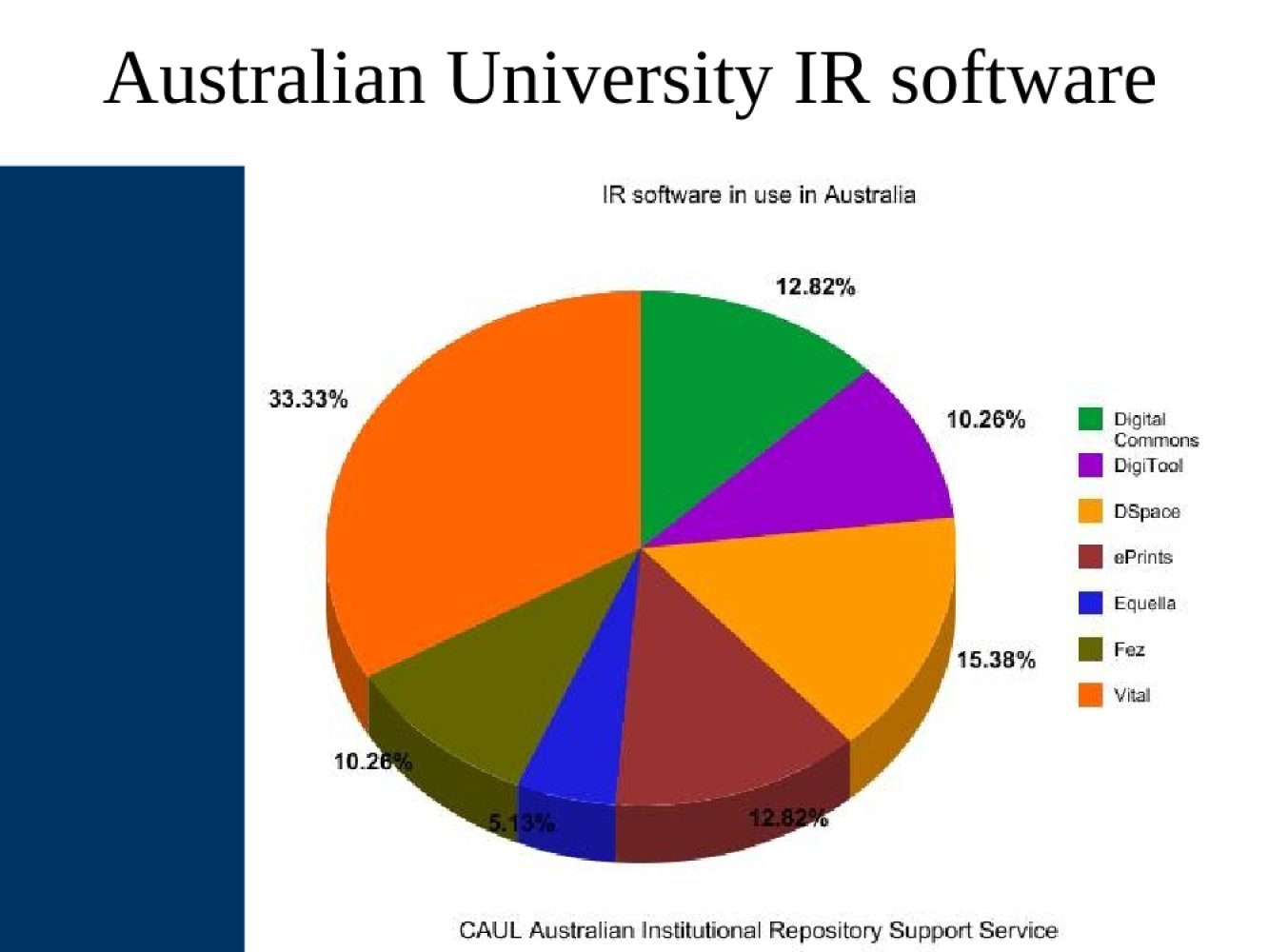 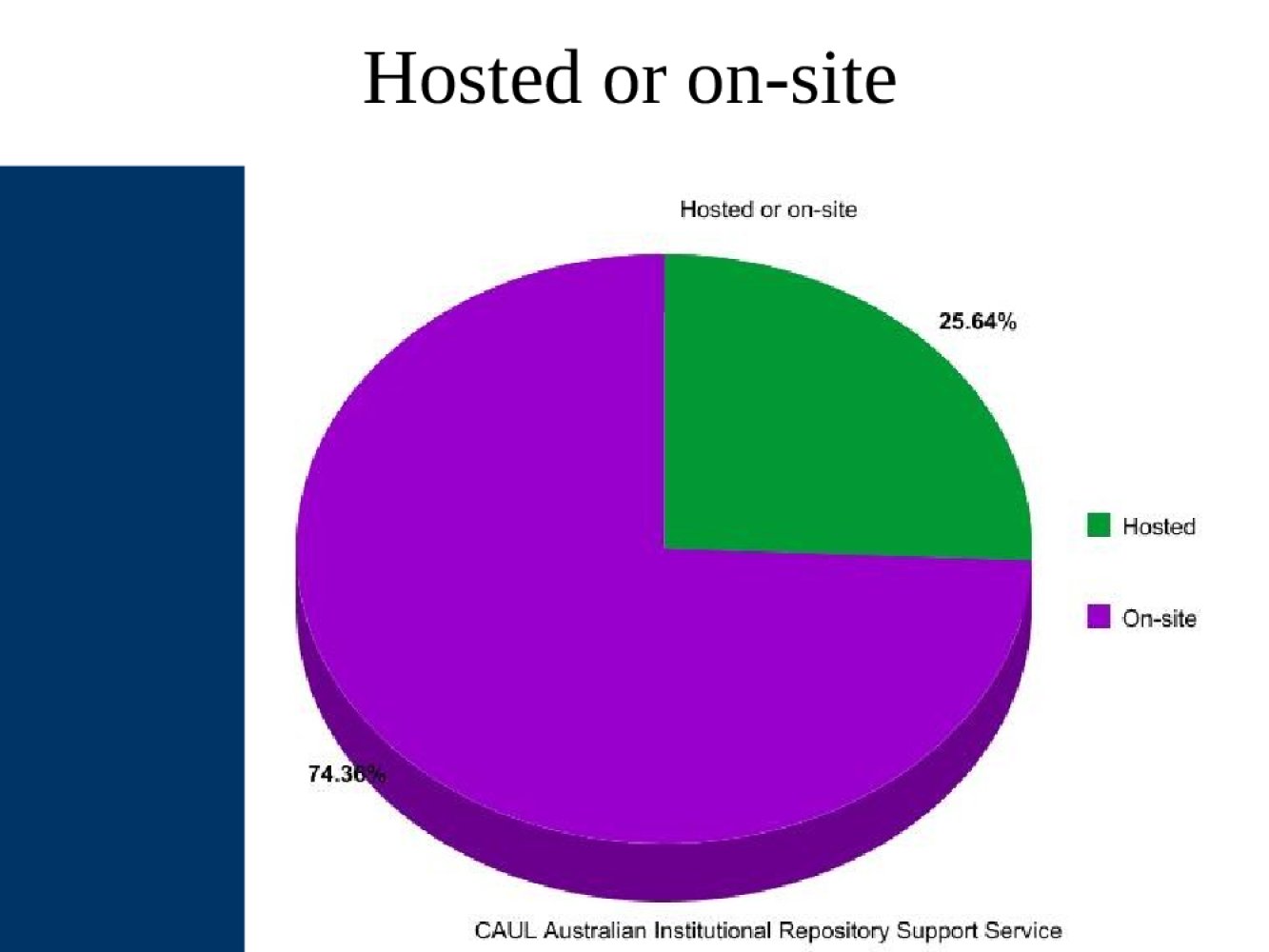 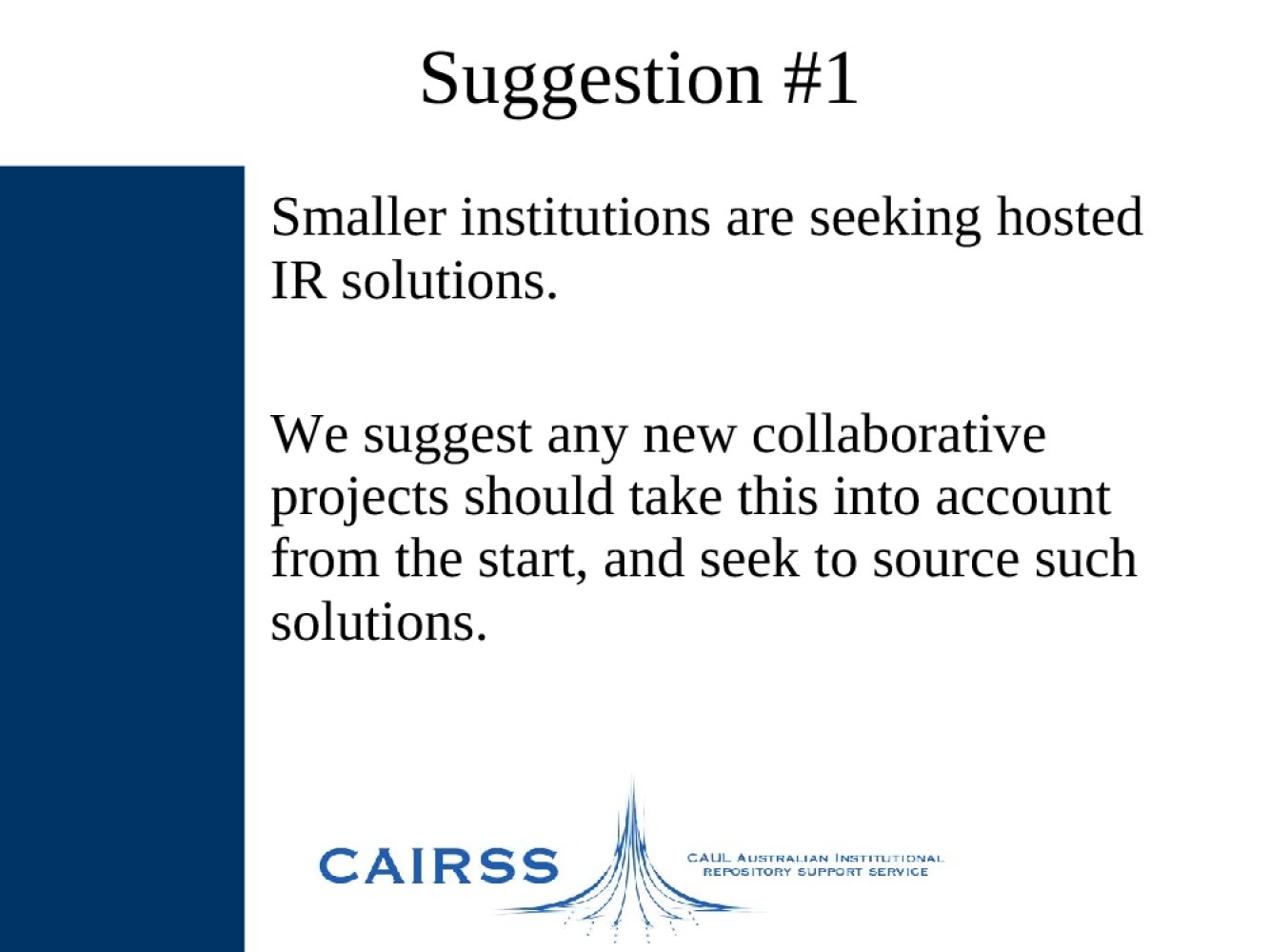 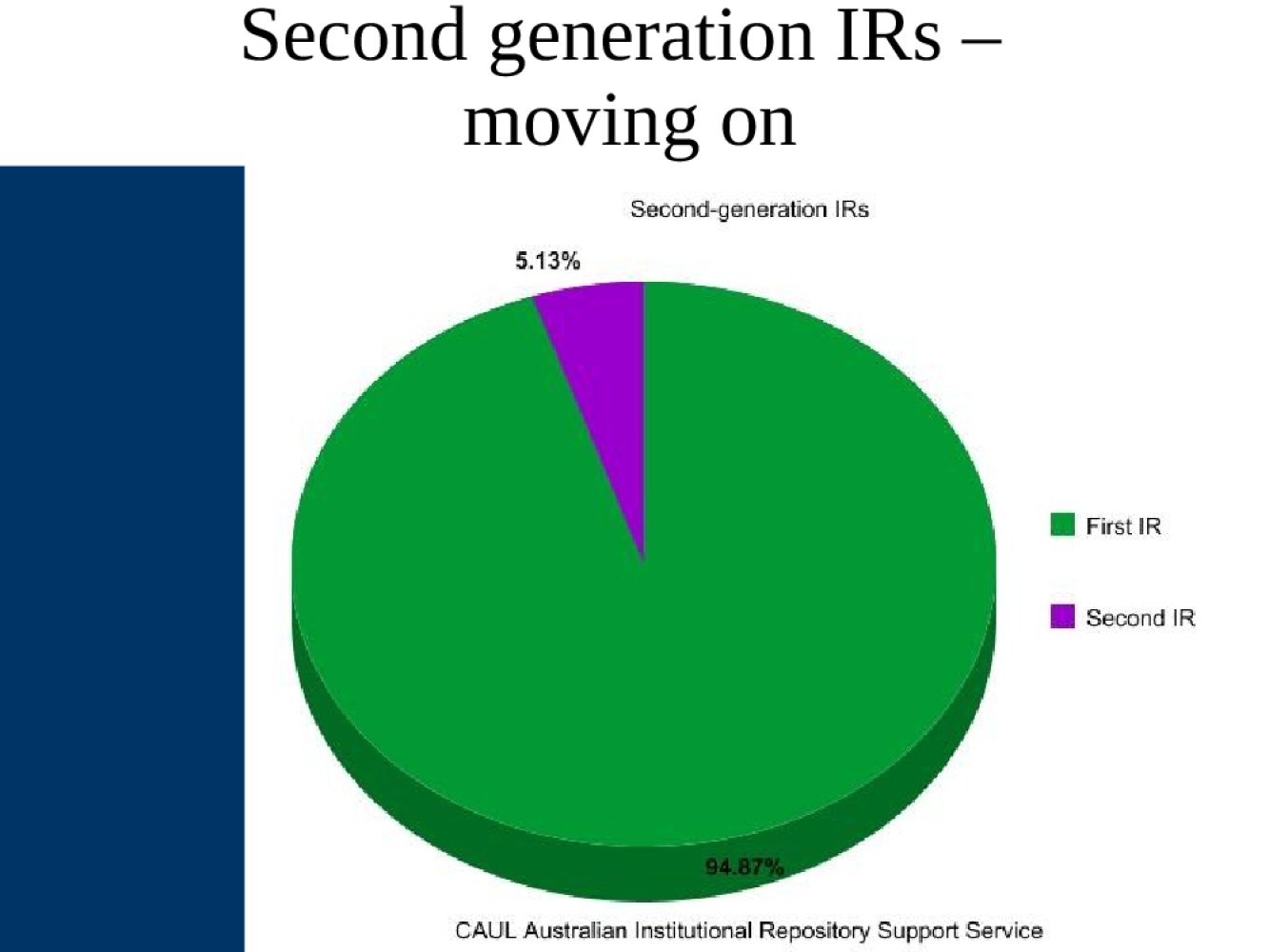 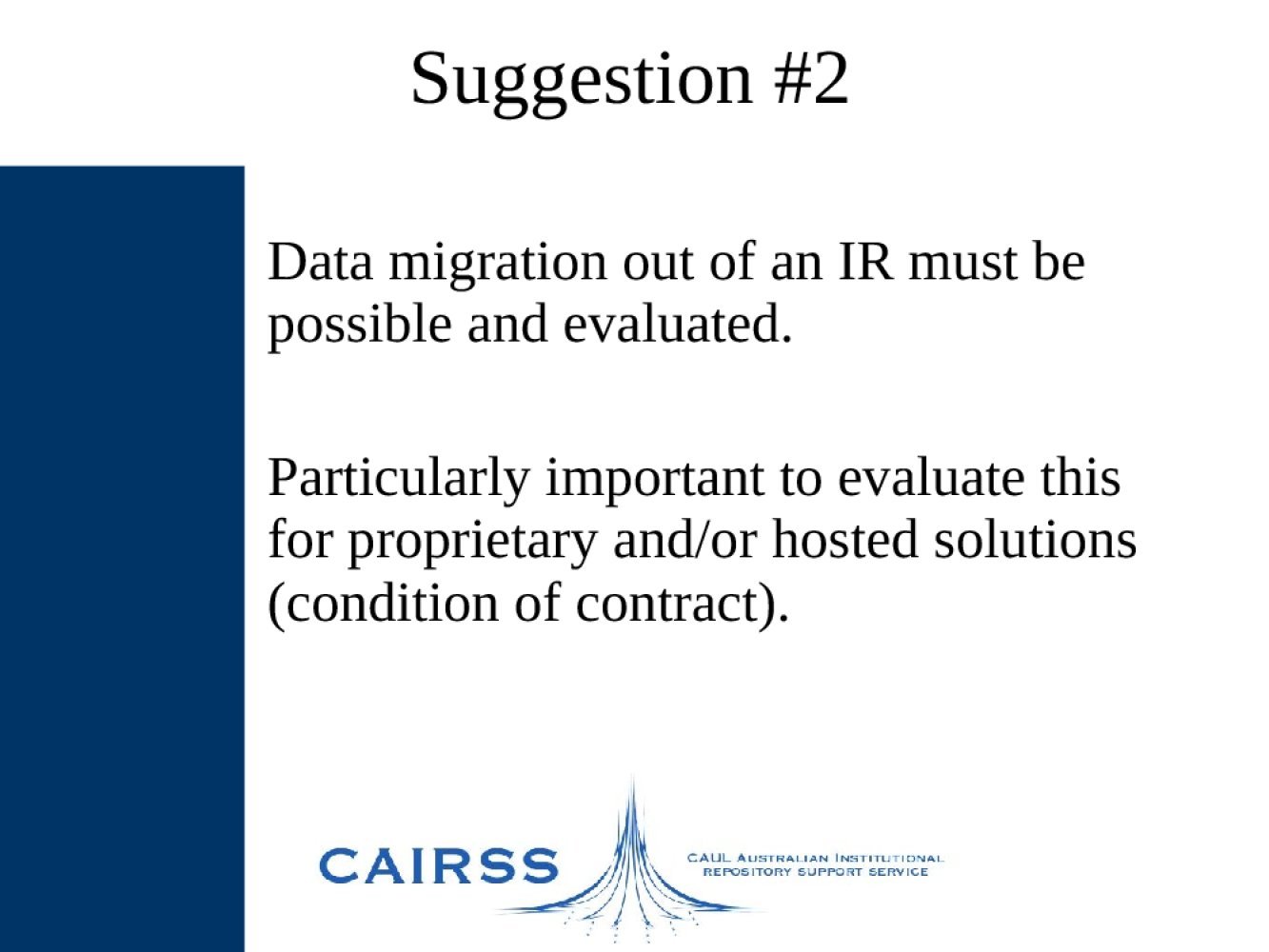 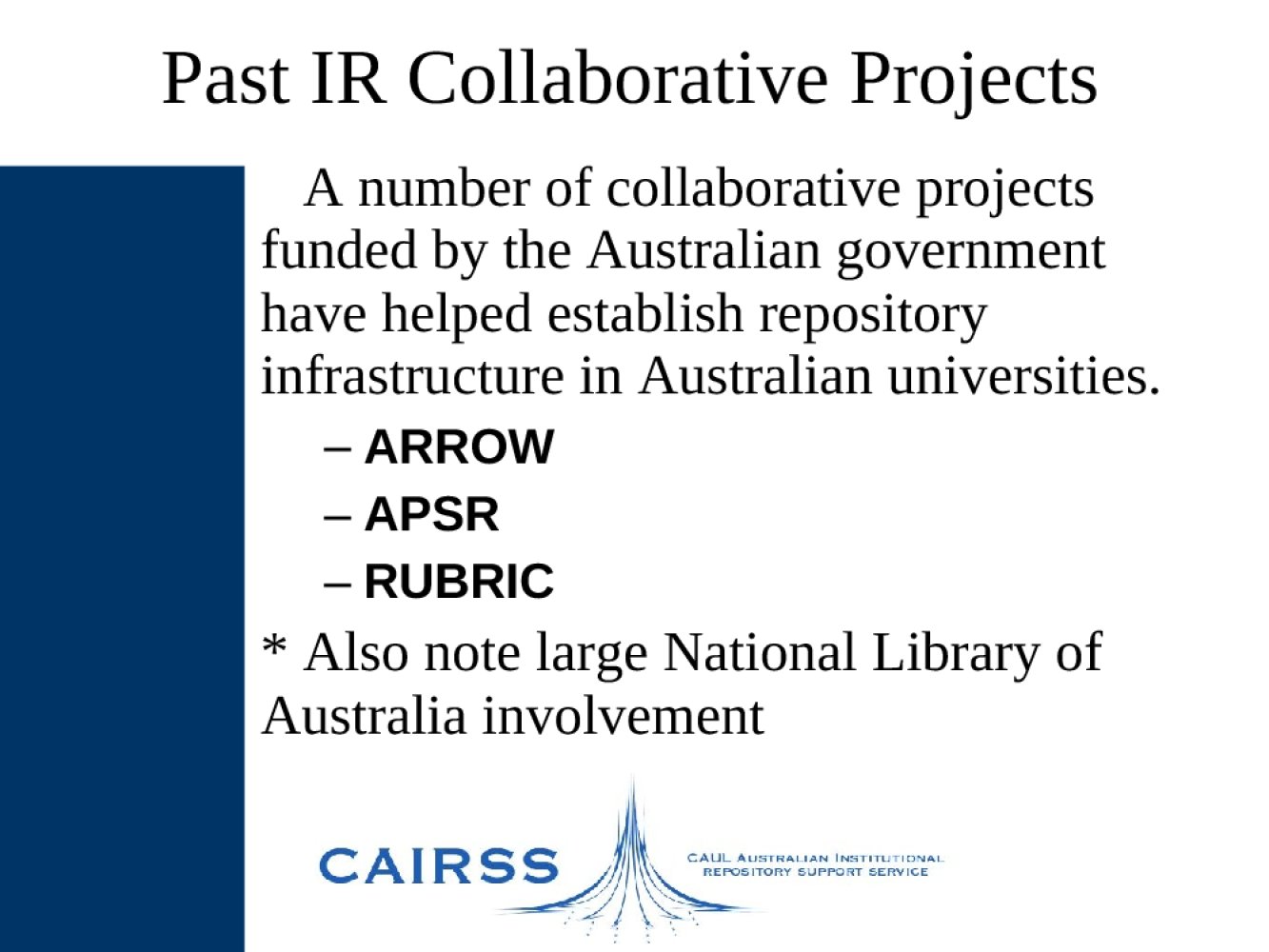 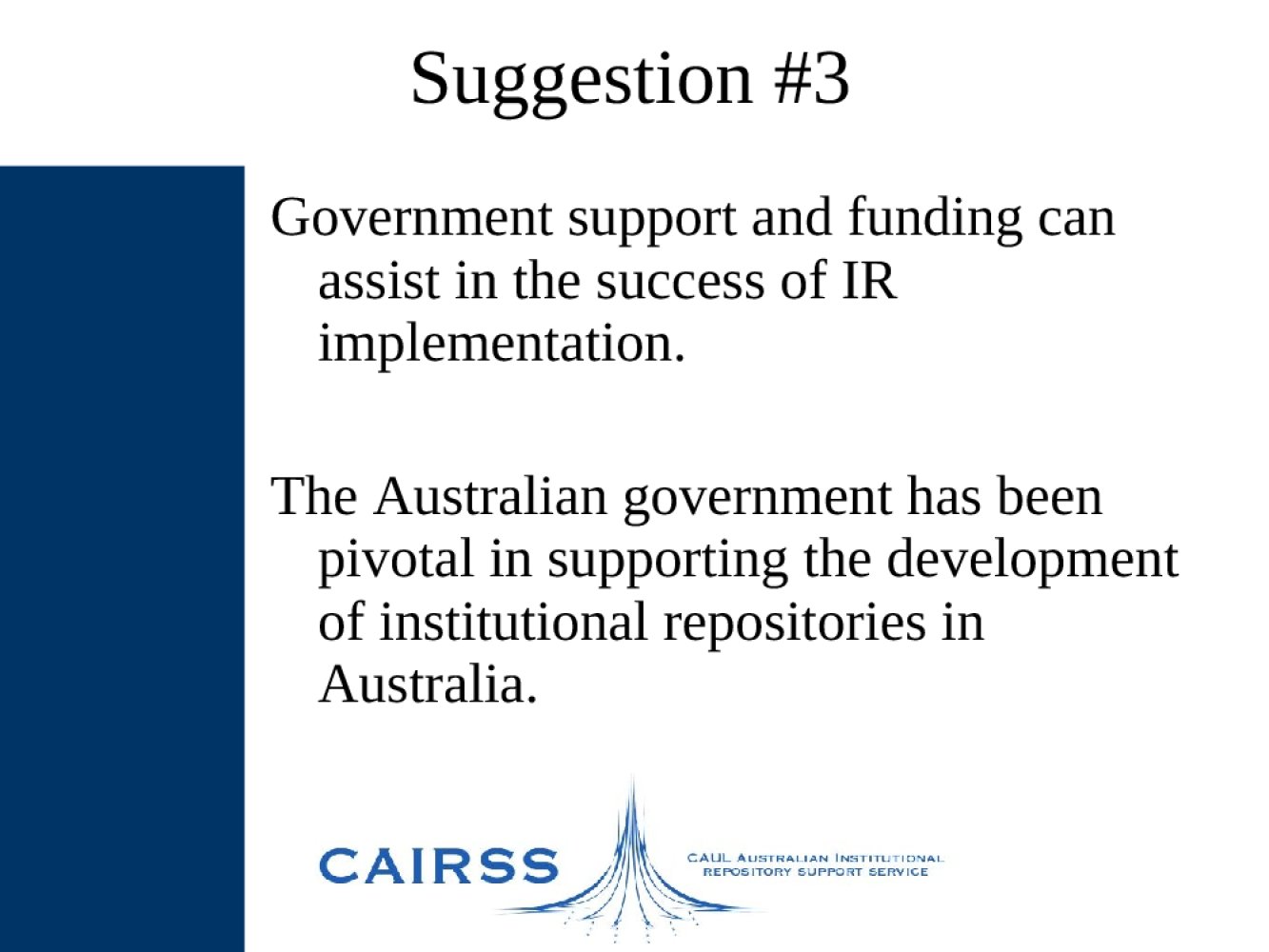 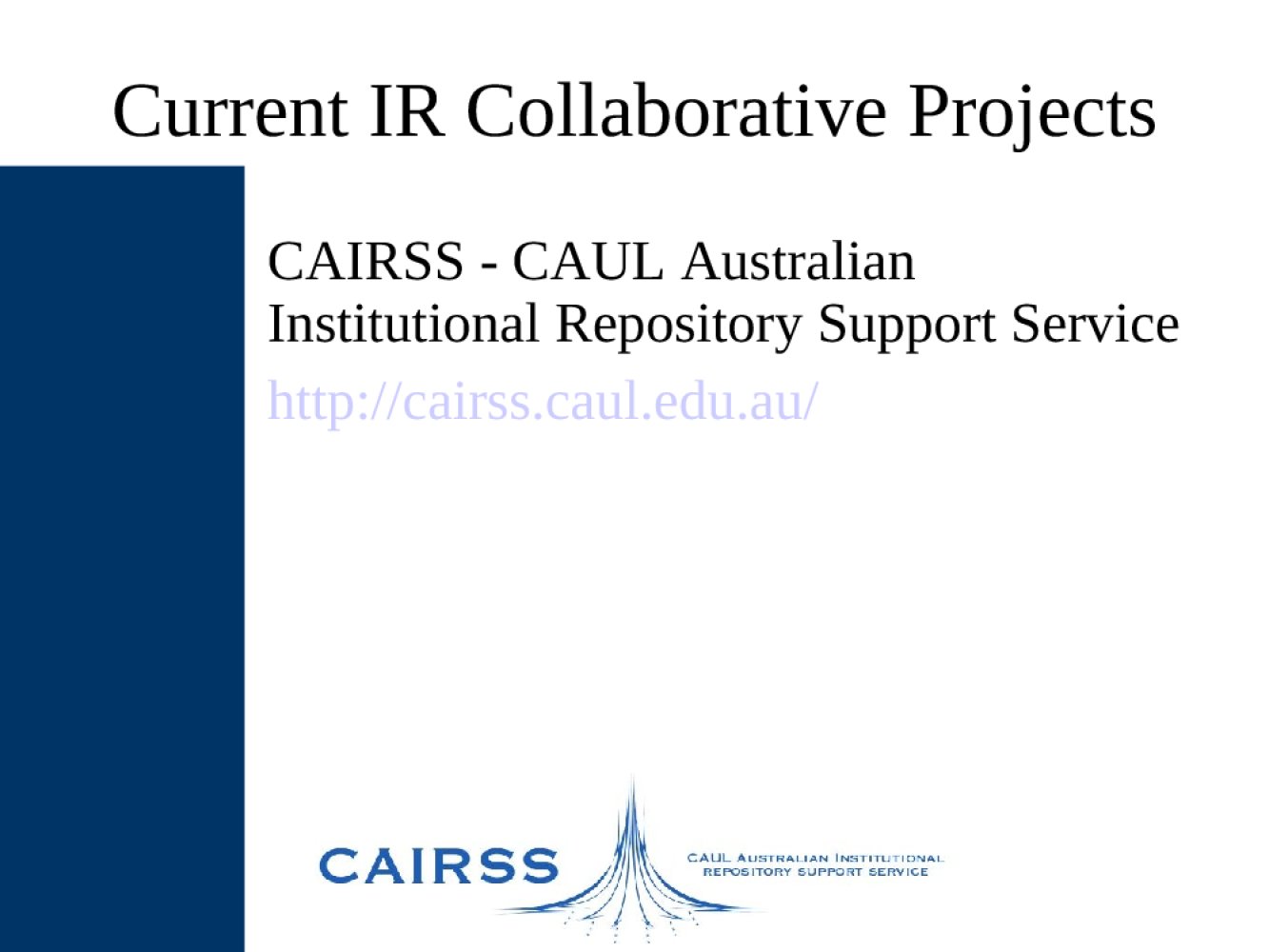 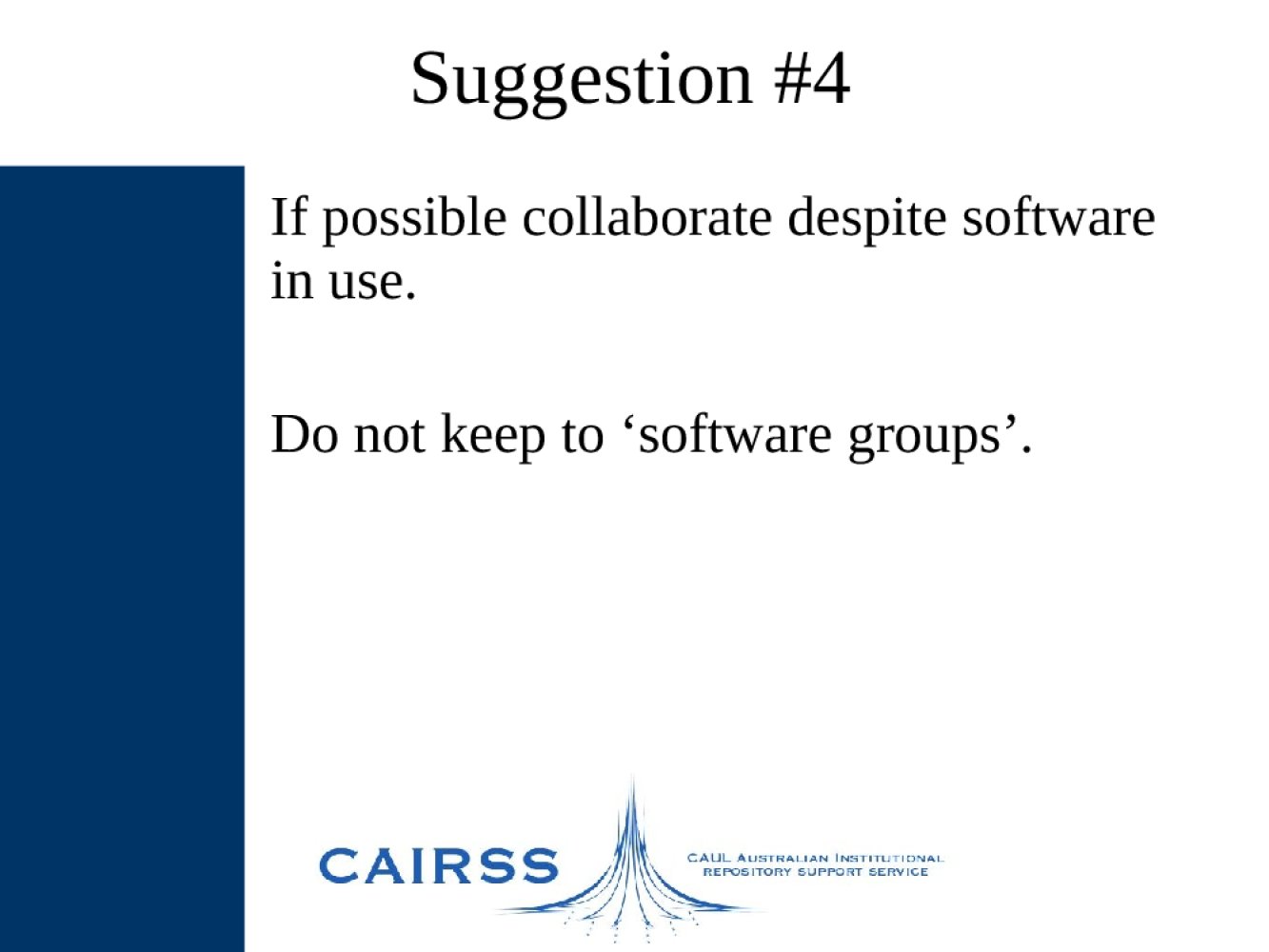 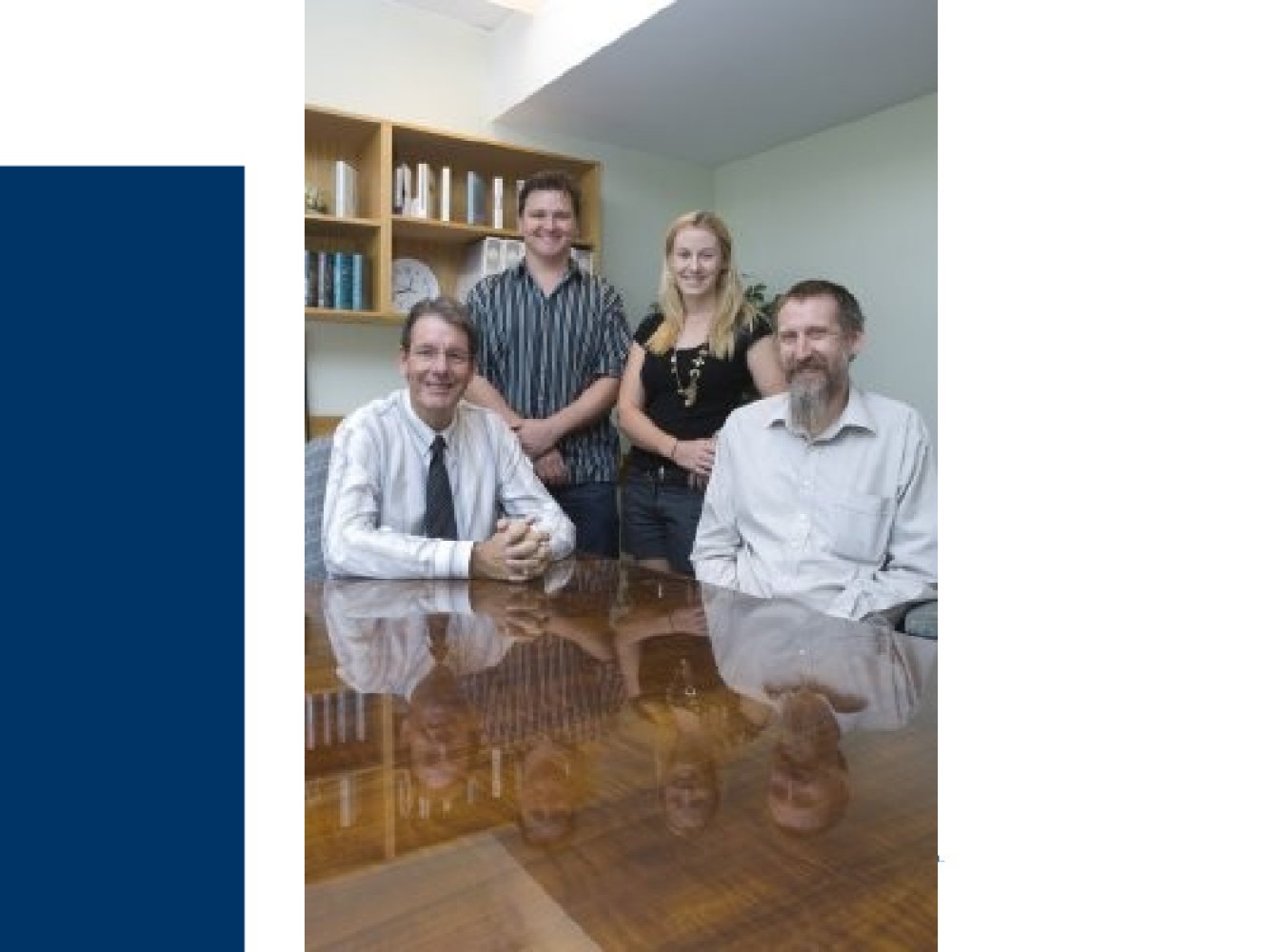 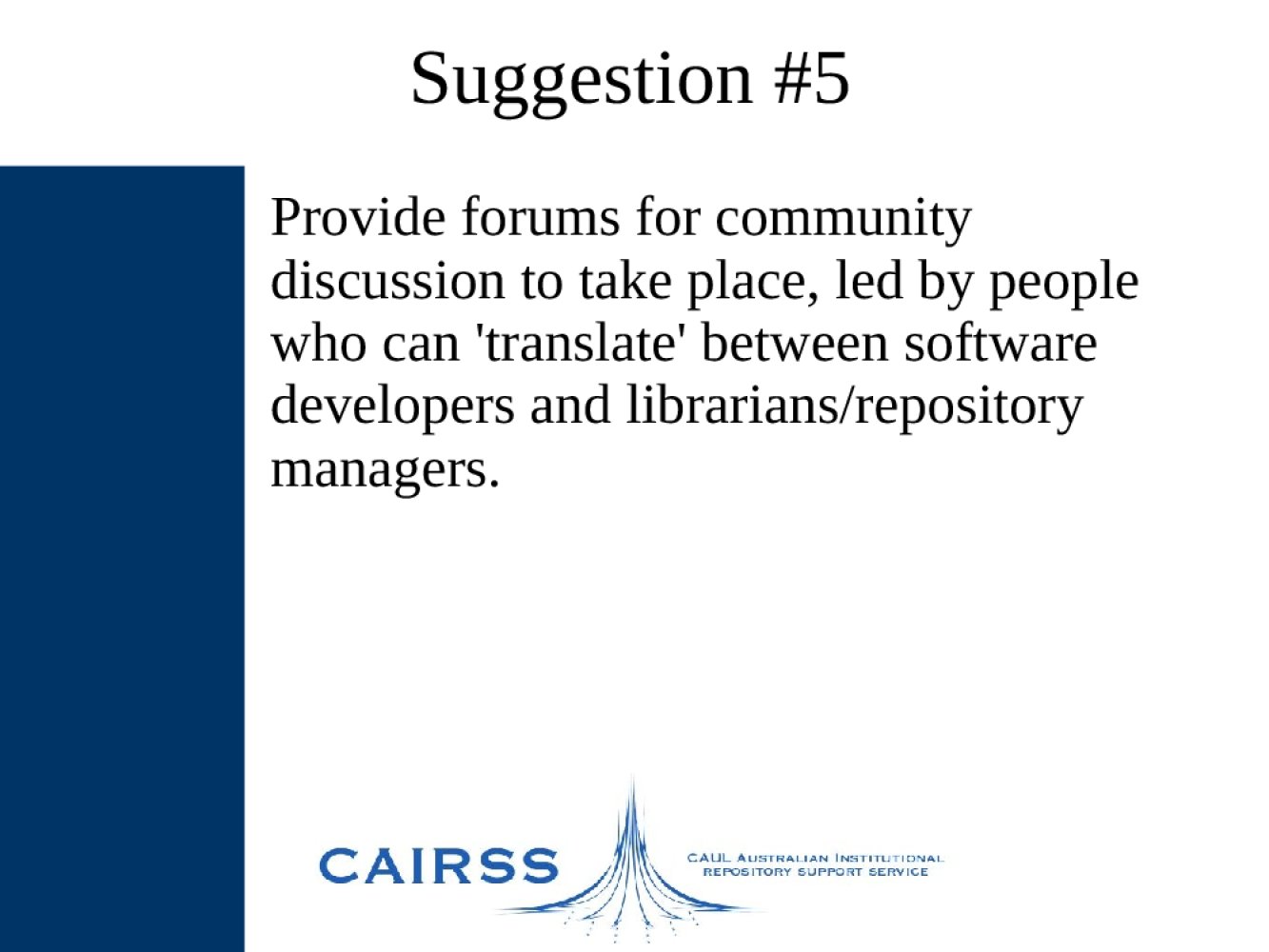 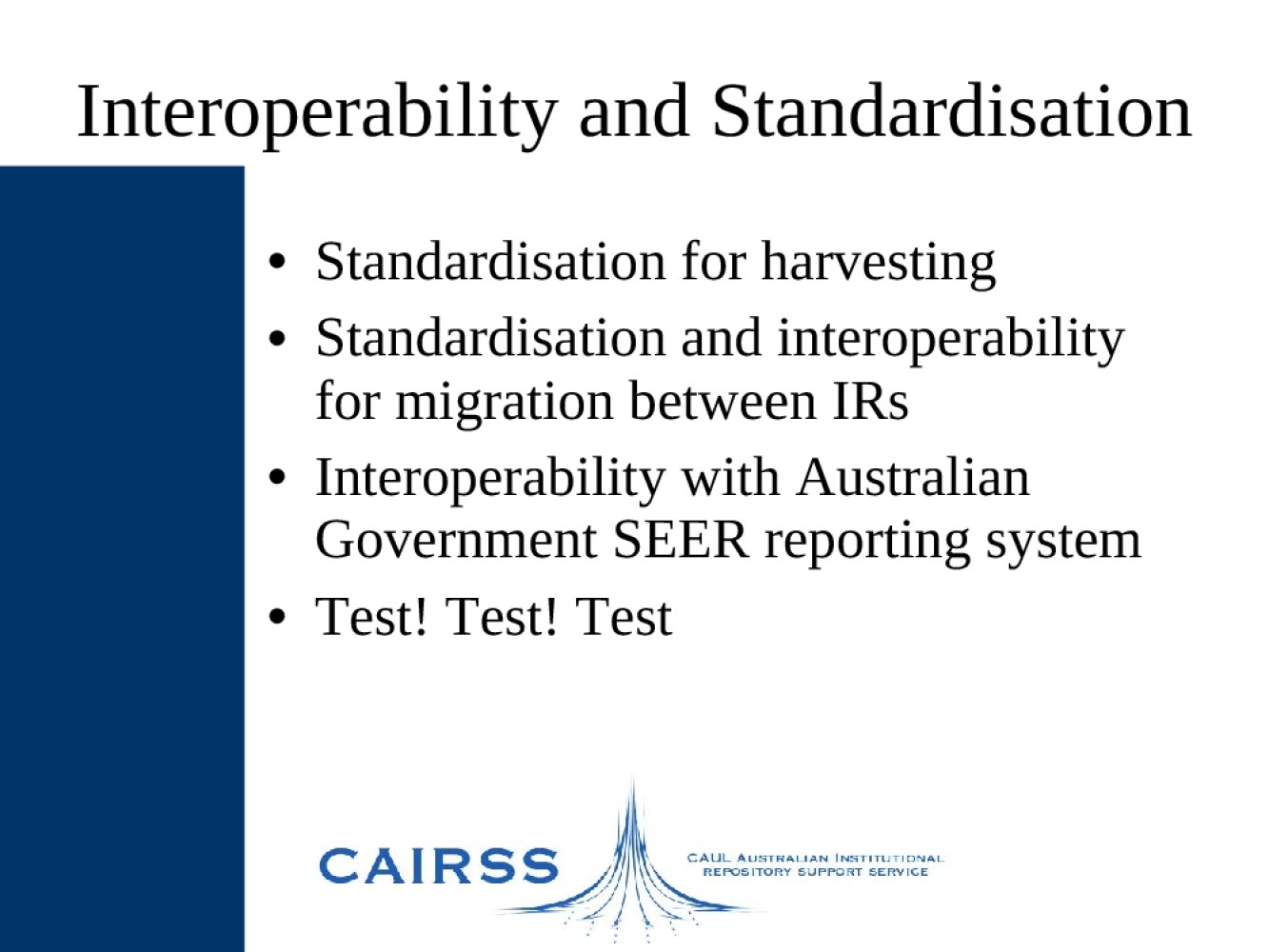 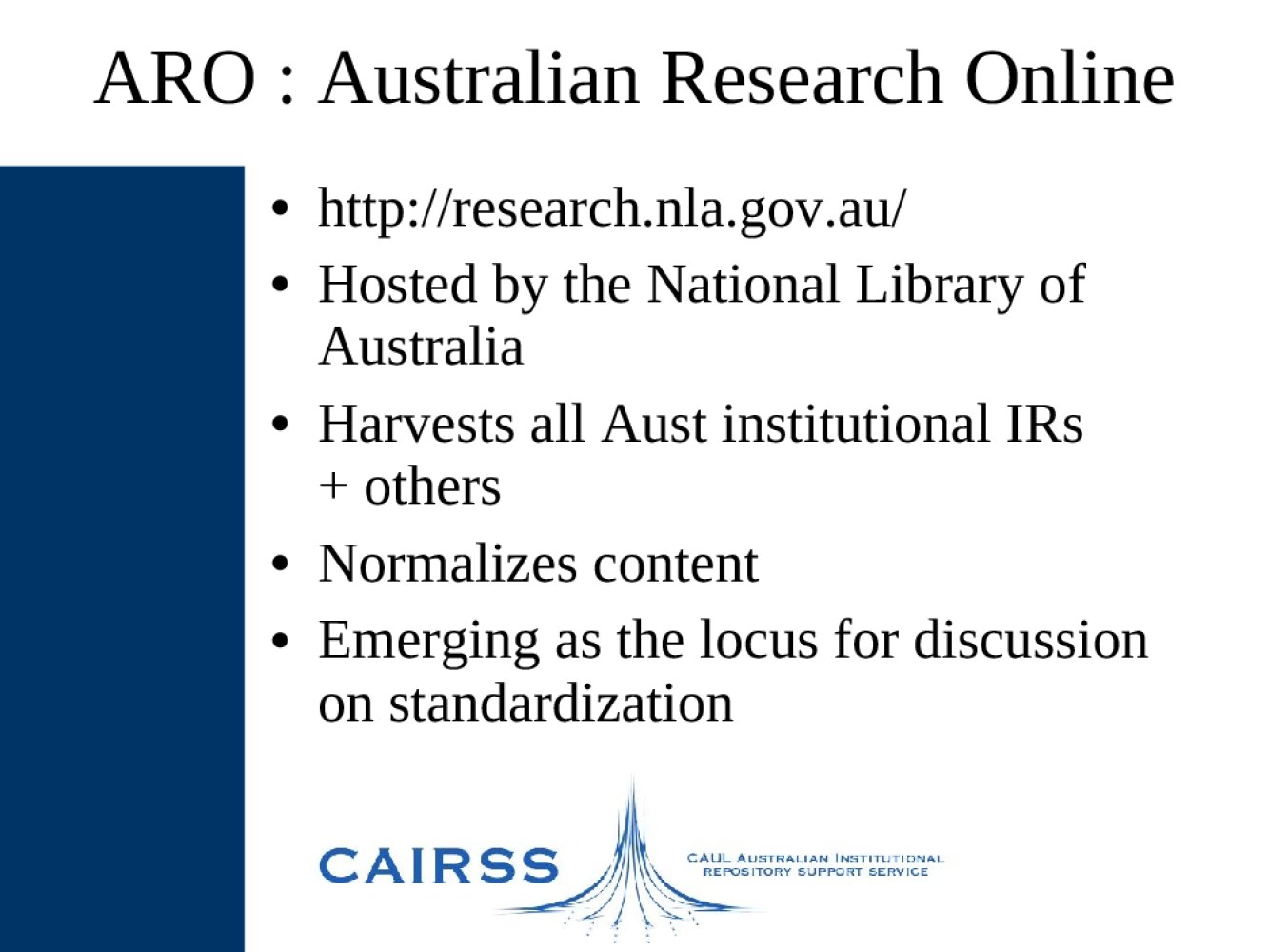 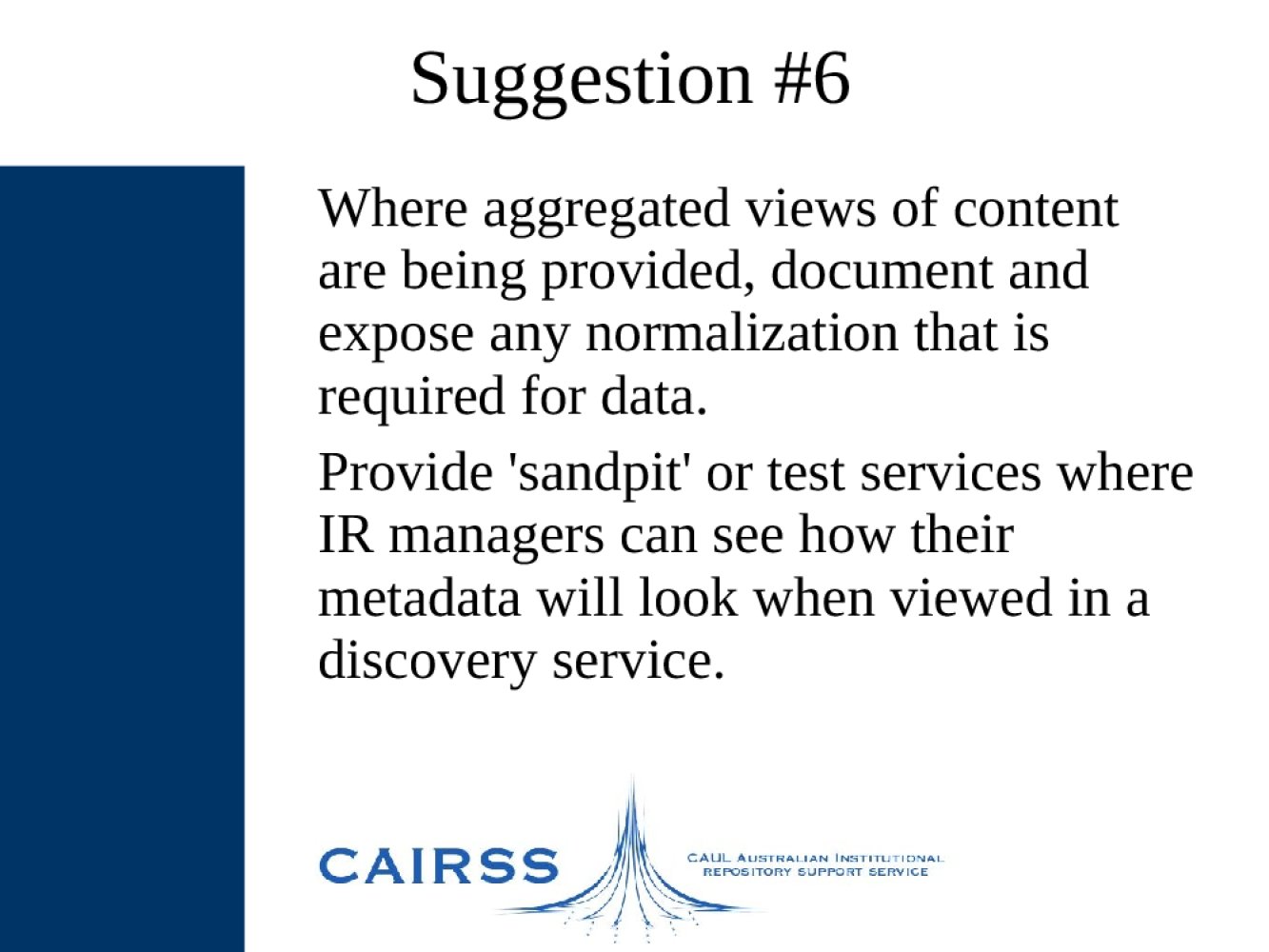 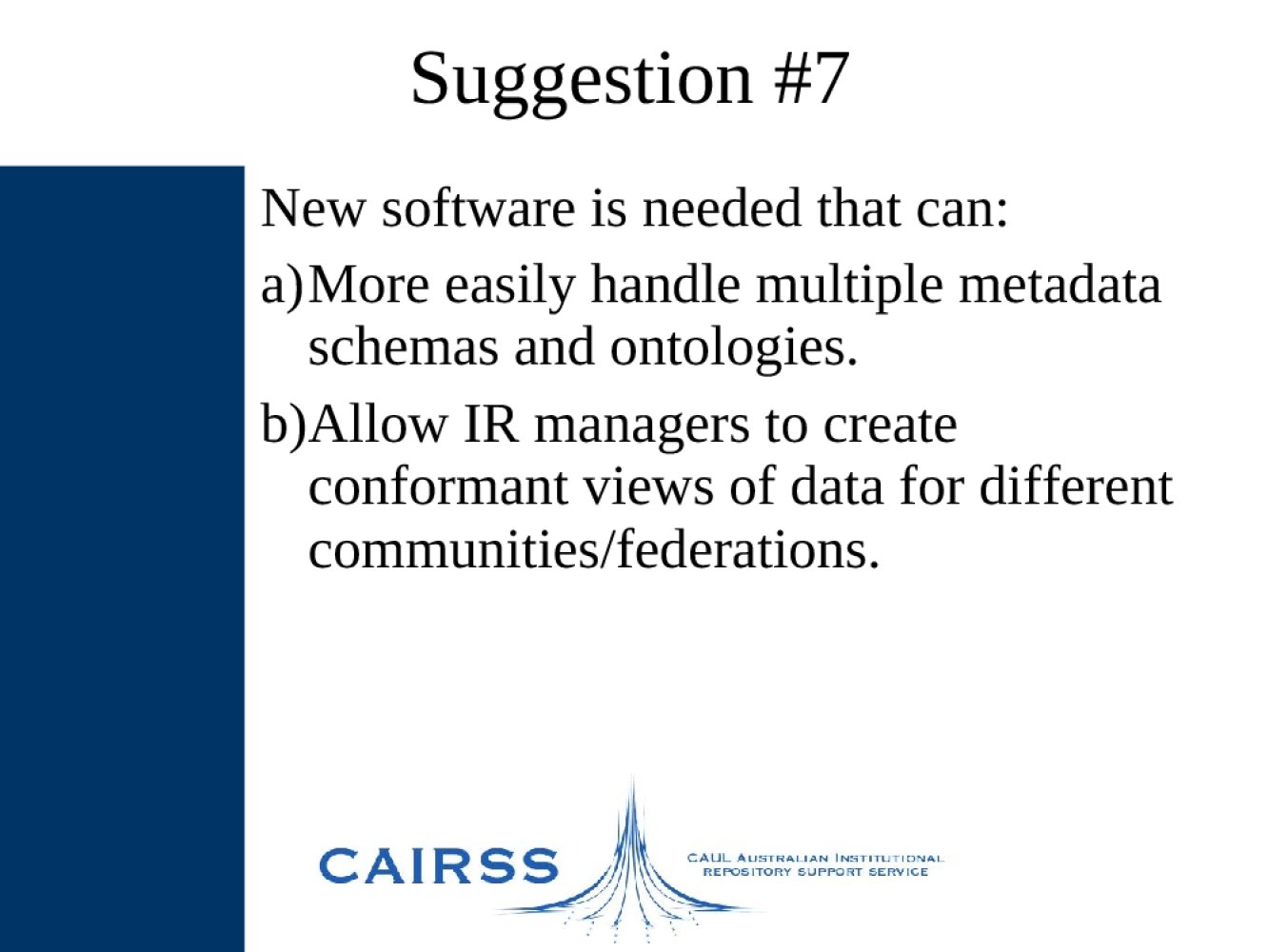 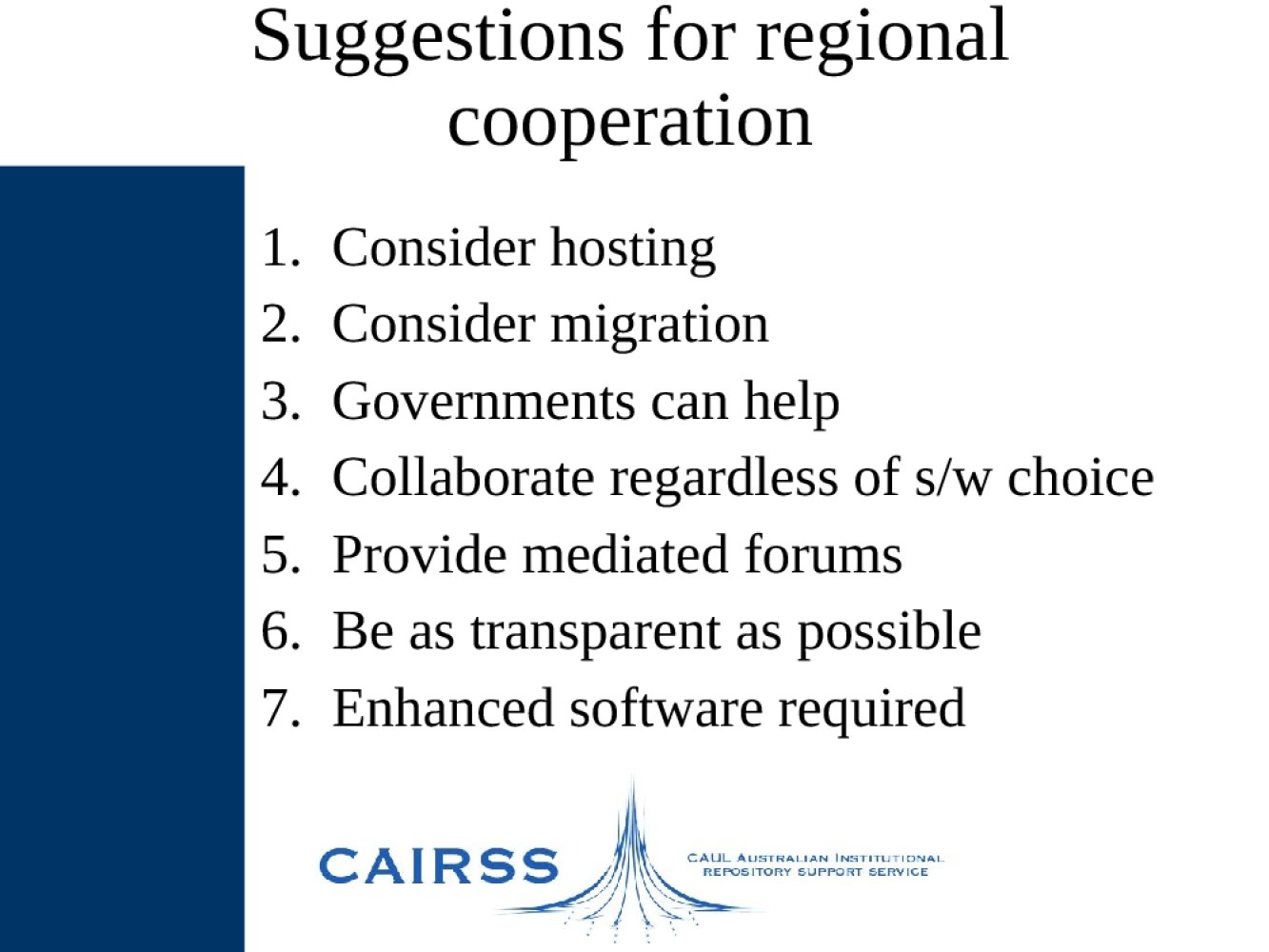 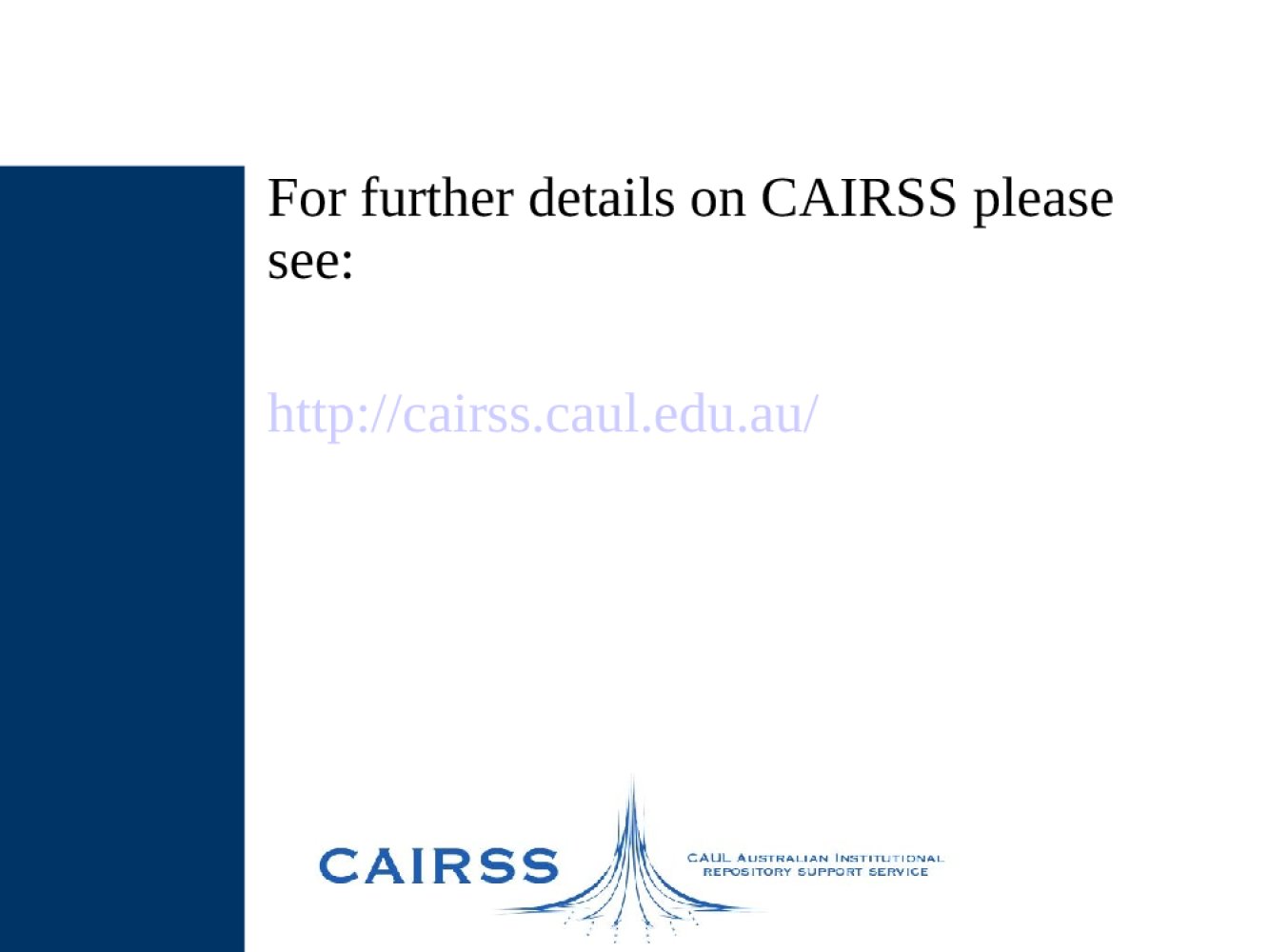