So in my last post I mentioned the household ePrints repository. I was joking, kids. But it sort of got me thinking. I bet the Les Carr household has one. Maybe I should do something for the family heritage.

Anyway, here's a bit of ephemera I found in a plastic sleeve in my song-lyrics folder. A poster for a band I was in in 1987 which won (I think we tied for first, or did we come second?) the Sydney Uni Band comp. We were originally called something else but when we found out we were in a heat up against a band called 'The Fuckers of the Dead' we changed the name and revised the repertoire. As far as I recall that did the trick and they didn't show up. We didn't have a drummer so we made a backdrop out of orange plastic with a black silhouette of a drum kit and a spiky haired drummer and insisted that the sound guy mic it up just like it was a real one.

Can you spot which one is me and which is Ken Maeda* and which is Maxine Whelan**? (Hint, I have the bass guitar and Max looks alarmingly like her mic is plugged into a powerpoint.) She made this picture. 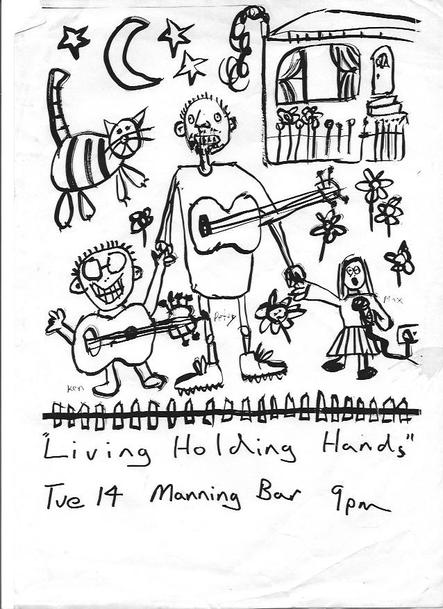 There you go. A bit of cultural heritage. I'll see what I can do with some of this stuff I have lying around as we toil away on our desktop repository project at work. How do you scan, label, annotate and tell stories about this kind of important historical material? I'm learning about how to get the music from those shows off cassette tape onto the computer right now, with a Walkman I found in the cupboard. I'd forgotten how long it takes just to rewind.

Should I expose all my band-related digital objects as a RIF-CS collection? And what if I move families? Are there protocols for taking the digital objects with me? Is there a census date like with the ERA?

* I think Ken was at that stage still playing with Tim Freedman in Penguins on Safari.

** Maxine and I shared a house owned by Victor Kelleher with his son.