It's been a while since I have whinged here about how hard it is to make web documents with Office tools.

This is actually old news, but did you know that in OpenOffice.org Writer the Save as HTML is completely stupid?

If you embed an image, lets say a 5Mb photo in your document and size it to fit within the margins, and then save as HTML, Writer will create an HTML image tag with sensible looking dimensions, say width=”400” height=”640” but it simply writes out he photo at full resolution. If you put that on the web then everyone will have to download the full image and then spend CPU cycles resizing it, which will lead to global warming, amongst other things.

Even worse, if you crop the image then the HTML export won't bother with the cropping and will just show the whole image.

In the ICE system we have to code around this kind of crap all the time. We've been dealing with the resize issue since day one and it looks like we will have to look at cropping as well now that our users are complaining.

See what happens when Linda Octalina from the ICE team puts in a bug report:

After the image being cropped in ODT file, when doing Save AS HTML, the image shown in html is the original Image and is resized to cropped image size.

She got this response:

This is not a valid bug report.

When you tried to save the document in in HTML format you got a message "This document may contain formatting or content that cannot be saved...", and that's just that what happened here: as far as I know 'HTML 4.0 Transitional' has no possibility to show cropped images, and so this information will be lost during export to HTML.

Pls. feel free to reopen this issue as ENHANCEMENT request if you find out that

And this doesn't sound good:

Even if we would implement this enhancement, we cannot because due to lack of resources. The HTML project is stalled.

Thank you for your comprehension.

Over on the GullFOSS blog they're talking about the new features they're putting in, such as “Flexible positioning of axes and axis labels” in charts. And making menus a little nicer. So there's still money to work on this OOo thing then.

It's obvious that there is some confusion here between using HTML as a core document format (Microsoft actually managed that with Word 2000 with some problems ensuing) and the thing most people are going to want to do, which is to export to HTML.

Maybe Sun's Tim Bray could give the OOo team a call to explain that there should be a way for people using Writer to publish their documents to the web? In Tim's (2004) terms Writer is 'just broken' cos it doesn't have a 'Blog This' button.

ICE has a blog this button (Atompub), which you can use with Openffice.org. To demonstrate I will now insert a picture of a man called Space Cowboy spruiking his stuffed-animal freak show at last year's Woodford Festival. The original is 4.8 MB (4995351 bytes) – the one you're looking at is much smaller, reducing global warming and computing costs. 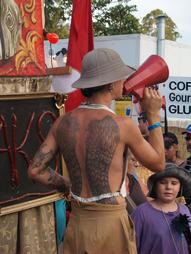 In case you've just wandered in, we're big supporters of OpenOffice.org and we use and recommend it, we're just bemused by some of the priorities at Sun. If I had Google breathing down my neck I wouldn't be treating 'The HTML project' as 'stalled'. But to be fair to Sun, the web's only about 17 years old.