At my house there lives an eight year old, who is almost certainly my son. I came home on Wednesday to find him trying to mutilate a Pokemon picture he'd snaffled off the web using the drawing program in OpenOffice.org. This was not going well: a (not great) vector drawing tool meets a bitmap image. But it does show that the Ubuntu application menu works – at least he found something graphics oriented under Applications / Graphics.

He and his mother asked, do we have something like Paint?

I thought, the Gimp's installed on Ubuntu by default, but it's a bit scary, so I had a look for basic paint programs for Linux, ending up in the Ubuntu forums as always. It's so easy to install stuff on Ubuntu – I can connect from another machine while he's playing with the web and install stuff from the command line:

Tux paint? An interface that would make even an eight year old vomit, and no apparent way to open a file. Look at that lazy penguin which appears to be sipping a daiquiri it could get of its arse1 and find me file or two. 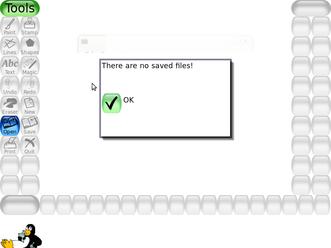 GNU paint? We found the rubber (eraser) tool OK, but the lack of undo undid that application for us.

I said, “I guess you could try the Gimp”.

He did. And he had no trouble at all. He'd say “I want to just keep part of the picture” and we said “you want a cropping tool”, and that was enough for him to poke around and find what he needed. The only drama was to do with the filesystem – he accidentally saved one of his creations in the wrong place – but we found it.

I mention this because kids understand that to use a new application you have to learn2 how it works and they don't have the unreasonable expectation that it should be intuitive, whatever that means.

I'm sure this is somehow relevant to eResearch and eLearning and the work that we do on tools for same.

1 Is Tux sipping on a straw or smoking?

2 His sister is ten, and she doesn't need to learn because she already knows everything.