I have said here many times “use styles”. So why wasn't I doing so when I could have been?

Regular readers will know that I'm a bit word processor-obsessed. In the word processor a style is name for a bundling of formatting and structural information. For example, in most word processors if you use Heading 1 style, then that helps to structure your document, and the formatting is taken care of automatically; today 18pt Helvetica, tomorrow 16pt Times. You can generate a Table of Contents automatically, and you stand a better chance of getting good HTML export.

I don't think so much about diagrams.

This week I tried out Cmap Tools, a concept mapping application that we've been working with on the ICE projectbecause some of our courseware authors use it to provide scaffolding for learners to use in constructing knowledge. We are looking at taking this a bit further, under the direction of Professor Jim Taylor, more on that soon.

I tested it out drawing a couple of architecture diagrams and I liked a couple of things about it, one of which was the use of styles.

Here's a fragment of a concept map. The orange boxes are made orange with a style called Data, and the yellow one is in style SoF, which is the working name of the application we're building; SunOfFedora. If I change my mind about the colours I can change the style and the diagram will update itself. 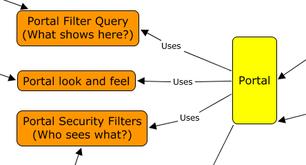 The other thing I liked about Cmap is that it represents relationships as propositions. It even shows your diagram in proposition form it you want. 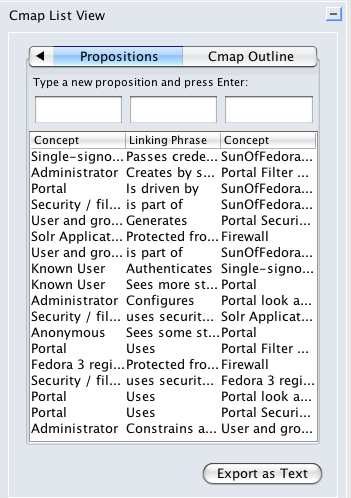 I decided that while Cmap is interesting, I don't want to use an application that forces me to store things in a certain directory and which loses my work by deciding that it's not going to save the map I've been working on for an hour or so. And I'd like more flexibility about the shape of the shapes I'm joining up.

I can achieve pretty much the same visual effect using the drawing tools that come with OpenOffice.org; joining objects with connectors, and putting labels on the connectors.

So I started redoing some of this work using Draw in NeoOffice – and it struck me that I was going to miss the Cmap approach to styles. But wait, Draw does have styles, it's just that I have never noticed, and never thought about looking for them. So for a few years I've been drawing dodgy diagrams and inefficiently hand-formatting drawing elements to look alike, just the same as many people use their word processor before discovering styles.

Now that I think about it, I must have heard of this feature, but I never put two and two together and used it in my occasional diagramming. One reason I never noticed, I think, is that it's not available in Microsoft Office (and probably by extension in OOXML) which I was using for many years; Microsoft set my expectations and I continued to expect diagramming in an office suite to be painful.