The most popular posts ever here are to do with my Trek 520 touring bike (oops – mentioned it again, more bemused visitors from Google).

I just bought the 520 a new present. It's a very bright, beautifully engineered tiny little light that cost in the region of $200 Australian. Strangely enough I recently bought eight taillights on sale at K-Mart for $2 each – a lifetime's supply! (Bought two the week before when they were $4, too) Given that we have 10.5 bikes that's nearly enough for every one of them. I actually gave one away last week to a colleague who was about to ride off from the Y-block bike rack sans-lights then realised that I have just given him $10 worth of rechargeables as well and I had to ask him to return them when they turn flat. Maybe I shouldn't put those things in those lights anyway?

Anyway, here's a kind of rambling story about bicycle lighting spanning from the extreme budget low end to the high end. Actually, $200 is not really high-end, particularly for the off-road crowd. This is not one of your useful reviews because I'm comparing cheap and improvised lighting with something really expensive.

Back in the day I used to use my Petzl Zoom head-torch as a headlight, wrapping the strap around the handlebars. I've still got that light, but in the era of LED lights I don't bother with it any more and I couldn't find it for this essay. Here's the modern version though. (Source http://www.rei.com/product/695303) 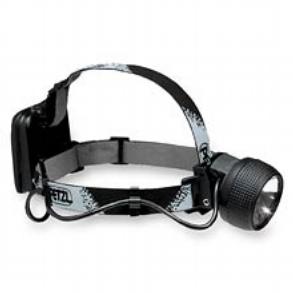 More recently, I have used an Energizer brand LED headlamp, circa $30, in a similar way. This is the second one, the first one went a bit dodgy but I lost it before I could test the lifetime warranty. 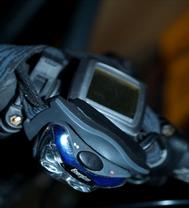 This light is cute 'cos it has both white and red modes. so I leave it in my pannier as a fill-in, if one of the kids has lost or destroyed or flattened one of their lights when I pick them up from after school care I can lend it to them, and because it has an elastic headband it's easy to improvise a mounting system. It's also great at music festivals, looped through your belt, for reading the program in a dark tent.

More recently still I decided that since the Trek 520 goes a fair bit faster than my old mountain bike and I ride on unlit roads and paths for part of my commute I should get a proper bike light. Bought a cheap (again, $30) headlight with 5 LEDs. It's a bloody awful thing. throws a feeble, spotty beam and it has a stupid plastic mounting clip. These are all over the place with various branding. Stay away. Here it is: 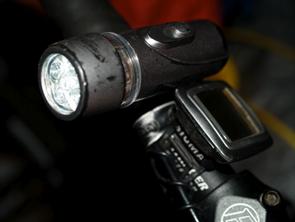 Meanwhile, the kids have been bike commuting for the past 3-and-a-half years, and sometimes now they have to ride home from after school care in the dark in winter. Initially I bought LED taillights, but they both got lost and/or broken in a week or two. All lights now seem to come with stupid plastic mounts that are really easy to break, and kids' bikes take a beating and kids lose stuff. In the end I dug out a couple of old flashing taillights from my bike-bits crate and stickytaped them to the bikes. This is a good system, as the batteries last all winter, so when the days get longer I remove them. The $2 lights from K-Mart are taped on there this winter. They were actually sold as brake lights (!) and come with a dodgy little switch you are supposed to somehow attach to the back brake but it turns out they work as taillights anyway.

The idea with the children is to have lights for people to see us not us to see stuff as we're riding on lit footpaths and through a lit park, theoretically at moderate speed – and appropriate technology means something that glows a bit and doesn't cost more than we can afford to lose.

Here's a $2 light taped to a $10 secondhand BMX, photographed at an interesting angle. 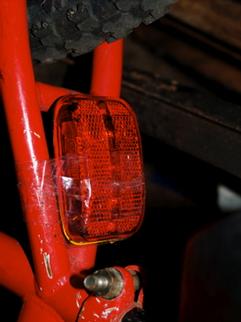 The headlights are old supermarket torches with dim incandescent bulbs attached with hose-clamps. They stay on-bike all winter too, but I do need to extract the AA cells and recharge from time to time. This is two hose clamps (less than $1 each) linked in to each other, one around the torch and one around the handlebars. 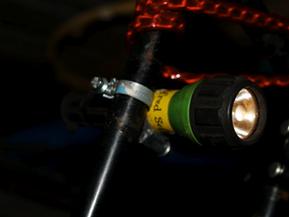 The long suffering Sandra (my partner) has a cute little four-AAA LED torch which I got as a speaker's gift a the Open Publishing conference in Sydney some time stuck on to her bike in the same way. This bike also cost $10, it's a red ladies Malvern Star 10 speed, but it was a bit overpriced I think as when I got it home I had to pump up the tyres and oil the chain. 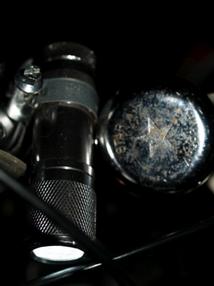 Which brings us to the DiNotte Ultra 5. When I decided to buy a decent light I rang a bike shop in Melbourne I've dealt with before. Why did I ring them? Cos they didn't return my emails (they don't have an official contact address, they have a bunch of random email addresses you can try one by one, to go with their web store that sorts everything by manufacturer, not by function). The bloke there was very helpful. He said to get a decent light I would need to spend $200, and it would have to be one of the rechargeable halogen lights, and to do my homework. If he'd known how to close I would have bought one over the phone.

So I did my homework.

I thought I'd like something that takes rechargeable AA cells, so I'm not locked in to some proprietary battery pack or charger system. And I was really looking for something that didn't have stupid flimsy plastic mount. Enter DiNotte. You can buy these things in OZ from a couple of places, but it's way cheaper to get them from the manufacturer in the USA, complete with four AA cells and a 'worldwide smart charger' you can't plug in here. I filed that with my other battery chargers and I thought of Rick Jelliffe and hisdullest most trainspotterish blog.

This is a very beautiful design. A tiny aluminium light that you put on with a rubber o-ring, and a miniscule battery-pack (there's a spare battery holder) that velcros on to the headstem. I only got it today, it arrived while I was at work, but I rode home and immediately took it out shopping and detoured to a dark bike path on the way home. This thing really works. With a short commute like mine and the spare batteries it will be more than enough. 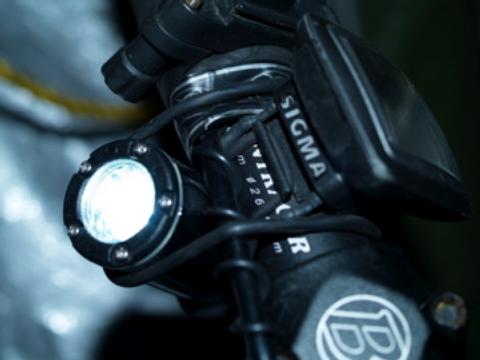 I have seen some comparative reviews online with photos, so I thought I'd go out on the driveway and take some shots. Problem being (a) my short attention span (b) the tripod is not what it used to be and is missing some apparently important parts, like part of the legs and the screws to lock things down and (c) this is stupid, but here are two pictures comparing the DiNotte and the dodgy LED light whose name has rubbed off. You really don't want to look straight into the DiNotte even at 20m. 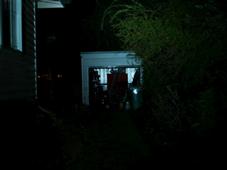 DiNotte Ultra 5, showing our wheelie bin and the contents of the garage where you can see a couple of bike reflectors. In real life you can actually see the driveway quite well too but not in the photo. You can tell by the well-lit climbing-rose that the light is aimed way too high.

For low-speed trundling through the park, a little torch is all you need to stay legal and give the pedestrians a bit of a chance to jump out of the way, but for road or trail riding it's surprising how much lighting costs; you can buy a pretty good bicycle for just twice the price of one little headlight. But I'm figuring that this DiNotte is at least a 20 year light. (Oh, and decent tickets to Bob Dylan in Brisbane in August cost almost as much). And the hose-clamp trick is really good, as is the sticky-tape system.