Another cycling post. You have been warned. This is how I made a usable bicycle trailer for around $25 Australian ('cos of a Father's day special at SuperCheap Auto – add $6 at other times of year).

I'd been thinking about getting a bicycle trailer for some time. Actually, since our kids were little, when I considered getting one of those kid trailer / strollers. But the kids are bigger now and can ride their own bikes.

I wanted a trailer for going to the markets, in case I get a whole box of apples or a tray of mangoes or some plants, and for going grocery shopping.

After some deliberation I decided that the best buy was the BicycleR evolution line, distributed in Australia by Chainring Transit Authority. But they're out of stock at present.

Anyway, recently my partner, the long suffering Sandra, asked me to get her a moving trolley cos they were on special for $20. That's an astounding price for a heavy steel thing that's been shipped from China to Toowoomba. It has 10” pneumatic tyres that claim to be good for 250kg (each!) at 30psi. I think the flyer says that it can move 250kg. Maybe not with bits cut off it, though.

Looking at the thing I saw it had a bike trailer inside it. All I had to do was cut off the bits that were not part of a trailer.

I bought me another one and took a hacksaw to it. 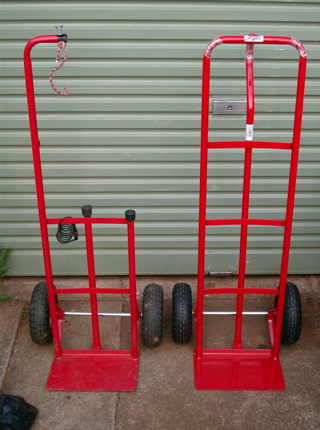 But even with those bits cut off and the stumps capped with rubber chair-feet it can still be a trolley.

Here's the trailer reverting to being a trolley at the PCYC markets in Toowoomba. 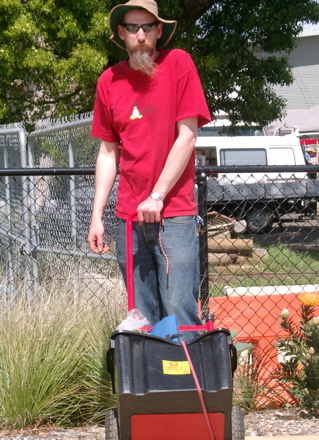 Here's the trailer coming home from the markets, with the box of veges flipped 90°. (If you look closely you can see that the box has sprung a leek :-) 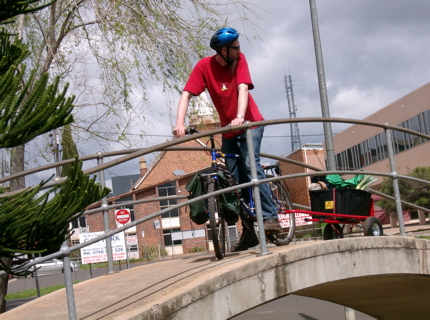 And later the same Sunday the 6 year old and I took it all the way from our place near Queen's Park up East Creek to Stenner St and then to the retailer called 'The Good Guys' to buy a new microwave oven. We made it. No speedo on the old bike but that's got to be more than 12km round trip.

We were all impressed with both the boy and the new trailer. 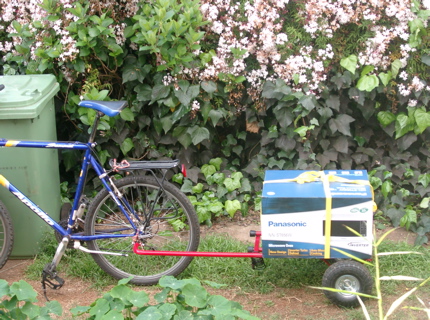 On Monday morning his back tyre was flat, possibly tired from the long trip – so the kids ended up going to school in the car (gasp!). But I was home early enough to replace the inner tube and give the trailer another run. I took their bikes up to school to collect them. 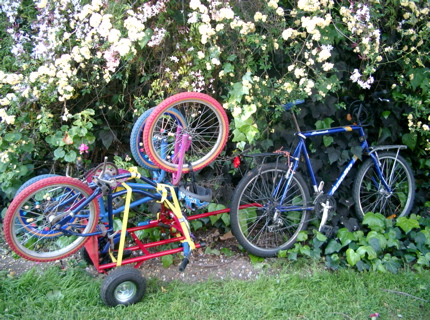 Have a look at the high tech hitch. It doesn't have too much play in it, even though it looks like it might. 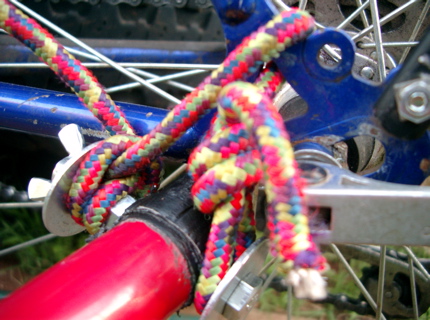 That's a ¼” bolt, two washers, two nuts and a wing-nut some black tape and a bit of climbing cord. And a clove-hitch and a figure-of-eight knot. I'm not tying this to my Trek 520 just yet – need to work out a less scratchy method.

The Bikes at work website (they sell trailers) recommends a hitch that attaches to the lower left side of the bicycle frame, like mine. It doesn't recommend using a bit of rope, though. I thought of that by myself.

And the best thing? Lots of people write about how their trailer is so quiet and tracks so well that they forget it's there. You aren't going to forget this one. It makes a noise, like, um, a $20 moving trolley being dragged along too fast. 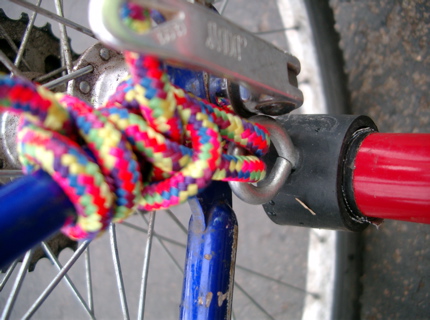