The most popular page ever on this site, by far, is the one about my Trek 520 touring bike which I bought in Toowoomba, in Australia, where I live.

Here it is – on my feral driveway. 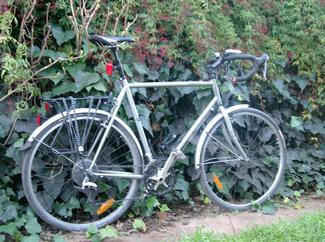 A couple of regular readers were annoyed that I strayed from the normal fare of word processing and XML but it brings me a steady stream of Googlers. I might figure out how to start up separate feeds for technical posts and cycling posts. Maybe. Anyway, there will be a couple more cycling posts coming soon. We have a new bike in the shed that I need to talk about.

One of the nice things about posting about the Trek 520 was meeting one Simon Troman online. He emailed me with some advice about the numb toes I was getting from the Specialized Body Geometry Comp MTB shoes.

Simon suggested that this might be due to soft soles, causing the shoe to flex over the pedal. Not in this case – my shoes are very stiff. Subsequent discussion suggests I should try moving the cleats back a bit. I haven't tried that yet. I have a feeling my toes might hit the mudguard (fender) if I do. But with thick socks in winter I have not been doing the shoes up as tightly as I did in summer with no socks and I'm having fewer problems with the toes.

Simon works for a Canberra bike shop part time. I've never been there, but based on Simon's willingness to help me out over the net I'd recommend a visit if you happen to be shopping for a bike in Canberra. Try Bike Culture in O’Connor. They can sell you a Trek, I gather.

Anyway, at around 7 months of age the bike has now done 2000km, mostly on the home, school, work, shops, home run so I thought I'd give an update.

Everything still works, as you'd expect from a decent bit of machinery. In contrast, the $340 Apollo mountain bike that preceded it was was starting to show its age after this kind of mileage with gears not shifting properly and brakes a bit funny, not to mention the broken back axle (but then it was carrying me and a 20kg kid 15km per day 3 days a week).

The Trek 520 doesn't look new anymore – there are a few scuffs on the frame from bike racks, and collisions with children and the like.

Next step is to buy a trailer, to make trips to the markets, supermarket, nursery, hardware store, and picnics  a bit easier. True, I can put a whole box of apples on the front rack of the Apollo. And a big load of veges in the back panniers. And more in a backpack. But a trailer would be simpler. And I could hitch it to the 520.

I like the look of the BicyleR Evolution trailers. I have no desire to have  an xtracycle.