ptsefton.com
I attended this [data newsroom](http://www.eventbrite.com/event/4900494511) (\#datanews) event in Melbourne Monday Feb 3^rd^ [Correction - it was the 4th] 2013. David Flanders asked me to come prepared to give a talk on tools and techniques for embedding data into web pages, particularly using Schema.org, the corporate sponsored ontology of everything that matters for commerce.

So here are my semantically rich^[i]^ notes for the presentation. This is neither a tutorial nor a coherent story, so you may want to leave now, but there is a picture of Tim Berners-Lee about half way through.

You can make new things happen. Let other people or machines do things with the data. Here’s an example by Tim Sherratt showing how data embedded in the page (left) can drive new behaviour (the stuff on the right). 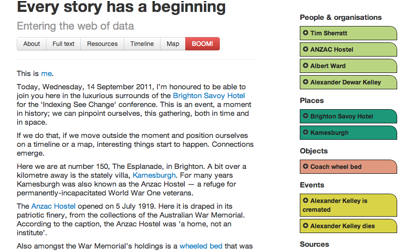 (I have added a couple of tags to discuss later)

Many sites are generated from structured data, which is often stored in databases. When this data is formatted into HTML, it becomes very difficult to recover the original structured data. Many applications, especially search engines, can benefit greatly from direct access to this structured data. On-page markup [#inlinedata] enables search engines to understand the information on web pages and provide richer search results in order to make it easier for users to find relevant information on the web. Markup [#semanticsyntax] can also enable new tools and applications that make use of the structure.

A shared markup vocabulary [#sharedvocab] makes it easier for webmasters to decide on a markup schema and get the maximum benefit for their efforts. So, in the spirit of sitemaps.org, search engines have come together to provide a shared collection of schemas that webmasters can use.

The point of this, for the vast majority of web practitioners is to get into the world of ‘rich snippets’. If you use the schema.org way then you get ‘better’ search results – but you’re also allowing the search engines, and anyone else who views your page to use the data. Right now if I search for movie times at my local cinema I enter a Google-trap which shows me films and when they’re on with no link to the cinema site itself. It’s also hard to tell what role Schema.org plays in all these search engine things – some of the data you see is harvested using older conventions for data services and who knows, maybe the cinemas just give Google a spreadsheet with the movie times in it.

For data journalism and research, we presumably want to get the data out in a form that it can be reused so the concerns are different – you want the data to be used, and your part in its collection or creation to be cited.

#### The other thing you need to know about: RDF

RDF is the Resource Description Framework.

The Resource Description Framework (RDF) is a family of World Wide Web Consortium (W3C)specifications ^[1]^ originally designed as a metadata data model. It has come to be used as a general method for conceptual description or modeling of information [#sharedvocabularies] that is implemented in web resources, using a variety of syntax formats [#semanitcsyntax].

In the work I do in eResearch systems and repositories, RDF is clearly a very good framework for extensible metadata, and the associated “Linked data” approach of using URIs to describe things and concepts is a good way to implement shared vocabularies, but RDF is very hard to get to grips with as a general modelling framework.

Now it’s time to over-simplify the process of getting data into web pages via schema.org et al.

*** At Tim Berners-Lee’s talk in Melbourne that night David Flanders asked him what advice he had for researchers re data – should they put it on the web?

Tim’s response was that researcher should work with their data in the format that suits them but they should get a ‘shim’ or adaptor built to provide an RDF interface to the data so others could use it as part of the semantic web.

I think that’s easy for Sir Tim to say and he’s right that it would be a Good Thing, but experience has shown that projects like that run to about $200K in Australia and don’t always get results, so I’d add “and while you’re working on the RDF adaptor, publish what you have in the format in which you have it with as much metadata as you can manage”.

****Good luck. If anybody comments at all it will be to ask “why didn’t you use the European/ISO/W3C Standard” (which will turn out to be a document that has been in development for 5 years but expected to be released in six months for the last four of those years) 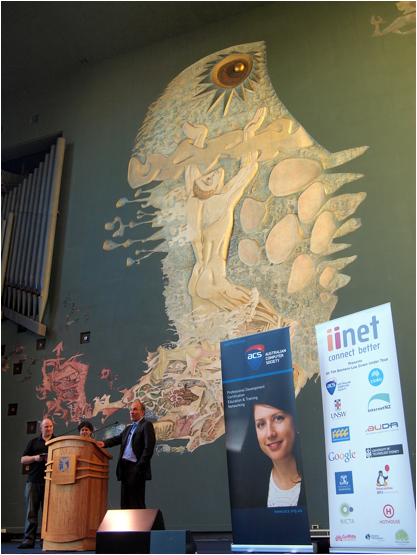 Figure 1 Tim Berners-Lee (right) dwarfed by the happy head on a sponsor's banner, which in turn is dwarfed by Art - at the University of Melbourne 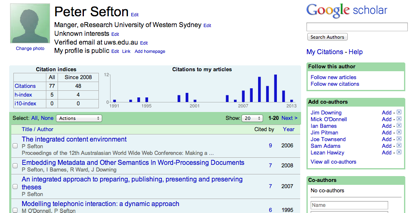 Worst-case: maintaining a web-load of converters – see this from a patch to keep the Zotero reference manager working with Google Scholar. Google changes their page? You change your code and redeploy to millions of people.

These are XPath expressions looking in the webpage for stuff that Google coded for their own reasons, probably to make it look right, not primarily for data interchange.

You see what’s happening there? Google indexes pages that conform to a standard they defined (not the one the repository community uses for its own interchange). Then to get the data back out the scholarly community has to keep track of a non-standard convention, again invented by Google.
#### Sounds like a case for Schma.org?

But don’t underestimate the power of commercial interests to distort the shape of the semantic web.

And of course we have multiple overlapping but incomplete standards, best practices, worst practices and flame-wars for both.

There are four basic ways to embed data into web pages.
#### Four ways to \#inlinedata
I have been working with researchers at the Hawkesbury Institute for the Environment at UWS and the technical folks at Intersect NSW to implement an HTML readme file to accompany environmental researcher data sets – we’re working on a case-study that goes into how we made the choice of RDFa (\#semanticsyntax) and how we chose which vocabularies and terms to use (\#sharedvocab) which we’ll publish as soon as possible.

^[i]^ Semantically rich? Look at the source – I’ve used a web-police-approved mechanism for embedding slides in my prose. That is, I have used a standard vocabulary (the bibliographic ontology #sharedvocab) and a syntactic specification (RDFa 1.1 lite #semanticsyntax) for saying that some parts of the page are special.