[This is a copy of a post on the jiscPUB project – if you have comments please do so over there: http://jiscpub.blogs.edina.ac.uk/2011/05/11/anthologize-a-wordpress-based-collection-tool/] In this post I’ll look at Anthologize. Anthologize lets you write or import content into a WordPress instance, organise the ‘parts’ of your ‘project’ and publish to PDF or EPUB, HTML or into TEI XML format. This is what I referred to in my last post about WordPress as an aggregation platform.

Anthologize was created in an interesting way. It is the (unfinished as yet) outcome of a one-week workshop conducted at the Centre for History and New Media – the same group that brought us Zotero and Omeka, which is one good reason to take it seriously. They produce very high quality software.

Anthologize is a WordPress plugin that adds import and organisation features to WordPress. You can author posts and pages as normal, or you can import anything with an RSS/Atom feed. The imported documents don’t seem to be able to be published for others to view but you can edit them locally. This could be useful – but introduces a whole lot of management issues around provenance and version control. When you import a post from somewhere else the images stay on the other site, so you have a partial copy of the work with references back to a different site. I can see some potential problems with that if other sites go offline or change.

Let’s remind ourselves about the use-cases in workpackage 3:

The three main use cases identified in the current plan, and a fourth proposed one: [numbering added for this post]

Many documents like (a) theses or (c) reports are likely to be written as monolithic documents in the first place, so it would be a bit strange to write, say, a report in Word, or LaTeX or asciidoc (which is how I think Liza Daly will go about writing the landscape paper for this project) , export that as a bunch of WordPress posts for dissemination, then reprocess back into an Anthologize project, and then to EPUB. There’s much more to go wrong with that, and information to be lost than going straight from the source document to EPUB. It is conceivable that this would be a good tool for thesis by publication, where the publications were available as HTML that could be fed or pasted in to WordPress.

I do see some potential with (d) courseware here – it seems to me that it might make sense to author course materials in a blog-post like way covering topics one by one. I have put some feelers out for someone who might like to test publishing course materials, without spending too much of this project’s time as this is not one of the core use cases. If anyone wants to try this or can point me to some suitable open materials somewhere with categories and feeds I can use then I will give it a go.

There is also some potential with (c), project reports, particularly if anyone takes up the JiscPress way of doing things and creates their project outputs directly in WordPress+digress.it. It would also be ideal for compiling stuff that happens on the project blog as a supporting Appendix. So, an EPUB that gathers together, say all the blog posts I have made on WorkPackage 3 or the whole of the jiscPUB blog might make sense. These could be distributed to JISC and stakeholders as EPUB documents to read on the train, or deposited in a repository.

The retiring academic (b) (or any academic really) might want to make use of Anthologize too – particularly if they’ve been publishing online. If not they could paste their works into WordPress as posts, and deal with the HTML conversion issues inherent in that, or try to post from Word to WordPress. The test project I chose was to convert the blog posts I have done for jiscPUB into an EPUB book. That’s use case (c) more or less.

How did the experiment go?

I have documented the basic process of creating an EPUB using Anthologize below, with lots of screenshots, but here is a summary of the outcomes. Some things went really well.

The good looks and simple interface are deceptive, lots of functionality I was expecting to be there just wasn’t – yet. I have been in contact with the developers and noted my biggest concerns, but here’s a list of the major issues I see with the product at this stage of its development:

For the use case of bundling together a bunch of blog posts (or anything that has a feed) into a curated whole Anthologize is a promising application, but unless your needs are very simple it’s probably not quite ready for production use. I spent a bit of time looking at it though, as it shows great promise and comes from a good stable. Here’s the result I got importing the first handful of posts from my work on this project. 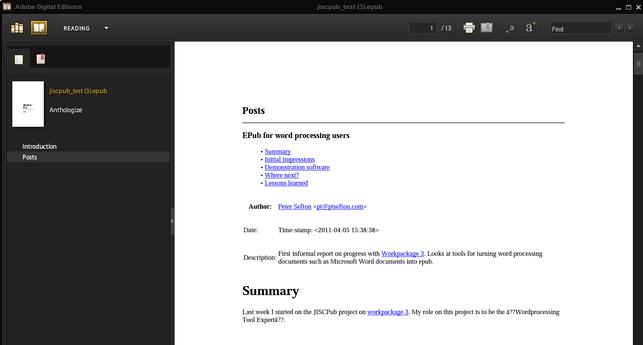 Illustration 1: The test book in Adobe Digital Edtions – note some encoding problems bottom right and the lack of depth in the table of contents. There are several posts but no way to navigate to them. Also, clicking on those table of contents links takes you back to tbe jiscPUB blog not to the heading. 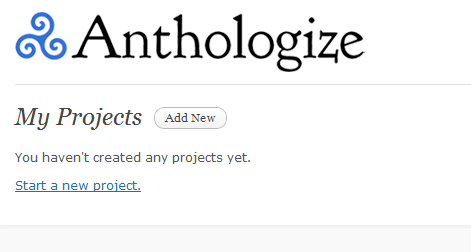 Illustration 2: Anthologize uses ‘projects’. These are aggregated resources, in many cases they will be books but project seems like a nice media-neutral term.

Illustration 3: A new project in a fresh WordPress install – only two things can be added to it until you write or import some content.

Illustration 4: Importing the feed for workpackage 3 in the jiscPUB project. http://jiscpub.blogs.edina.ac.uk/category/workpackage-3/feed/atom/

Illustration 5: You can select which things to keep from the feed. Ordering is done later. Remember that imported documents are copies, so there is potential for confusion if you edit them in Anthologize. 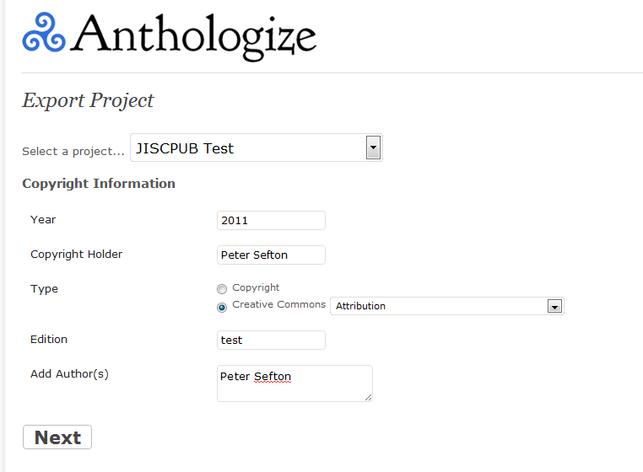 Illustration 6: Exporting content is via a wizard, easy to use but frustrating becuase it asks some of the same questions every time you export. 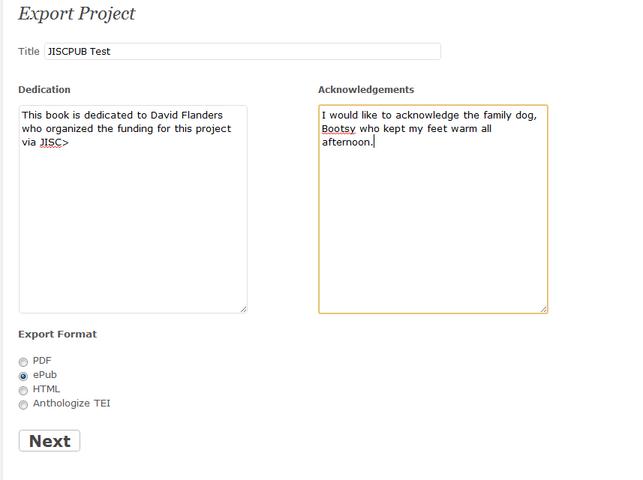 Illustration 7: Having to retype the export information is a real problem as you can only export one format at a time. Exported material is not stored in the WordPress site, either, it is downloaded, so there is no audit trail of versions. [This is a copy of a post on the jiscPUB project – if you have comments please do so over there: http://jiscpub.blogs.edina.ac.uk/2011/05/11/anthologize-a-wordpress-based-collection-tool/]