In this post I want to look at what makes the various kinds of “Open” tick.

Open CourseWare, Creative Commons, Open Source and Free Software are all frameworks for sharing various kinds of information-artefacts. (Open standards is a different kind of thing, which I won't be talking about here.) This is a different slant on the debate than “Here's why open is good” . I want to review: “What is this open?”. As with another recent post debunking reasons not to go open, I wrote this to help get my thoughts in order ready for Michael Sankey's OCW 'summit' which took place yesterday. There is some action on the long-stalled Open Courseware effort at USQ, and it's really exciting but it's not up to me to announce it, so I'll stick to theorising and opining.

I'll look at the backbone of the various kinds of 'open', then look at what I think some of the opportunities are from where I'm sitting.

Where am I sitting, you ask?

Y-block at the University of Southern Queensland's Toowoomba Campus, looking out towards the Japanese Gardens.

Why is this relevant?

OK, the gardens aren't. But Y-block is where the Distance and eLearning Centre resides, and where my team has its roots. The Distance and eLearning part is important. USQ is a distance-learning provider of some note, and as such has a rich collection of distance materials suitable for independent and isolated learners to study. Don't get me wrong, USQ does offer a very high-touch service to its off campus students, and not all courses are built around self-paced learning materials (which is why the 'business' won't come to an end if we release open courseware) but the distance-ready materials are a key asset. 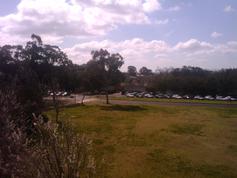 Illustration 1: The view from my window, the Japanese Gardens are beyond the parked cars

Fundamentals It's about © licenses

What's the foundation for these frameworks for sharing? This might be counter-intuitive to some, but it's the same thing as drives the sometimes brutal and voracious publishing, film, music and commercial software industries.

Richard Stallman invented open licensing when he created the GNU General Public License (GPL). Stallman showed how to create a mechanism for distribution of copyright works that guaranteed that the works would be accessible-to and usable-by other people. The key trick was to use the power vested in a copyright holder to say; “You have a license to use this stuff, and to change it, and to distribute it, and when you distribute it you must extend exactly the same terms to the others you share it with”.

Stallman had a mission to make stuff free, in his case software. That's free as in libre, as in freedom. He was interested in Rights for software users and creators, and made the GPL as infectious as possible so that worked to make more software free. But the legal mechanism he invented, the open license, enabled other approaches with other goals. For example in software, there is the Open Source movement, which is more pragmatically motivated.

You can read more about these concepts in a free online course: Introduction to Free Software from the Free Technology Academy [1], which is run by a consortium of universities. If you do their free online course, that counts towards Masters degrees at your pick of the host institutions.

This Free/Open thing is an important distinction. You could look at OCW in a Stallman-esque way from the point of view of public good. Generally speaking this is the MIT approach; “benevolent university contributes to the world”. Or, you could look at it from more of a 'business' perspective asking (to put it a bit gauchely); “what can I get out of this?”

I wrote last year about why I think we need to be very clear in Higher Ed when we frame arguments around open distribution of learning materials, because it's all too easy to talk about “Intellectual Property” and “protecting our IP”, just as Richard Stallman says. I argued that appeals to protecting IP in universities are actually pretty-much meaningless unless you (a) focus in on copyright or (b) take “Protect our IP” as code for “Manage our knowledge”, which is code for “Create a learning and sharing environment for our community”. I'm not going to win this one, I don't think, but I'll keep trying: Don't say Protect our IP, think about what you mean, and pick the right legal framework in which to talk about protection.2

Which means talking about copyright not Intellectual Property.

At USQ, broadly speaking IP, er sorry, copyright is assigned like this:

To learn more about all this, why not sign up for the September start of the course on Copyright 4 Educators at P2PU which uses a free text on copyright [2]?

What this means is:

With research publications, researchers typically sign away copyright in articles to publishers in exchange for the services rendered by the publisher, which include coordinating peer review and frequently selling the work back to the institution that produced it3. Sometimes, researchers get to keep their copyright post-publication for one reason or another and then they would be free to license it any way that they choose – that is as long as they had not entered into a contract with someone else, like say a publisher, not to.

In the Institutional Repository world, it's pretty standard for some version of a research article to be put up online, quite often without an explicit license, so 'officially' that means that fair-use or fair dealing applies. I thought that this was a bit of a problem as it left readers with no explicit licence to read – so a year ago when I put up a copy of an article I wrote that had been signed-over to an Elsevier journal I tried to ask them what license statement to put on my article. They ignored me. So I put it up on my blog but warned people not to read it.

Since attending a CAIRSS copyright workshop, led by our colleagues from Swinburne, though, I understand why repository managers and publishers live with this situation – nobody wants to have to deal with thousands of publishers and authors in working out explicit licenses. It makes sense to just take the permission from the publisher to put up a copy of the article, find the right version and run with it. Why am I mentioning this? Just to show that while copyright is key sometimes it's more practical not to worry about licenses or nothing would get done, and also to note that some of the decisions around copyright have a risk-management flavour, and that many of these kinds of discussions are best had in camera.

With courseware, at USQ – and I'm talking mainly about the quality-controlled distance-Ed stuff here – the default is that the university keeps the copyright and provides access for students; only the students who have enrolled in that course can see it.

Some materials do find their way onto web servers, pretty-much on the same kind of basis as repositories work, with no explicit license with an implicit expectation of fair-use although the copyright is very often also implicit – ie nobody put a copyright statement on it at all. In reality, who knows what happens to some materials. I've heard reports from some lecturers that they find their stuff being used all over the place.

What counts as OCW?

So what is OCW, actually? (The statement on the main OCW site is rather unhelpful) but this appears to be the policy:

OCW course materials are made available to the public under a license that:

I'm not sure if I have much of a conclusion to this little excursion, except that in discussions of OCW it's worth being aware of the underpinnings, and the other kinds of open licenses.

And it all comes back to copyright.

Copyright is all-important in open sharing systems. Whoever owns that can set license terms for others. Sometimes, it makes sense to assert your copyright (even though it is automatic in some jurisdictions) and not to specify a license, but if you want to play with the OCW or OpenSource crowd then you have to use a license of which they approve in order to join the group or use their branding.

This use of copyright to share something, seems to me to be pretty straightforward compared to most other aspects of IP law and even is certainly simpler than the issues we see in OA repositories, where we have to let some complex issues slide past, and in teaching and learning materials where we are unable to let anything slide, and have to go through very complex auditing processes.

There is an obvious advantage to being the one whose materials are out there being used. Your copyright statement, and maybe the license can act as a viral Internet advertisement. I'm not sure what is available in the way of open licenses that would specify not just that attribution is required but a particular form that attribution should take, such as leaving a logo in place. Anyone?

There are some potential deals to be done here – if USQ went with an open model then they could consider assigning copyright back to course writers, for example if they were able to get it accepted into a peer reviewed journal or published as a book.

One (unpopular) idea I raised at the summit was that we could release course materials (just as materials, not with support) complete with a reading list but with no readings, and any third-party copyright material greyed-out, with an invitation to sign-up as a student on some low-cost basis to see the missing bits. This is not an idea I like at all, but I think it will keep coming up if we pursue OCW on a broad scale.

A more noble idea and one that got more support at the summit would be to encourage our course-writers to develop 'clean' courses that don't have dependencies on things that collection agencies like CAL can take an interest in, but given our apparent dependency on third-part copyright materials that will be difficult. And I note, via Open Education News that when Michael Geist suggested a similar move in Canada recently he was called “irresponsible” and accused of “rabble rousing”. Geist's defence of open access materials is worth a read. In Australia at least, the collection agency has worked to get centralised deals which make it less attractive for one player to start reducing its dependency on third-party copyright materials.

1The software industry also involves patent law, too but we'll leave that one alone.

2 Turns out that at the summit, nobody really used the term, although if there had been more Deans or DVCs present I bet we would have heard it a few times. And when I asked a roomful of people if they could tell me what kinds of IP were protected under Australian law nobody spoke up – I must be scary, I'm sure they all know about at least copyright, trademarks and patents. (Answer is here ).